In ‘Grass,’ Sandburg’s speaker encourages the reader to remember the past, especially the parts that are the most difficult to face. He makes several allusion to historical places and events, ones in which many people died unnecessarily. The poem was published after the end of World War I in 1918 and very clearly addresses the horrors of the previous years. Unfortunately, the “war to end all wars” was not what it seemed to be. WWII was on the horizon, as were countless conflicts and wars around the world.

The speaker of this poem is revealed at the end of the first stanza. It is not a human being but “grass”. This technique, which gives grass human-like abilities, is known as personification. 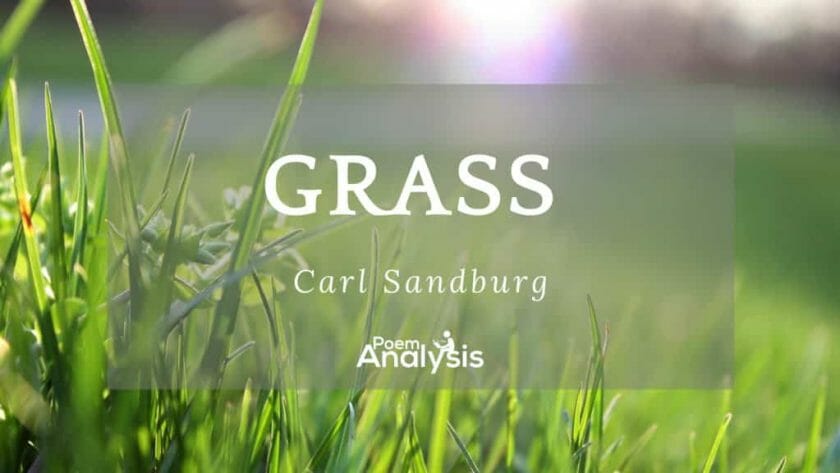 ‘Grass’ by Carl Sandburg is a deeply moving poem that addresses the horrors of war and human kind’s responsibility to never forget them.

In the first lines of ‘Grass,’ the speaker, grass, asks that it be allowed to do its job and cover up the bodies and history soaked battlefields around the world. When its job is completed, no one, two or ten years from now, will know what happened in these places. It is our job, as readers of this poem and people living in the world to make sure that we don’t forget the lessons of the past.

Sandburg engages with themes of memory/the past, war, and nature in ‘Grass’. These themes all come together to paint a picture of human forgetfulness and our desire to put the past behind us. But, by forgetting and allowing the grass to cover everything we suffered, we are liable to make the same mistakes over and over. If we had not lost hold of the terrible pain of the First World War would anything have changed during the Second?

‘Grass’ by Carl Sandburg is a three-stanza poem that is separated into one set of three lines (known as a tercet), one set of six (a sestet), and one final set of to lines (a couplet). These lines do not follow a specific rhyme scheme or metrical pattern, meaning that they are written in free verse. This was a common way of writing for Sandburg who wanted his poetry to lean more heavily on the content and imagery than on the structure of meter or rhyme.

‘Tone’ by Carl Sandburg presents the comments of the grass. As it has been hindered in its activities, its tone reflects disdain, disturbance, and distance. The speaker is disdainful for the aftermath of war. Likewise, the speaker is disturbed by bodies that are lying everywhere and demotivate its growth. At last, the magnitude of death doesn’t influence the speaker. It seems that “the grass” had been seeing such scenes from time immemorial. For this reason, it keeps his emotions at a distance while talking about dead bodies. There is also a tone of indifference and irony in the poem. The ironic tone of the poet is present in most of the lines like “Shovel them under and let me work”.

Sandburg uses several literary devices in ‘Grass’. These include but are not limited to anaphora, repetition, personification, and allusion. The first of these, anaphora, is seen through the repetition of words at the beginning of multiple lines of text. This is especially effective when the poem is quite short as this one is. Sandburg uses more repetition when he repeats the phrase “I am the grass” as a refrain.

Personification is one of the more obvious techniques at work in this poem. It is seen through the entire narration as the “grass” that grows around the world describes its intentions. Lastly, are examples of allusion. It is with this technique that Sandburg is able to make this poem as meaningful as it is. He alludes to various terrible battles around the world, requiring a bit of knowledge of history (the entire point of this poem) to fully comprehend his meaning.

Pile the bodies high at Austerlitz and Waterloo.

I am the grass; I cover all.

In the first line of this poem, the speaker, grass, commands that the bodies pile “high at Austerlitz and Waterloo”. This is a reference to famous battlefields from the Napoleonic Wars that took place in the early 19th century. The first, Austerlitz, is in Austria and the latter is in what is today Belgium. In both of these places, thousands of men died.

The grass, which grows unceasingly is willing itself up and over the metaphorical bodies that still rest there. They are “Shovel[ed]” under and lost. This is a metaphor for the way that humanity moves on from the horrors of the past as soon as they are out of sight. By taking this position, the grass/Sandburg is actually advocating for the opposite. He doesn’t want humankind to forget what happened in its bloodiest battles. Rather, he’d like everyone reading to learn from the past in order to keep it from repeating.

And pile them high at Gettysburg

What place is this?

Where are we now?

Due to the fact that there are more terrible battles to come, it’s obvious that the world did not learn its lesson from the Napoleonic Wars. The next places he mentions are Gettysburg, Ypres, and Verdun. Gettysburg was a battlefield of the American Civil War, located in Pennsylvania. The latter two, Ypres and Verdun, were battlefields of the First World War that Sandburg has just lived through. The first is in Belgium and the second in France. The names of these places should, without detail, bring to mind the wars or battles that occurred on and around them. They should, although they may not, serve as warnings for future generations about what can happen when humanity loses its way.

The grass makes several other commands, making use of literary devices such as anaphora and repetition. It asks that everyone who died, everything that happened, and all the lessons that should’ve been learned, be shoveled under the grass and forgotten.

Time passes at the end of this stanza and Sandburg reveals the truth of this practice of human forgetting. In a brief bit of dialogue, he brings in a scene in which a passenger on a train has to ask the conductor “What place is this?” and “Where are we now?” These striking questions get to the heart of why it’s necessary to remember one’s own history.

I am the grass.
Let me work.

The final stanza of ‘Grass,’ is indented far into the right. The two lines are short, to the point, and both use end-punctuation. The grass wants to “work” and allow history to slip beneath new layers of life. It’s our responsibility to remember the past no matter if we can see it or not.

There is sadly a plethora of wartime poems written by those who served in battle and by those who suffered in the absence of loved ones. Some of these include: ‘The Next War’ by Wilfred Owen, ‘War is Kind’ by Stephen Crane, ‘To Any Dead Officer’ by Siegfried Sassoon, and ‘August, 1914’ by Vera Mary Brittain. Also, make sure to check out our list of the 10 Best War Poems Ever Written.