Carol Ann Duffy takes the reader into what feels like a very personal and emotionally moving world in ‘Recognition’. Through a wide range of images and emotive states, she delves into themes of lost youth, age and time.

‘Recognition’ by Carol Ann Duffy describes the regrets one woman has for the way that her life has progressed and the person she has become.

Throughout this poem, the speaker struggles to recognize herself and remember the life she lived in the past. She goes through a number of different experiences, and her attempts to improve herself as a woman and partner to a man who she does not want to disappoint. The poem concludes with the speaker as an old woman apologizing to her younger self for the choices she made.

‘Recognition’ by Carol Ann Duffy is an eight stanza poem that is divided into sets of four lines, or quatrains. These quatrains do not follow a specific rhyming pattern but are often split in half.

The difference between the two halves of the stanzas is seen through a shift in the language used by the poet.  For instance, in the fourth stanza, the first two lines finish off thoughts from the third stanza and discuss emotional reactions to loss. The third and fourth lines come as a surprise, with “Quiche” as the starting word of the third line. Here, without breaking the format of the stanzas, Duffy interjects what seems to be a sense-memory.

In these moments as she considers the past, and how she felt and acted at that time, other memories come flooding in. Another example is in the fifth stanza with the use of the word “Shallots”. Her language appears sporadic and at some points verges on stream-of-consciousness.

Duffy also makes use of several poetic techniques that contribute to the poetic language of ‘Recognition’. These include alliteration, enjambment, and repetition. The latter is the most obvious and can be seen clearly in the last lines of the poem where Duffy makes use of anaphora. This is the repetition of a word or phrase at the beginning of multiple lines, usually in succession.

Additionally, Duffy uses and reuses the word “stared” in the last two lines, emphasizing the importance of the moment. When Duffy’s speaker encountered herself as a “dowdy matron” and was stared at, and stared back. Then, there is the repetition of “sorry” three times in the final line, ending the poem on a somewhat open note and leaving the reader to put the pieces together.

Another important technique that is commonly used in poetry is enjambment. This occurs when a line is cut off before its natural stopping point.  It forces a reader down to the next line, and the next, quickly. One has to move forward in order to comfortably resolve a phrase or sentence.  For instance, the transition between the last line of stanza seven and the first of stanza eight.

Last, there is alliteration. It occurs when words are used in succession, or at least appear close together, and begin with the same letter. For example, “compassionless’ and “claret” in the sixth stanza and “blond boy” in the fourth stanza.

In the first stanza of ‘Recognition’, the speaker describes the fact that she seems to have lost the point, or direction, of her life. There are a number of elements of her life which she has either lost track of, or she no longer knows how to consider. She feels this distinctly as having “let [herself] go.” It is as if she has made a mistake, lost her care.

In the third and fourth lines of this stanza, she references her children as a part of this loss. She has “had three,” but does not know them. She has either not taken the time, or lost track of their progress.

In the second stanza, the speaker transfers her worry over to her own body. She is looking back on the life she has lived and is attempting to recall her past. She states that she “strain[s] to remember a time,” when her body felt different than it does now. The speaker wants to remember when she felt “lighter.”

This concept of “light[ness]” is most likely in reference to both her physical body and her mind. The next line begins with the word, “Years,” expanding lightness to encompass her whole life. She longer feels the freedom and openness, and possibilities of the coming years.

The speaker goes on to reference the way that her face has “swollen.” It is not filled with stress or age, but “regret.” This line leads into the third stanza describing how she attempts to hide this feature.

The speaker “put[s] powder” on her face, but it does nothing. It only “flakes off,” rather than covering her skin as she would wish. There is no way for her to hide what her life has come to.

Additionally, it is important to note that this speaker’s first reaction, and instinctual attempt to rectify the “swollen” aspects of her face, come from makeup. She is trying to make herself more attractive, hoping that it will improve her life.

‘Recognition’ continues on, and another character enters into the drama. The speaker refers to a man, “him,” whom she has loved. She no longer feels the passion she used to. It is a love that comes from “habit.” There is no “proof” of the relationship she used to have with this unnamed man.

This man is frustrated by the trajectory of his partner’s life. He “gets upset” because things aren’t how they used to be. In an attempt to remedy this feature she says she has done “all the essentials.”

These “essentials” that she mentions in the third stanza of ‘Recognition’ are defined and contained to “one trip.” It was on this trip that she tried to do what was expected of her. She knows that this choice might have been a “Foolish” one, but all the same, she tried. The reader gets no more information about what these attempts were, except for one word, “Quiche.” This might lead a reader to feel that she did everything she believed a proper wife, or female partner, should do. This might have involved cooking breakfast, in this case, “Quiche.”

As has become the pattern in this piece, the next two lines jump to another memory. This one is of the time that she met this man with whom she is slowly separating or breaking. He was a “blond boy” then and he promised her “the earth.”

Her partner was idealistic in his vision and she saw him in a similar light. From just these few words it is clear that when she entered into the relationship she was not considering the deeper problems she might confront.

While considering the memories that were mentioned in the previous stanzas, she speaks directly to the reader and says that “You see this came back” to her while she was standing “on the scales.” Once more the poet is fusing a mental and physical barrier. She is not standing on a “scale,” but on “scales.” This brings the mind the concept of decision-making and the choices that she is having to, and will have to make in the future.

It is impossible to escape the reference to femininity and the pressure to maintain weight, youthful beauty, and a certain way of being. One more single word interrupts the lines here, “Shallots.” This is another reference to her attempts to conform to this norm and cook as she believes she is supposed to.

This is expanded on in the following lines when she looks in the “window” and sees the “creamy ladies” who are stuck, holding “a pose.” This is a moment in which the speaker is seeing into a life that she could have had. She sees what she is traditionally, supposed to be, and knows it for what it is. Her reactions to this encounter are detailed in the next stanza.

After the speaker was looking in on the “creamy” ladies she left feeling “clogged and old.” She reacted, as society would have her, to see what is deemed a proper life. When she observes others, whose lives seem to be better and more beautiful than hers, she feels worse about herself.

The next line begins with, “The waste.” She sees herself in this light as if she has thrown away her life. This is embodied in a moment she describes in which she “fumble[s]” with her “purse” in a store. This is spoken of as being a tragedy as if no real woman would make this mistake. The “shopgirl” provides her with the reaction she is expecting.

What should be a simple moment in life, sends this speaker into a state of excitement.

The narrator of ‘Recognition’ leaves the store in which she was shopping, the home she was living in, and the structured life she was leading, and lays  “in [her] slip on wet grass.” She disregards the norms of her world, wears only her slip, or under-dress, and enjoys the feeling of the water soaking through to her skin. This whole event is prefaced by the phrase, “It did happen.” This might make a reader doubt that it truly has.

This is a very real moment in her life, especially in comparison to the interaction she had with the shopgirl. She is feeling something that is real and truly physical. It contrasts with the “loss” she felt at the beginning of this piece.

She reacts to this contrast by laughing. She releases all the years of her life she has suffered through in constraints. Her released emotions are “blind” and “hot.” They’re real, and new, and unstructured. They come out of her without direction and “bump” into another embodiment of life.

This second embodiment is her life as it really is. Her emotions collide with “an anxious, dowdy, matron,” the worried nervous woman that she has actually grown up to be. In the seventh stanza, the speaker began her story with the phrase, “It did happen.” With the addition of the eighth stanza it becomes clear that she did not have this release of emotions, or if she did, it was so far in the past she no longer experiences the benefits of the moment.

She has become what she most feared, the “cold” unfeeling woman who strains to remember her past. The speaker imagines this woman reaching out to her own reflection, touching the glass and staring. She speaks the final words of the poem, apologizing for the life she has lived. 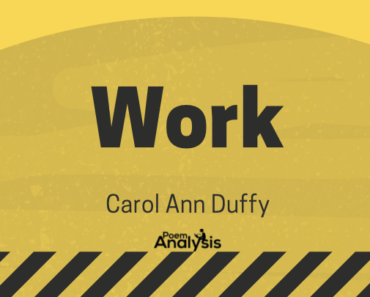 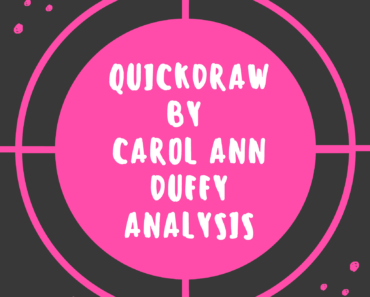