The Virgin’s Memo by Carol Ann Duffy explores a memo written from Mother Mary to Jesus, which is subsequently ignored. Duffy writes this poem to display the total disregard of the female opinion and perspective, beginning right at the start of history and continuing onwards. Duffy wants the reader to realise how sexist society has been (and still is), using this poem to display how female opinions are ignored and subsequently lost to history. 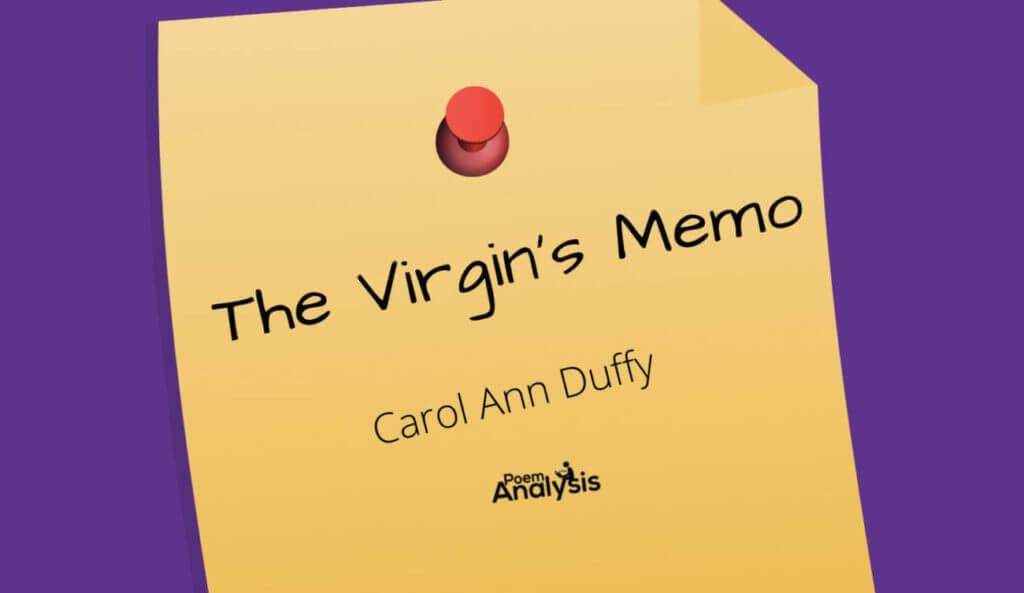 The Virgin’s Memo by Carol Ann Duffy uses the structure of the ABCs, with Mary writing a memo for Jesus of all the things that he should change within the world. Duffy begins with ‘abscesses’, moving right down through the alphabet until she gets to ‘W’, at which point the text becomes ‘illegible’ for the last few letters. Duffy presents a detailed list of ideas, all of which are completely ignored by Jesus. In doing this, Duffy suggests that males don’t care about female opinions and that the female voice is lost within history. Even an important figure, the Virgin Mary, doesn’t matter in the grand scheme of things, she, too, being a woman ignored.

Duffy’s The Virgin’s Memo uses structure to present the thoroughness of Mary’s work. She has constructed an alphabetized list of things that Jesus/God should change. Yet, reading this from the modern age, we know none of these things have stopped existing, therefore she was ignored. Duffy uses this fictional account to showcase the voicelessness of women, their opinions being ignored throughout history. Duffy uses the A—>Z structure and one stanza to emphasize how easily Mary has made it for Jesus. Yet, even after all of this planning and structure, she was still not listened to.

Structural is integral to the reading of The Virgin’s Memo, with Duffy also using asyndeton to further her fictional recommendation. By structuring the poem as an asyndetic list, Duffy suggests that there are a huge number of things that Mary recommends Jesus to change. This shows how corrupt and ridiculous the ‘God Made’ world is, with Mary wishing for a huge number of changes. At the same time, this listing also furthers the idea that Jesus/God listened to none of Mary’s recommendations, even the one thing she did think was good, ‘Unicorns’, obviously didn’t make it into the final draft of the world. This listing seems to go on forever, asyndeton furthering this idea.

Another technique that Duffy uses modality. With the word ‘maybe’, Duffy is using modal verbs (such as ‘ can/could, may/might, will/would, shall/should and must’) in order to express hesitance. The female passivity is insinuated through this slightly doubting vocabulary, Mary recommending, but not demanding changes. This modality also expresses a sense of kindness, Mary not being tyrannical, but rather logical, in her desire to remove things like ‘cancer’ from the world.

Two key things are conveyed through the title, the first being the speaker and the second being the sense of importance this fictional note contains. Duffy instantly alerts the reader to the fact that it will be the ‘Virgin’ Mary writing this note, using biblical allegory to craft her poem. Yet, by using ‘memo’, Duffy attaches a sense of lacking importance to the poem, demands or suggestions being disempowered through the irrelevance of a ‘memo’. This demonstrates how women’s voices are not taken seriously by men, all of Mary’s recommendations being ignored by Jesus.

Duffy begins with the modal verb ‘maybe’, instantly signaling that Mary’s recommendations come from a place of being polite. Perhaps Duffy is tapping into the idea that women are taught to be polite and passive, rebelling against this in her anthology.

The poem begins with the assonance of ‘a’, both starting the ABC structure of the poem and also giving a sense of cohesion to the opening. Indeed, the use of assonance links these three ideas together, furthering the idea that Mary has planned out her recommendations with careful detail, even alphabetizing everything. This ABC form could also be linked to the young age of Jesus, Mary writing this ABC in a way of alerting the young baby to the structure of their language.

Duffy mainly characterizes Mary as focusing on horrors of the world, wishing to eradicate ‘cancer/or diarrhea/or tinnitus’, different forms of physical afflictions. It seems that Duffy presents Mary as wanting a better world for everyone, free of disease and suffering. Considering that none of these changes were listened to by Jesus. Duffy could be signaling that men do not have the salvation of the many as one of their core values.

Duffy represents the loss of the female voice within history throughout these lines. The use of ‘illegible’ connects with the idea that women were not taught to read and write, meaning that the memo Mary’s has constructed is imperfect due to Men deciding that women didn’t need an education. Duffy points to the barbarism of this, furthering this idea by similarly introducing ‘untranslatable’, another moment of the obfuscation of the female voice. Indeed, it seems that whoever documented this memo didn’t take the time to properly read through the female written note, instead skimming and leaving things ‘illegible’ and ‘untranslatable’ – signaling that people do not value the female voice.

maybe not leprosy or lice,

Duffy continues through her alphabet of Mary’s recommended changes to the world. Eventually coming to ‘rattlesnakes,//shite’. The connection of the expletive with the image of a ‘snake’ bears connotations of the Garden of Eden and original sin. It seems that Duffy is satirizing the bible, pointing out how inherently sexist the story which places the whole of sin on women’s backs is. Duffy’s use of ‘shite’ could be her own interpretation of the biblical passage, laughing at the sexism of the bible.

and maybe hand fire on the tarantula,

Duffy presents the first image of something that Mary enjoys, ‘the unicorn’s lovely’, with this furthering the idea that Jesus doesn’t care for female opinions. Indeed, the only thing that Mary states she enjoys within the world is something that doesn’t exist, with Duffy pointing out how women’s voices are ignored and deemed as less important.

Along the final three lines of the poem, Duffy repeats earlier techniques to symbolize how the disregard of the female voice is something that extends onwards throughout time. The poem finishes with an ellipsis, emblematic of how this endemic of ignoring female opinions has continued long into the future. The two proceeding images, ‘text illegible’ and ‘untranslatable’ are repeated from earlier int he poem, furthering undermining the importance of the female voice. The poem has 26 lines, one for each letter of the alphabet.