Carolina Norton was born in London, England in March of 1808. She was the daughter of Thomas Sheridan, an actor, soldier, and administrator, and Caroline Henrietta Callander, a novelist. Her parents were Irish and Scottish and both came from upper-class families with a decent amount of wealth. 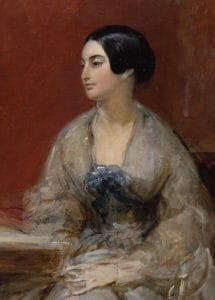 When Norton was still very young her father died in South Africa where he was serving as the colonial secretary at the Cape of Good Hope. After his death, the family’s wealth fell into disrepair and they were only saved by Prince Fredrick who was an old friend of Norton’s grandfather. He found a way for the family to live at Hampton Court Palace for the next several years.

Norton was one of three sisters who were eventually referred to as the “Three Graces” due to their combined beauty and accomplishments. The eldest was Helen, and the youngest was Georgina. Both sisters married into upper-class families. Helen’s husband served as the third Governor-General of Canada and the eighth Viceroy of India and Georgina’s was the 12th Duke of Somerset.

In 1827 when Caroline was nineteen she married George Chapple Norton, an M.P. for Guildford. The two did not have a happy relationship as George was often intoxicated and prone to fits of jealousy. His rage brought on bouts of mental and physical abuse. Additionally, George’s career as a barrister was unsuccessful, leading to a great deal of money trouble.

It was two years later, in 1829, that her first collection of poetry, The Sorrows of Rosalie: A Tale with Other Poems, was published. The work was received well by readers and critics.  It was soon followed by I Do Not Love Thee, The Cold Change, and The Undying One and Other Poems. The latter was a romance crafted around the legend of the Wandering Jew, a mythical man who taunted Jesus on the way to the Crucifixion and was then cursed to walk the earth.

Although plagued by an abusive husband, Caroline Norton still managed to establish herself within society. She was a respected society hostess, using her political connections to her advantage. Norton was known for her candid speech, a feature that made her both enemies and admirers.

Throughout these years of her life, she became friends with a number of prominent individuals, such as the future King Leopold I of Belgium and William Cavendish, 6th Duke of Devonshire. Norton’s influence in society even managed to secure her husband a job as Metropolitan Police Magistrate. Finally, after enduring years of abuse, Caroline left her husband in 1836.

Her career as a writer allowed her to sustain a decent living but her husband, in spite and injured pride, claimed her earnings as his own. This argument was deemed correct and she was forced to turn over everything to George. In an effort to take back some measure of control, Caroline began spending outrageously and then sending the creditors to her husband, as he was the one in control of the money.

The two were not quite finished with one another yet. George Norton chose to abduct their sons and hide them with relatives in Scotland. He did not tell Caroline where they were and instead tried to blackmail the then Whig Prime Minister Melbourne with whom he believed Caroline was having an affair. Melbourne refused to pay and Norton took him to court. The judge threw out Norton’s claim after nine days but the publicity was disastrous for the government.

After the Melbourne Scandal, Caroline’s reputation was ruined and she still could not see her sons. Due to English law at that time, there was nothing she could do as they were deemed the property of her husband. The youngest child, William, died in 1842 after a fall from his horse. She believed he was not properly treated and should not have died from his injuries. Her eldest son, Fletcher, died a number of years later of tuberculosis, and her remaining son, Thomas died in 1877, due to a life long illness. All three died before their mother.

In the later years of her life, Caroline maintained a relationship with the politician Sidney Herbert. This lasted for five years before Herbert married. It was due to Caroline’s political advocacy during her life that the Custody of Infants Act 1839 was passed as well as the Matrimonial Causes Act 1857 and Married Women’s Property Act 1870.

George Norton finally died in 1875 and she was free to marry again. She chose Sir. W. Stirling Maxwell, a Scottish historian. Unfortunately, Caroline died three months later in June of 1877.