The Black Heralds by César Vallejo

‘The Black Heralds’ was published in a volume of the same name. It is one of the most important books of poetry in Latin American literature and is remembered for its original approach to illustrations of culture, religion, and history. ‘The Black Heralds’ is the first poem in the collection and serves as an introduction before the following six sections. 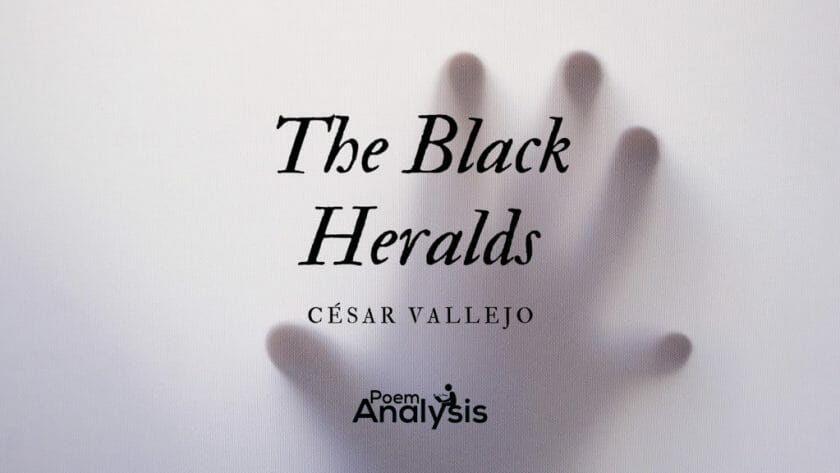 Summary of The Black Heralds

‘The Black Heralds’ by César Vallejo is a complex poem that describes the intensity of human suffering and explores its source.

Throughout this poem, the poet uses religious imagery to describe the terrible suffering that humankind goes through. It is so much that it’s hard to describe or pin down. He attempts to do so, depicting it as an undertow and the falling of Christ from the soul. He also uses the imagery of “black heralds” from death and a large guilty tear that represents everything that a “man” has lived.

Themes in The Black Heralds

In this poem, Vallejo explores themes of religion, suffering/sorrow, as well as violence. The latter, violence, is seen through the power and hateful nature of the universe. In the poet’s landscape, the world is out to get you. There are suffering and sorrow around every corner. It is represented as a “blow” to life that comes over and over again, wearing you down.

Religion is also quite important in this piece. Throughout, the poet references God, how moments in life are like being hated by God, and the answers that religion may or may not have.

Structure of The Black Heralds

‘The Black Heralds’ by César Vallejo was originally written in Spanish. This means that the version that we have in English does not follow the same rhyme scheme and metrical pattern. In the Spanish version, there is a structured rhyme scheme that follows a pattern of ABCB throughout most of the stanzas.

Literary Devices in The Black Heralds

Vallejo makes use of several literary devices in ‘The Black Heralds’ that are still obvious despite the translation into English. These include but are not limited to repetition and figurative languages, such as similes and metaphors.  There are also many allusions used within ‘The Black Heralds’. This technique can be seen through the various references, oblique and less so, to religion, specifically Christianity.

One of the clearest examples of figurative language comes at the end of the poem when the poet uses both metaphors and similes to describe the life a man lived and the guilt he feels. These things are compared to a tear that’s welling up in his eye.

Repetition is quite obvious in ‘The Black Heralds’.The poet chose to repeat the phrase “I don’t know!” three times in the poem. plus, the entire first line is repeated in full at the end of the poem.

There are blows in life, so powerful… I don’t know!

Blows s from the hatred of God; as if, facing them,

the undertow of everything suffered

welled up in the soul…I dont know!

In the first lines of ‘The Black Heralds,’ the speaker begins with a very famous line. H is thinking about his life, and life in general and exclaiming over how frustrating and painful it is. It ends with the phrase “I don’t know!” A very pure statement of exasperation. Through the use of ellipsis, the poet is encouraging the reader to hear the speech patterns of the speaker. He is trailing off as if he doesn’t know what to say and then expresses that very sentiment.

The “blows” mentioned in the first line are described as being similar to “the hatred of God” in the second line. The speaker compares life, through this simile, to what it would be like to have God hate you. Suffering grows in the soul and threatens to pull you out deeper, like the undertow of the ocean. The speaker’s desperation comes through clearly in the fourth line with the repetition of “I don’t know!” Nothing has been resolved, his own words have made nothing clearer to him.

They are few; but they are… They open dark trenches

in the fiercest face and in the strongest back.

Perhaps they are the colts of barbaric Attilas;

or the black healds sent to us by Death.

The opening lines of the second stanza are still talking about the ”blows” f life. He compares them in these lines to “Dark trenches” that are opened up by a plow. These are seen int he “most ferocious face and the most powerful loins”. The latter is sometimes translated as “the strongest back”. This leads to different interpretations, but both suggest time taking its toll of those living through it and an intense kind of suffering that causes wrinkles, or even something worse, like the marks of a whip.

He wonders in the third line if the blows are like the “wooden horses of barbaric Attilas”. This is a great example of an allusion. It references, most likely, the horses of Attlilla the hun. Or, alternatively, the speaker says, these blows might be the “black heralds” that come from “Death”. The force of “death” is personified, as seen through the capitalization of the first letter. This is a very common practice that helps the reader envision death as something with agency. It can reach out and take someone or send out “messengers” or heralds.

They are the deep falls of the Christs of teh soul,

of some adored faith blasphemed by Destiny.

Those bloodstained blows are the crackling of

bread burning up at the oven door.

The speaker continues the religious imagery into the third stanza where he refers to the “lapses” or “falls” “of the soul’s Christs”. He is still talking about the “blows” from the first line of the poem. A reader should make sure to take note of the use of the word “Christs” rather than “Christ”. He is referring not just to Jesus Christ, but to anything that the soul believes in. The things that one centers their life around. These things that humans hold close to their hearts and souls are lapsing or falling.

He adds that destiny is blaspheming against God. This makes it seem as though humans have no way out of their situation or a way to avoid the “blows” of God. No matter what one does, it seems, the world will hit you down.

The “bloodstained blows” are like the “crackling of  / bread burning up at the oven door”. The bread is almost out of the oven and then bursts into flames right as it’s in your grasp. Vallejo’s speaker sees life and the blows it throws in the same way. A reader should also link the image of the bread in this line to the images of Christianity that are scattered throughout the poem. Bread, as the body of Christ, is integral to a religious ceremony. It is a source of hope and faith that’s destroyed in this image.

And man..Poor…poor! He turns his eyes, as

when a slap on the shoulder summons us;

turns his crazed eyes, and everything lived

wells up, like a pool of guilt, in his look.

The final quatrain of the poem begins with more ellipsis. The speaker describes “man” as “poor”. The word is repeated here, emphasizing its importance and truth. This man “turns his eyes” and in them, you can see everything that he has ever experienced, or “everything lived”. It all “wells up, like a pool of guilt”. This is a great example of a simile and it is connected to a metaphor that compares everything the man has “lived” to a tear that’s growing in his eye.

The reference to guilt in the last line of the stanza is important. This man, who represents all humans, feels guilty for a reason the isn’t clearly stated. But, it is likely that Vallejo was thinking back to original sin and the guilt that Christianity says that all humans bear for what happened in the Garden of Eden. So, it is as if the man deserves all the suffering that he has to contend with.

There are blows in life, so powerful…I don’t know!

The fifth stanza is only one line long. It is a repetition of the first line of the poem, bringing the reader back around to the idea that suffering and its purpose are hard to pin down.

There are so many interesting and moving poems that consider religion, God’s control or lack thereof in the world, and the unity of human suffering. Some of them include ‘Any Human to Another’ by Countee Cullen, ‘On Another’s Sorrow’ by William Blake, and ‘Lady Lazarus’ by Sylvia Plath. The latter is very clear, and even troubling, a depiction of a desire for death.