Charles Dickens was born in Landport, Hampshire, England in February of 1812. He was the second of eight children born to father, John Dickens who was a clerk in the Navy Pay Office, and mother, Elizabeth Dickens. When Dickens was still young the family moved to Chatham, Kent. It was here that Dickens lived until he was eleven years old. The young Dickens was passionate about reading, enjoying novels such as The Arabian Nights and Robinson Crusoe.

The life of the Dickens family was quite turbulent, in that John Dickens was often relocated by the Navy Pay Office. 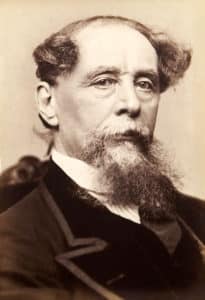 They were also living far beyond their means, resulting in the arrest of John Dickens in 1824. He was imprisoned in Marshalsea debtors’ prison in Southwark, London. Charles Dickens was 12 years old at this time and boarded with a family friend in Camden Town, then later in an attic room in Southwark.

Although he was still a child Dickens was forced to leave school and work at a local blacking warehouse. This experience, along with many others from his youth, made its way into his later works and provided the inspiration for his fervent hatred of workhouses and care for the poorest in society. Only a few months later Dickens’ mother died, leaving behind enough money to free John Dickens from prison. This also resulted in Charles returning to school at fifteen. He was able to find work first as an office boy and then later as a freelance reporter and stenographer.

Within five years he had become a contributor for two London newspapers, signing his sketches of London life and society as “Boz.” This work would be compiled into his first collection titled, Sketches by Boz in 1836. This work was followed by The Posthumous Papers of the Pickwick Club (published in monthly installments) and Dickens’ marriage to Catherine Hogarth. Their first of ten children was born in 1837.

Dickens’ first complete book, Oliver Twist, was published in 1837. It showed the true passion that Dickens had for the plight of the poor. It was also around this time that he was working as the editor of Bentley’s Miscellany. He would work for the publication for three years until he fell out with the owner. Dickens had become wildly popular, so much so that he toured America for five months. He gave lectures speaking out against slavery and social injustices. This tour had followed a number of less successful novels which included, Nicholas Nickleby, The Olde Curiosity Shop, and Barnaby Ridge: A Tale of the Riots of ‘Eighty all published from 1838 to 1841.

The successful tour of America ended with his return to London and the publication of American Notes. A book that criticized the American way of life for being too materialistic and wealth focused. It was not received well. Nor was his next novel, Martin Chuzzlewit. It was soon after this that his first Christmas novel, A Christmas Carol was published. This extremely popular work is now credited with establishing many of the enduring traditions of Christmas in American and Britain.

In the 1840s, Dickens lived in Italy and Switzerland and wrote the works Dombey and Sons and David Copperfield. This period is considered to be Dickens’ most mature as his novels became more serious. He also took up the editorship of Daily News which advocated for liberal social reforms.

In the 1850s Dickens and his family moved to Tavistock House where he wrote some of his best-known works, including some of his poetry. These included Bleak House, Hard Times, and Little Dorrit. The now very wealthy author hired actors and actresses for a play written by his close friend, Wilkie Collins. One of these women turned out to be Ellen Ternan, whom Dickens would love for the rest of his life. He separated from his wife in 1858 and never saw her again. Due to the fact that only a few letters belonging to the writer survived, it is unclear what kind of relationship, if any, he maintained with Ternan.

In an effort to once more secure his finances, Dickens embarked on another series of tours, the first of which lasted from 1858 to 1859. His final novels, A Tale of Two Cities and Great Expectations, were published in 1859 and 1861; both of these novels were great successes. He also continued to contribute to journals.

In the years that followed, Dickens was involved in a deadly railroad crash and took a second tour through the United States. He was quite unwell at this time, almost unable to eat solid food.  He also embarked on a “Farewell” tour of England, Scotland, and Ireland. In June of 1870, Dickens suffered a stroke after writing full-time on his unfinished novel, Edwin Drood. Dickens never regained consciousness. He was buried on June 19th in the Poets’ Corner of Westminster Abbey.