Brontë’s ‘Parting’ depicts a lover’s thoughts on what separation means for her relationship.

Throughout ‘Parting,’ readers are treated to interesting examples of similes and imagery, as well as other examples of figurative language. Brontë uses fairly clear language throughout, meaning that there is little room for interpretation when it comes to the content of the poem. Despite this, the exact nature of the relationship and the reader for their separation might strike the reader in different ways. 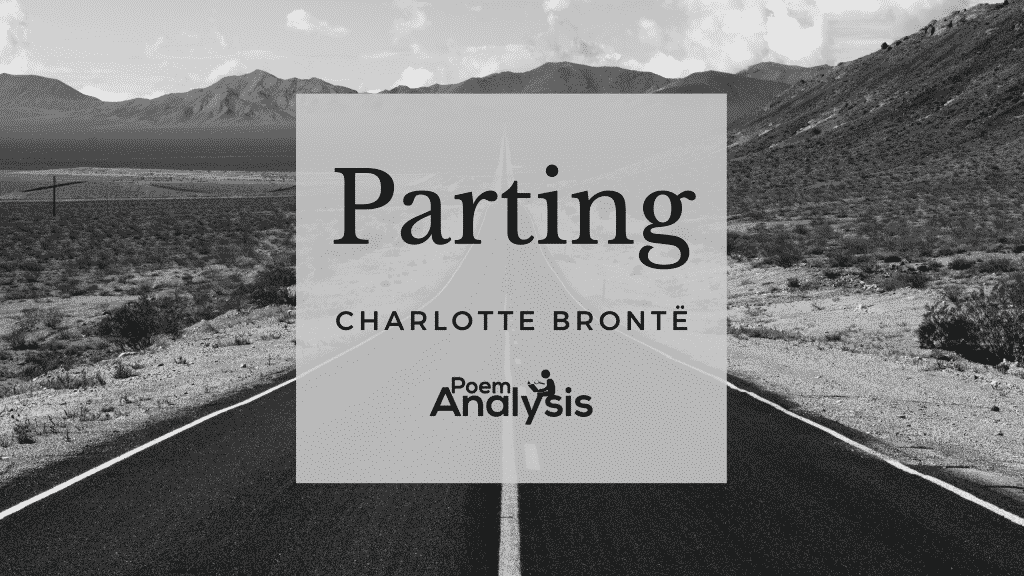 ‘Parting’ by Charlotte Brontë is a poem about separating from a lover, the power of thought, and memory.

‘Parting’ is an eight-stanza poem that is divided into sets of four lines, known as quatrains. Throughout this poem, Brontë’s speaker describes her relationship to the listener, someone who is easily described as her lover. The two are forced to part from one another, but the speaker knows this isn’t the end. No matter how far they go or what boundaries the world puts up in their way, they still have their memories. Plus, when feeling most alone, they can send out their thoughts to one another and be together as they used to.

Brontë engages with themes of love and distance in ‘Parting.’ The poem’s main themes are clear from the first lines as the speaker describes the forced separation she and her lover are enduring. The two want to be together, but due to fate and the real world, they’re condemned to part. Despite this, she channels her memories and hopes for the future to remain optimistic. She realizes that they can still be together, even when apart, though their similar thoughts.

‘Parting’ by Charlotte Brontë follows a simple rhyme scheme of ABAB, changing end sounds from stanza to stanza. This is a very common rhyme scheme when a poet is using quatrains to structure their stanzas. Readers should also note the use of synecdoche to create the perfect rhyme at the end of the second line of the second stanza and examples of half-rhyme that can be found throughout the poem. Brontë uses an unusual arrangement of stresses throughout ‘Parting’ with the lines ranging between six and nine syllables per line, with the majority lasting for seven beats. This is enhanced by the inconsistent use of stresses throughout. For example, the difference between line four of the first stanza and line one of the first stanza. The former mostly uses iambs while the latter uses trochees.

Brontë makes use of several literary devices in ‘Parting.’ These include but are not limited to alliteration, anaphora, and parallelism. The latter is a formal technique that occurs when the poet uses the same form from one line to the next. For example, the first two lines of the fifth stanza begin: “Every glorious sight above us,  / Every pleasant sight beneath.”

Anaphora is one kind of repetition. It occurs when the poet uses the same word or words at the beginning of lines. For example, “There’s” in stanza one and “We’ll” in stanza two. There are several other even more obvious examples later on in the poem.

Alliteration is another kind of repetition. It occurs when the poet repeats the same consonant sound at the beginning of words. For example, “world” and “worst” in line four of the second stanza and “friend” and “far” in stanza four.

There’s no use in weeping,

Though we are condemned to part:

There’s such a thing as keeping

A remembrance in one’s heart:

In the first stanza of ‘Parting,’ the speaker begins by telling her speaker, someone who is very likely her lover, that there’s no use in their weeping. They are condemned to be apart from one another, but it’s possible that they maintain their love, at least in some form, in their hearts.

The word “condemned” is an interesting choice. It makes clear that this separation is not one that either party chose. They’ve been forced apart as one would be forced to endure a prison sentence. It’s clear that the poet was hoping to include an allusion to punishment in these lines. Despite this, there is also a feeling of hope. All is not lost.

There’s such a thing as dwelling

On the thought ourselves have nurs’d,

And with scorn and courage telling

The world to do its worst.

We’ll not let its follies grieve us,

We’ll just take them as they come;

And then every day will leave us

A merry laugh for home.

In the second stanza, the speaker picks back up by adding that there’s the possibility that rather than dwelling in their sorrow over their loss of one another, they can fight back with their enduring love. They have “nurs’d” a love for one another that’s stronger and more important than the separation that now exists. They can use that strength to tell the world to “do its worst.”

In the third stanza, the speaker goes on to say that they’ll take their lives one day at a time. They’ll do what they can t make their lives as good as possible.

When we’ve left each friend and brother,

When we’re parted wide and far,

We will think of one another,

As even better than we are.

Every glorious sight above us,

Every pleasant sight beneath,

We’ll connect with those that love us,

Whom we truly love till death !

In the fourth stanza of ‘Parting,’ the speaker alludes to a time in the future when they’ll leave behind friends and brothers and parted from one another “wide and far.” Then, they’ll look back on their relationship and their love as “even better than we are.” The distance makes things look even better and stronger than the speaker knows they are.

The next lines suggest that the speaker and her listener/lover, as going to be able to tap into their histories together, make even bright by distance, and love one another purely.

In the evening, when we’re sitting

By the fire perchance alone,

Then shall heart with warm heart meeting,

Give responsive tone for tone.

We can burst the bonds which chain us,

Which cold human hands have wrought,

And where none shall dare restrain us

We can meet again, in thought.

As Brontë continues her poem, her speaker creates the image of a night in which they sit separate from one another and look back on their love. They can destroy their bond and connect in thought. There is nothing the world can do to stop their meeting in that way.

So there’s no use in weeping,

Never doubt that Fate is keeping

The eighth stanza of the poem is similar to the first in that the poet uses the phrase “So there’s no use in weeping” and asks her speaker to look at life as cheerfully as possible. She wants to remind them that “Fate” has their hearts in its keeping. The future is still waiting for them.

Readers who enjoyed ‘Parting’ should also consider reading some of Charlotte Brontë’s other best-known poems. For example: