‘Vultures’ is one of the famous poems of the Nigerian poet Chinua Achebe. It is a dark and somber piece that focuses on the Belsen concentration camp and a commandant who works there. 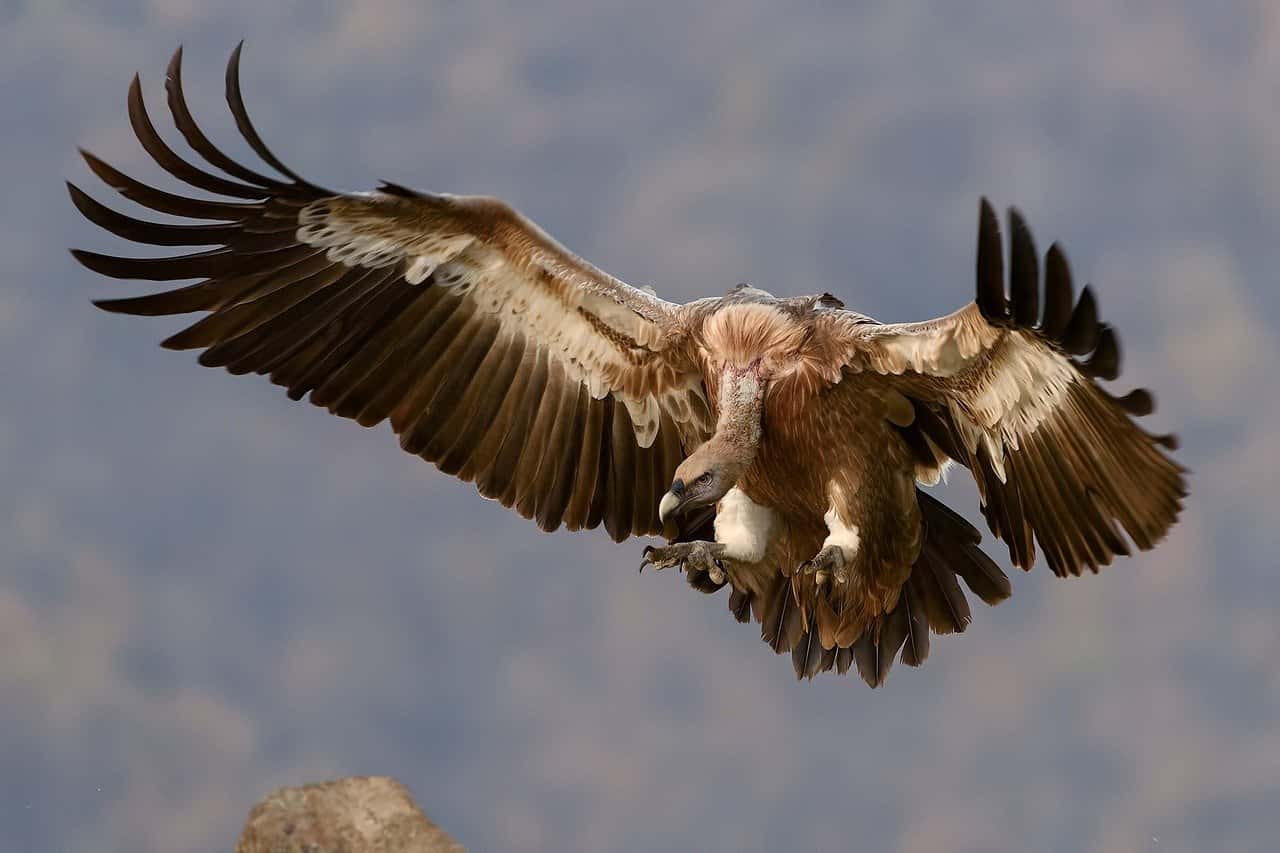 Chinua Achebe’s ‘Vultures’ is a gritty poem that is hard to read due to the harrowing subject matter. By using several visual and olfactory imagery, Achebe creates a dark and filthy environment in the poem. It depicts a truthful picture of the Belsen concentration camp. The commandant, in the poem, is none other than a representative of a class, who selflessly thinks of his own family even if thousands of families are rotting just around him. The fetid smell of rotting humanity inside him gets featured through the imagery of the vultures.

‘Vultures’ by Chinua Achebe describes the vultures in such a disparaging and grim fashion that could be construed as a metaphor for the people responsible for the atrocities in Belsen and in particular the “Commandant”.

The first stanza is the longest part of the poem and it is not a coincidence. It is a metaphor for the commandant’s predominant personality traits and this is why it dominates so much of the poem’s content. In the third stanza, the scene with his child represents a far smaller portion of the poem and this is a metaphor for his spark of humanity. The form of this piece is very clever as it creates a grim image, creates a glimmer of hope in the second and third stanzas, and then ends on a dour note emphasizing the futility of the situation.

The poem is written in four stanzas, in free verse with no rhyming pattern. There a few instances where the poet uses slant rhyme and perfect rhyming as well. Achebe mostly uses alliteration and consonance for creating internal rhymings. It contains lots of enjambed lines giving the poem a fast pace, but with a jarring rhythm that mirrors the dark tone of the poem. The first stanza is considerably larger than the other three taking up twenty-one lines that are all very short. The other three stanzas are eight, eleven, and eleven lines long respectively.

and drizzle of one despondent

in easy range of cold

This first stanza of ‘Vultures’ begins with a relentlessly long sentence filled with dark, sullen descriptions. Achebe uses alliteration in the second and third lines: “and drizzle of one despondent/ dawn unstirred by harbingers.” But this is an enjambed line and so doesn’t give the ebb and flow usually associated with alliteration. This helps to emphasize the bleak tone Achebe is trying to achieve.

He uses the description of the vulture’s seating position “perching high on broken/ bones of a dead tree.” It is unclear whether he is describing the tree as being bone-like or if the vulture is actually perched upon a mound of bones.

Achebe then continues to describe the birds themselves and paints a grim image of them, having already described them as harbingers, a word closely associated with the bringing of death; he describes them as having “bashed-in head” and “gross feathers” and later in the final line. He describes them as having “cold telescopic eyes” giving the birds an almost mechanical feel. It suggests they shouldn’t even really be classed as a bird.

He then continues to describe their actions, again this is very grim as they peck at the eye of a corpse. And he further describes the vultures eating the corpse’s bowel. We hope you’re not reading this whilst eating!

indeed how love in other

even fall asleep – her face

turned to the wall!

In this stanza, Achebe skillfully contrasts the “light” of love with the “dark” of death by mentioning that in this darkest of environments, the “charnel-house,”  a storage place for corpses, there is the presence of love. He personifies love itself.

Achebe uses an exclamation point on the phrase “her face turned to the wall” because love can’t stand to look at the atrocities contained within. It may also be a reference to people being lined up against walls before being gunned down by firing squads, but that’s purely speculative.

…Thus the Commandant at Belsen

the day with fumes of

waiting at home for Daddy’s

The third stanza throws the poem ‘Vultures’ on its head somewhat. It cleverly constructs the character of the “Commandant at Belsen”. His description is not particularly flattering. The commandant’s only physical description includes his “hairy nostrils” but his actions are kind and very human. He brings chocolate home for his child. A kind gesture and not actions one would probably associate with a war criminal.

Achebe makes readers see that even this horrible man has a soft side and that is represented by the description of his interactions with his child. It is almost as if his child represents his “good side” and the “vultures” represent his “bad side”.

Achebe also produces the harrowing image of the smell produced at Belsen Camp. The smell that lingers on the commandant himself being described as “human roast” considering the man smelling this way. Then he hugs his “tender offspring”. This is a very powerful piece of imagery.

providence if you will

that grants even an ogre

In the final stanza, Achebe brings the poem to a close, by describing how even the “ogre” that is the commandant has a soft side, which was shown in the preceding stanza. He emphasizes the solace that should be taken in this small mercy “praise bounteous providence”. His language here is particularly emphatic and evokes fantastic contrasts.

He describes the commandant’s humanity as a “tiny glow worm” which is encapsulated in a “cruel, icy cavern”. Even the word encapsulated isn’t accidental, suggesting that his warmth is trapped. It gives a picture of an evil man that would be rid of that warmth if possible.

This is further emphasized by the lines “the very germ/ of that kindred love.” This is not the voice of the narrator but rather a peek into the psyche of the commandant, showing the narrator’s omniscience. It is chilling to think that the commandant views his softer side as a curse, or a “germ”. Achebe closes this stanza by using the phrase “perpetuity of evil” suggesting that evilness is enduring, everlasting. This leaves the poem on a very bleak note.

Chinua Achebe was a contemporary Nigerian poet who spent part of his life living in his native Africa and part of it in the United States. He was a highly educated man who is one of Africa’s most famous writers producing not just poetry but novels as well. Achebe dabbled in politics, but left that endeavor behind, allegedly due to frustration with corruption. Chinua Achebe’s poems dealt largely with his own culture, but one of his more famous pieces of poetry was this piece, about Belsen, although even this was tied to his own culture using the imagery of vultures.

What is the message of ‘Vultures’?

The message of this piece is hinted at in the last stanza. Through this poem, Achebe tells readers that even in the cold caverns of someone’s cruel heart, love can exist. This love is compared to a “germ” that not only affects the loved ones but also others around a person, from humanity’s perspective.

What type of poem is ‘Vultures’?

Achebe’s ‘Vultures’ is in free-verse. It is not written in any conventional form. The poem consists of four uneven stanzas and the short lines make it fast-paced.

What does “Praise bounteous providence” mean?

The phrase “Praise bounteous providence” refers to the act of praising all the good things that the creator has given to humankind.

What is the meaning of ‘Vultures’?

The title of the poem contains a metaphor. Through the title, Achebe implicitly compares the commandants at Belsen Camp to vultures, for their cruelty and cold-blooded nature.

What was Belsen Camp? Why is it mentioned in the poem?

You can also read about these haunting holocaust poems and moving death poems.