Claude McKay was born in Clarendon Parish, Jamaica in September of 1889. McKay’s parents, Thomas Francis McKay and Hannah Ann Elizabeth Edwards were farmers and Baptists who were successful enough to qualify for the right to vote. They were also of Malagasy (from Madagascar) and Ashanti heritage, a fact which McKay would incorporate into his works. McKay had a complicated relationship with his parents but was proud of the ancestors from whom he descended.

As a boy McKay was educated at Mt. Zion Church, he then went on to live with his older brother. It was here that he 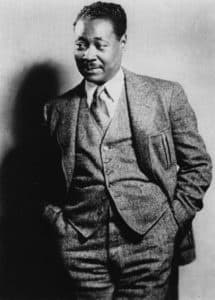 was educated in literature, philosophy, science, and theology. By the age of ten, he had started writing poetry. For a time the young McKay became an apprentice to a cabinet-maker. He would eventually meet a man, Walter Jekyll, who encouraged him to focus on writing in his native dialect.

McKay’s first book of poetry, Songs of Jamaica, was published in 1912. These were the first works ever published in Jamaican Patois, a dialect of English words spoken in an African structure. His second volume, Constab Ballads, followed that same year. This work focused on the time he spent in the constabulary in 1911.

It was around this same period that McKay traveled to the U.S. and attended Tuskegee Institute. He encountered a shocking amount of racism while there, seen through the people of South Carolina and their segregated facilities. In 1914, McKay moved to New York City and married Eulalie Lewars. A few years later he would publish two poems under a pseudonym, Eli Edwards.

In the late 1910s, he worked as the editor of The Liberator. It was in this publication that he published his most famous poem, ‘If We Must Die.’ It was included alongside, ‘Red Summer.’ These works were set against a period of racial violence against black people throughout white societies.

It was in 1919 that McKay moved to London and began promoting his beliefs of militant atheism. He joined the Rationalist Press Association and depend on his ties to communism. He was an avid reader of Marx and a member of the International Socialist Club. He became close friends with a number of other well-known members. McKay was then invited to write for the Worker’s Dreadnought. It was in this publication that McKay wrote a notable reaction to a racist article that had been included in the Daily Herald, which had insinuated black people as being subject to a hyper-sexuality.  In 1920 he published Spring in New Hampshire and Other Poems.

Due to his continued association with The Worker’s Dreadnaught, and his eventual position as a paid writer for the publication, he is considered to be one of, if not the first black journalist in Britain. In November of 1922, McKay traveled to Russia where he took part in the Fourth Congress of the Communist International in Petrograd and Moscow. It was in this same year that he published one of his better-known volumes, Harlem Shadows. This work included pieces from previous publications and volumes, including ‘If We Must Die.’ It was repackaged, signed, and sold to help fund his travels. McKay was very welcome in Russia and claimed to have been treated like a “rock-star.”

It was through Harlem Shadows, that his position as a leading member of the Harlem Renaissance was solidified. He had become associated with the Universal Negro Improvement Association and began writing for Negro World.

It was during his later travels in Paris that he fell ill. His inability to work for any period of time forced him to take on work as an artist’s model. The respiratory infection which he had contracted worsened, and he was admitted to a hospital. This brief respite from travel and writing did not last long and he was soon touring around Europe and parts of Northern Africa.

It was during this period that he published three novels, as well as a collection of short stories. The first novel, Home to Harlem, is regarded as one of his best-known works. It was published in 1928 and tells the story of a black soldier who abandons the military and returns to life in Harlem. This work was followed in 1929 by Banjo. It portrayed the treatment of sub-Saharan African people by the French. The third and final novel, Banana Bottom, dealt with themes of cultural identity.

The short story collection, Gingertown, was published in 1932. It was followed by A Long Way from Home and My Green Hills of Jamaica (published posthumously). These were autobiographical works. A collection of his poetry was published after his death titled, Selected Poems.

McKay died in 1948 of heart failure after embracing Catholicism and seeing a fall in his reputation.