Conrad Aiken was born in August of 1889 to a wealthy, New England family. His life began with tragedy when he was orphaned in 1901.

Conrad Aiken was born in August of 1889 to a wealthy, New England family. His parents, William Ford and Anna Aiken moved to Georgia where his father worked as 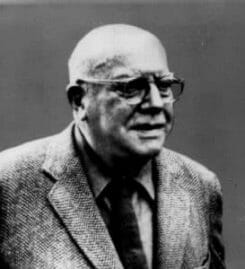 a brain surgeon. Over the following months, his father became prone to bursts of uncontrollable anger and in 1901 he murdered Anna, Conrad’s mother, and then committed suicide. Aiken would later write that he was present at the time, heard the gunshots, and discovered the bodies. The story of his parents would be told in his autobiography, Ushant, which was published in 1952.

After the death of his parents, Conrad was sent to live with his great aunt. While living in her household in Massachusetts, Aiken attended private schools, including Middlesex School, and Harvard University. It was at Harvard that Aiken met his lifelong friend, T.S. Eliot.

Aiken’s work was deeply influenced by both T.S. Eliot and Aiken’s own mentor, George Santayana. Santayana’s philosophical and musical approach to poetry changed how Aiken wrote.  In the early 1910s, Aiken married Jessie McDonald. During this time period Aiken wrote his widely popular short story, “Silent Snow, Secret Snow,” a collection of verse titled, Earth Triumphant, and a number of other works. One piece, “The Music I Heard,” was later set to music by a variety of different composers. Aiken continued to experiment with form, often attempting to reconcile song and poetry. Aiken’s first of fifty books which he was either to write or edit, was published in 1914.

Conrad and Jessie moved to Sussex, England in 1921 where, for a time, they raised their two children, John and Jane. Their third child, Joan, heralded the end of their marriage and they separated in 1929.

In 1930, Aiken won the Pulitzer Prize for Poetry for his volume, Selected Poems, and also remarried. This marriage would last for only a brief time before he remarried again in 1937. His career continued to progress and he was named Poet Laureate of the United States in 1950. During this time in his life, he was living in the Capitol Hill neighborhood and he was publishing his autobiography, Ushant.

Aiken died in August of 1973 in Savannah, Georgia. Throughout this life, Aiken received a number of awards for his work, including a National Book Award, The National Medal for Literature, and a Guggenheim fellowship, but today his name is relatively unknown.

A foreword is a brief piece of writing that appears at the beginning of a book or a longer short story, that is usually written by someone other than the author.
Full Description | Glossary