The Usual Suspect by David Harsent

‘The Usual Suspect’ is a mysterious and riddle-like poem that asks the reader to consider who they are and which parts of themselves they try to hide. Despite its brevity, each line of the poem is impactful. Harsent uses memorable, evocative images in order to create scenes of fear and suspense. 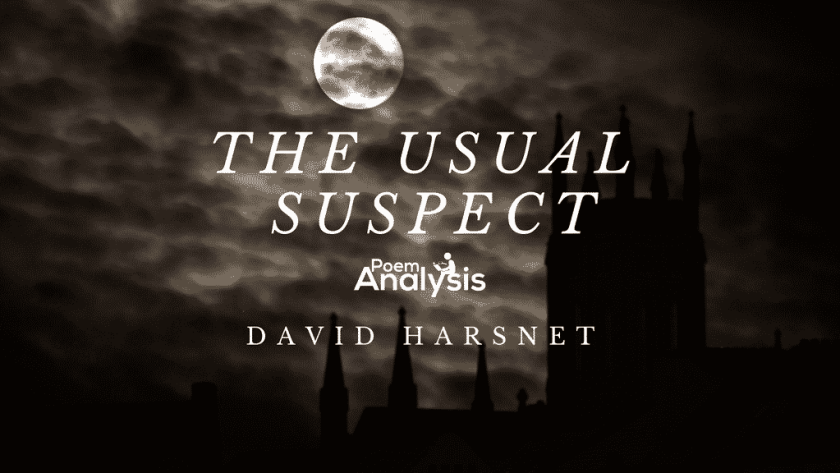 Summary of The Usual Suspect

‘The Usual Suspect’ by David Harsent is a dark and clever poem that speaks on the nature of one’s hidden “self”.

In the five stanzas of ‘The Usual Suspect,’ the speaker declares themselves to be a “spectre,” “figure” and “demon”. They are inhuman, deeply strange, and haunting. No matter what one does or where they go this speaker is going to be there. Their constant haunting feels personal and even obsessive. At the end of the poem, the speaker reveals that they are “you,” not some imp or gremlin.

Themes in The Usual Suspect

Throughout ‘The Usual Suspects’ David Harsent engages with themes that include fear and the self. The reader is asked from the first line of this poem to try to figure out who the speaker is. As the poet lays out this speaker’s nature, it becomes clear that they are an integral part of “your” life. They’re there no matter where you are or what you do to try to get rid of them. By using fear-laden imagery, the speaker is able to grab the reader’s attention to painting themselves in a horrifying, powerful light. This adds to the inescapable nature of one’s inner, truest self.

Structure of The Usual Suspect

‘The Usual Suspect’ by David Harsent is a five stanza poem that is separated out into sets of four lines, known as quatrains. These quatrains follow a simple rhyme scheme of ABCB, changing end sounds from stanza to stanza. This steady, perfectly rhymed pattern lends this darkly atmospheric poem an even more unsettling mood.

In regards to the rhythm, there is no single metrical pattern used evenly throughout ‘The Usual Suspect’. But, generally the second and fourth lines, the ones that rhyme, are shorter than the first and third.

Literary Devices in The Usual Suspect

Throughout ‘The Usual Suspect’ Harsent makes use of several literary devices. These include but are not limited to anaphora, enjambment, caesura, and imagery. The latter is one of the most important techniques at work in the poem. Without one’s ability to imagine what’s described in the poem, or what isn’t described, it would lose much of its impact. Since it takes the entire first four stanzas and most of the fifth to find out who “I” is, the reader’s imaginations will certainly be working in overtime to fill in the gap.

Anaphora is a kind of repetition that is seen through the use and reuse of a word or set of words at the beginning of multiple lines. In the case of Harsent’s poem, “I” or “I’m” start ten of the lines. This helps establish an expected rhythm. Readers should also take note of how enjambment impacts the rhyme. For example, the suspenseful transition between lines three and four of the first stanza and that which exists between lines three and four of the third stanza. There are surprises and fears around every corner.

Analysis of The Usual Suspect

I’m the demon of the stair,

I can smell your fear.

In the first stanza of ‘The Usual Suspect,’ the speaker begins by making a series of statements about his or herself. This speaker, who remains nameless and genderless until the last line of the poem is quite chilling. They declare themselves to be the “demon on the stair” who is always waiting for “you”.

One of the ways that Harsent creates an engaging atmosphere in this poem is by addressing the text to “you”. There is no specific listener in mind. Instead, he is talking to every listener. His speaker goes on to say that they can smell “your fear” and therefor track you wherever you go. These are two terrifying opening lines. By this point, the reader’s imagination should be working in overtime trying to figure out who this person/creature/entity is.

It is also important to take note of the suspenseful pause between the third line and the fourth line. Readers have to jump down to the following line (an example of enjambment) in order to find out what happens next.

I’m the ghoul beneath the bed

But never when you peek.

The second stanza of ‘The Usual Suspect’ starts out with several more statements about this mysterious speaker. First, they say that they are the “ghoul beneath the bed”. This is a horror trope, very similar to the “demon of the stair”. They reside in the places that might terrify you most, playing into deep-set fears from one’s youth. There is in fact, this speaker is saying, something to be scared of under the bed.

There is an important caesural pause in the third line of this stanza when the speaker declares that they are “always here” in their home. By this point, the poem is taking on the qualities of a riddle. Each of these lines is like another clue, leading to a clever answer.

I’m the figure in the fame,

Although I never spoke.

There are two good examples of alliteration in the third stanza of ‘The Usual Suspect’. The first is “figure” and “fame” in line one and the second is “spectre” and “smoke” in line two. These lines help to create the feeling that the speaker is always there, looking on mysteriously. By calling themselves a demon, a spectre and a ‘figure” they are creating the impression that they are less than solid. There is something ephemeral or otherworldly about this speaker.

There is also a good metaphor in the third and fourth lines. The speaker says that their voice is the “Wind in the chimney” even though they “never spoke”. This just adds to the mystery.

I’m the monster in the cupboard,

I think of you the more.

In the fourth stanza of ‘The Usual Suspect,’ the speaker says that they are another creature, a monster. They are the one in the “cupboard” waiting to jump out and scare “you”. There is nothing that “you” can do to get rid of this speaker. In fact, the less you try to engage with them, the more they are there.

In the fifth and final stanza of ‘The Usual Suspect,’ the speaker says that after all these lines it might seem like they are “gremlin, imp, or eld” or some other mystical creature. But, that’s not the case. After a very suspenseful pause, the speaker says that they are “of course—yourself”. This twist ending forces the reader to reassess everything that the speaker has said so far.

In fact, it’s important to read this poem more than once in order to really understand what the speaker is saying. There are parts of “you” that go unacknowledge, perhaps something that “you” would like to forget. How “you” applies is going to vary depending on the perspective that the reader brings. But, it is safe to say that the poet was interested in defining something akin to guilt and discuss the attempted, but failed, suppression of certain features, or even one’s true self.

The dear that’s at the heart of this poem is one of its most important elements. There are numerous other poems that create a similarly haunting and strange atmosphere. For example, ‘The Witch’ by Mary Elizabeth Coleridge or another poem that addresses the mind and perceptions of self, ‘I felt a funeral, in my brain’ by Emily Dickinson. Readers might also be interested in ‘The Haunted Palace’ by Edgar Allan Poe and ‘Omens’ by Cecilia Llompart.