Within ‘Revolving Days’ Malouf explores themes of relationships, the past, and memory. His speaker addresses his ex-lover, expressing his lasting emotions and depicting the revolving days of his life and role as “lover”. The mood is resigned and contemplative as he considers who he was, who he is, and the person his ex-lover is now. 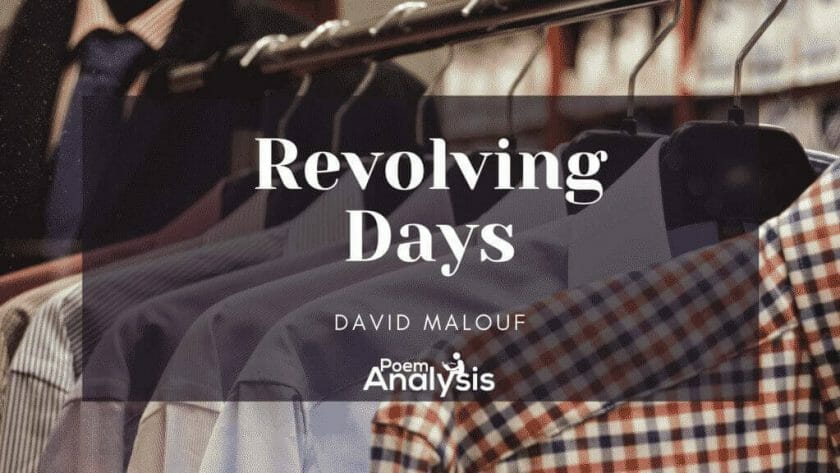 In ‘Revolving Days’ by David Malouf, the speaker takes a look at his past relationship and the evolution of his role as “lover”.

In the first part of this poem, the speaker remembers when he fell in love, how it was a “mistake,” but that it’s also been long-lasting. As the poem progresses, it becomes clear that the speaker and this person he loves are no longer together. But, despite the things that have changed, he has remained the same. He still loves the person to whom he’s been speaking.

In ‘Revolving Days’ Malouf engages with themes that include love, memory, and transformation (or lack thereof). The speaker spends the bulk of this poem describing a love he used to have and the way that that love changed him. But since, he hasn’t changed at all. He’s still the person he sued to be when he was with his ex-lover, for better or for worse. But, he knows that she has changed. She’s somewhere else, (where exactly he doesn’t know) and he figures that she’s moved on to be with someone else. His memories of the past are quite strong, so much so that he’s able to depict moments form his love affair with clarity and poignant (if someone reserved) emotion.

Structure and Form of Revolving Day

‘Revolving Days’ by David Malouf is a three-stanza poem that’s divided into uneven sets of lines. The first stanza contains ten, the second: seven, and the third: six. Malouf did not give this poem a specific rhyme scheme or metrical pattern. Rather, the lines vary in the number of syllables and the number of words.

Although there is not a structured rhyme scheme there are moments of rhyme within the poem. These are seen through repetition such as with “lasted” and “lasted” in line two of the first stanza, as well as through half-rhyme. Also known as slant or partial rhyme, half-rhyme is seen through the repetition of assonance or consonance. This means that either a vowel or consonant sound is reused within one line or multiple lines of verse. For example, “green” and “League” in lines eight and nine of the first stanza. Or, another example, “seeing” and “be” in six and seven of the same stanza.

Malouf makes use of several poetic techniques in ‘Revolving Days’. These include alliteration, anaphora, enjambment, and caesura. The latter, caesura, occurs when a line is split in half, sometimes with punctuation, sometimes not. The use of punctuation in these moments creates a very intentional pause in the text.

A reader should consider how the pause influences the rhythm of one’s reading and how it might proceed an important turn or transition in the text. For instance, line one of the third stanza. It reads: “Revolving days. My heart”. Or, as a mother example, a reader can look to line three of the second stanza which reads: “steps into the room. In the next room you”.

Alliteration occurs when words are used in succession, or at least appear close together, and begin with the same letter. For example, “life as lover” in line eight of the first stanza and “writing” and “wherever” in line two of stanza three.

Malouf also makes use of anaphora, or the repetition of a word or phrase at the beginning of multiple lines, usually in succession. This technique is often used to create emphasis. A list of phrases, items, or actions may be created through its implementation.

Another important technique commonly used in poetry is enjambment. It occurs when a line is cut off before its natural stopping point. Enjambment forces a reader down to the next line, and the next, quickly. One has to move forward in order to comfortably resolve a phrase or sentence.

In the first stanza of ‘Revolving Days,’ the speaker looks back on his life and remembers the year that he “fell in love”. He explains it simply, it happened because he had nowhere to go. This frivolous start dissolves as he adds that it “lasted and has lasted”.

The next lines use imagery as a way of painting a picture of the past, as well as evoking in the reader an emotional response to the speaker’s personal life. He recalls what it felt like to be falling in love. Specifically the “boom under the pocket of a shirt” urging him on and the “old tug at the heart”.

In an original depiction of a lover’s mind, he describes buying shirts and using them as a way to understand himself as “lover”. These ranged in color and one was his “first button-down collar”.

As the poem progresses it becomes clear that the love the speaker experienced is a little more complicated than it seemed. It “lasted” but not in the way one might immediately expect. He looks to the past, while also considering the future, in this stanza.

The past comes back to greet him while he’s in the bathroom looking in the mirror and he recalls the time they spent together and the promises they made. These have fallen to the wayside as has the relationship.

In the final stanza of ‘Revolving Days,’ the speaker makes use of the phrase “Revolving days” to depict the nature of his heart and memory. He is writing “this for” his ex-lover. They are no longer together. In fact, he doesn’t know where they are. They could be with someone new. Despite the changes that have happened he’s the same.

Before the intended listener/the speaker’s ex-lover starts to worry, he says he’s not going to pop up form the past “to discomfort” them. They are at a distance and he knows there is very little chance he’ll be getting a reply to this letter in poem form.

Malouf’s original love poem is a pleasure to read. There are many other poems that take love and look at it from a slightly different point of view or use unusual imagery (such as that of buying different colored shirts) to depict it. Readers might be interested in ‘Love is Not All’ by Edna St. Vincent Millay, ‘I Carry Your Heart With Me (I carry it in)’ by e.e. cummings, ‘Valentine’ by Carol Ann Duffy, and ‘Love’ by Billy Collins.