‘Iris’, a heart-touching poem about death and love, appears in the American poet David St. John’s collection Study For The World’s Body. This poem is dedicated to the poet’s grandmother Vivian St. John. 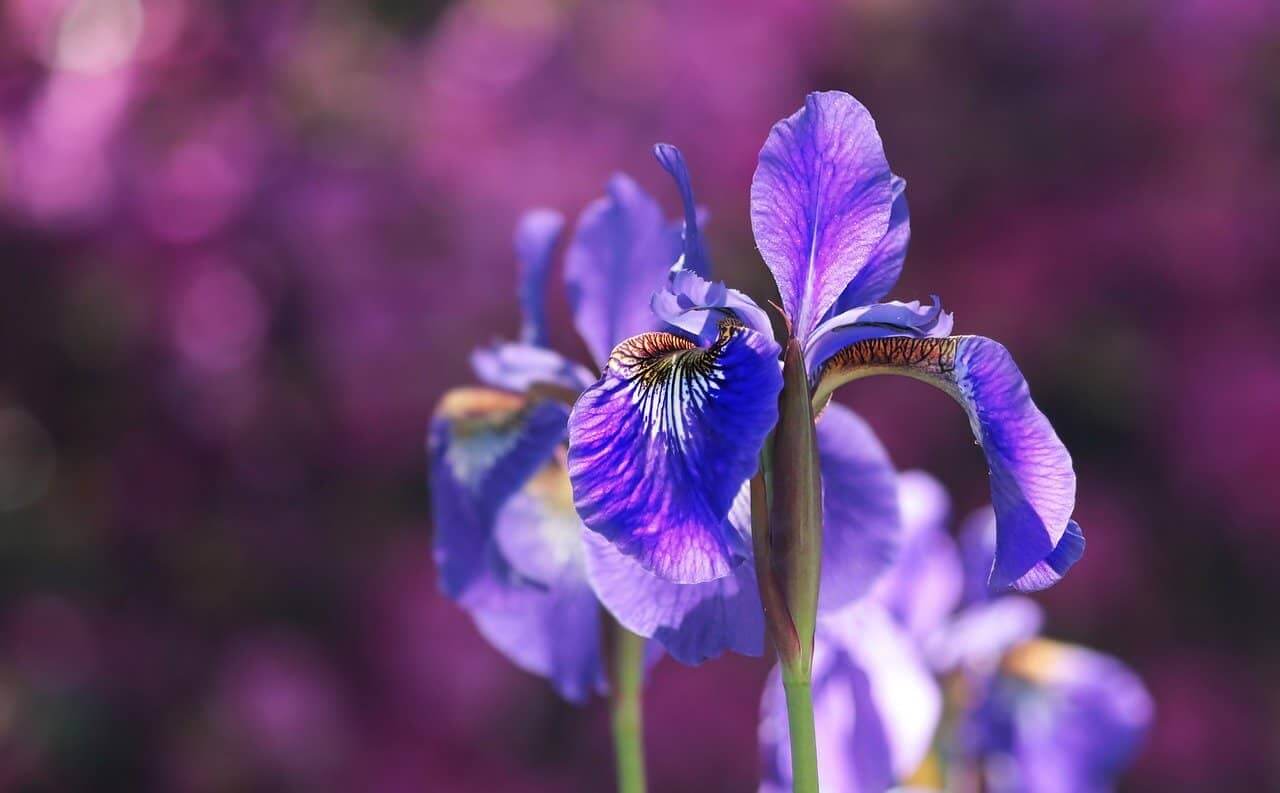 ‘Iris’, a poem by modern American poet David St. John is about a speaker’s thoughtful reminiscence of the things past, death, and the relationship between him and his grandmother. The flower mentioned in the text is a medium to reach the uncertain levels of depth where none can visit. One can only look from a distance and think with wet eyes, how short a man’s life can be. The “iris”, often portrayed as a symbol of life and pride, is depicted as a sign of death, and coldness in this poem.

‘Iris’ by David St. John is about how a speaker finds a “train” inside an iris and where it leads him, down memory lane.

The poem begins with an exaggerated reference to an iris flower. According to the speaker, he finds a metaphorical “train” inside the flower. It consists of two passengers, one a grandmother and the other one is her grandson. The grandchild is the speaker of the poem. John writes this poem from his perspective. His speaker remembers the day when his grandmother left him by riding on the metaphorical train of life, leading one to death. After the incident, he broods over the iris flower and how it carries the old memories with his grandmother.

‘Iris’ is a free-verse lyric poem written in the form of an elegy. It is a lamentation on the death of the speaker’s grandmother. However, there are no such formal characteristics of an elegiac poem. Reading the text closely reveals the fact that this piece is indeed a heartbroken speaker’s recapitulations about his deceased grandmother. The text consists of a number of couplets that are separated by the use of codas, one-line stanzas. There is no specific rhyme or meter. However, readers can find the use of occasional internal rhyming between the lines.

John makes use of the following literary devices in ‘Iris’.

There is a train inside this iris:

Back off her forehead, onto her cold and bruised shoulders.

David St. John’s poem ‘Iris’ is dedicated to Vivian St. John who died in 1974. It is an elegy written for a speaker’s deceased grandmother. The narrator of the poem remembers the day when his grandmother left him. In the first few lines, the speaker describes how he finds a “train” inside an iris flower. He converses directly with the readers and convincingly tells them that what he is saying is true.

One has to imagine the sepals folding outwards the flower as a train that leads the speaker down memory lane. In this way, the flower becomes a medium to travel to his past. He tells readers not to think that he is exaggerating. By using the repetition of the phrase “A train inside the iris” he emphasizes it.

In the following lines, he beautifully describes the flower. According to him, the petals resemble a child’s finger that is bearded with tiny, black banners. He can see a small window inside the flower that probably resembles the porthole of the train.

The train, leading him to his memories with his grandmother, is not well-lit. But, when his grandmother’s presence in it enlightens the compartment. Her white, angular face is still glowing in his mind. Beside her, a boy sits in the stuffy, hot compartment. He is none other than the speaker of the poem. From the following lines, it can be inferred that the old woman was near her impending death.

The prairies fail along Chicago. Past the five

In the next lines, John’s speaker digresses from the subject matter. He gives readers a glimpse of the prairies of Chicago, the five lakes, and the black woods of New York. The poet uses these images to portray the life of the old woman. Here, the “black woods” symbolizes death.

When the speaker bends over the iris again to look closely, he can see the train again. It drives deep into the stem, referred to as the “damp heart” of the plant. Here, the plant is used as a symbol of the speaker. Its “damp heart” is a hint at his sad heart.

As he walks through the garden where he can find the irises, the gravel of the garden crunches beneath his feet. The use of auditory imagery is significant as it resonates with the emotional state of the speaker. John compares the harshness of death to the crunching sound of the gravel.

He walks on the path shaded by elms. The trees are arched like a French railways pier. This image takes the speaker again to the past. He finds himself standing in a railway station waving the last goodbye to his grandmother. The boy holds a fresh iris in his hand and gazes at it.

Into the flower, as if he were looking some great

In the following lines, the boy is found to be in deep introspection. He looks into the flower as if he is looking at his grandmother from a vast distance. Suddenly, he realizes that death is walking toward him with its dull shears. The personified death will cut the flower, representing life, from its stem. Here, the “iris” stands as a symbol of the speaker’s grandmother.

In this way, the metaphorical train finally left the station with his grandmother. However, nature remains in the same state. Humans are prone to death and decay, unlike the regenerating nature.

According to the poet, the iris still curls on its stalk and the elms are there in the garden. The “icy and bitter fragrance” of the flower reminds him of his grandmother. Her death left him with this cold fragrance of loneliness.

David St. John’s poem ‘Iris’ appears in his poetry collection Study For The World’s Body: New and Selected Poems. It was published in 1994. This poem is a postmodern lyric poem. It is dedicated to the poet’s grandmother Vivian St. John. She died in 1974 when the poet was 25 years old. In this piece, the poet shares how he feels without his grandmother. The iris in his garden reminds him of his grandmother. He can look through the flower and find her face in it. The more he looks at it the more he feels lonely. Its cold and bitter fragrance fills his heart with utter sorrow that cannot be expressed in words.

What is the poem ‘Iris’ about?

David St. John’s ‘Iris’ is about the death of his grandmother. This piece is dedicated to her. In the text, he expresses his deep sorrow by using the metaphor of a “train” which takes him down memory lane. He can feel the pain he realized on that day when his grandmother permanently left him.

What is the significance of iris in the poem?

David uses the “iris” as a symbol of death, coldness, and bitterness. Unlike the conventional symbolic significance of the flower, this poem explores the iris as a means to return to the past. It is associated with the poet’s deep emotions. The flower keeps him reminding of the death of his grandmother.

Who is the speaker of ‘Iris’?

The speaker of the poem is none other than the poet David St. John himself. He writes this poem from the point of view of a first-person speaker. His poetic persona speaks about the death of his grandmother in an implicit manner.

What type of poem is ‘Iris’?

It is a free-verse lyric poem that does not have a regular rhyme scheme or metrical pattern. There are a number of couplets separated by one-line stanzas. The overall poem is written closely resembling the scheme of stream-of-consciousness technique.

What is the theme of ‘Iris’?

This poem taps on the themes of death, depression, memory, and love. The main idea of this poem revolves around the speaker’s loneliness after the death of his grandmother. He portrays how an iris reminds him of the day when his grandmother left him, riding the last train of life. This metaphorical “train” led her to death.

You can also read about these incredible poems about death and the best-loved poems about flowers.