Daya Dissanayake was born in Galle, Sri Lanka in March of 1947. His full name is Dayananda Dissanayake and he is one of five siblings born to parents Albert Dissanayake and Agnus Wavala Panditha. When he was fourteen years old Dissanayake’s father died. From that point on he was raised by his mother and uncle. His mother supported the family through weaving. 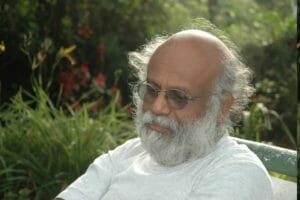 As a young man, Dissanayake attended Southland Balika Vidyalaya and then went on to continue his education at St. Aloysius College. While Dissanayake was in school he contributed to magazines and often wrote articles for the Sinhala paper known by the name, Ada. It was not poetry that first drew Dissanayake to the arts, instead, he spent a great deal of time as a photographer, winning awards and competitions while he was in his twenties. The only writing he engaged in during his youth were a few efforts at short fiction. These works are now mostly lost.

After graduating from college he went on to become a teacher of science at Sacred Heart Convent, Galle. It was at this institution that he met his future wife, Indrani Pathirana. In the mid-80s the couple had two children and were living in Colombo. Dissanayake began work at the Head Office of the Cement Corporation and his wife found work at the Curriculum Development Center. They live in the city to this day.

It was in his forties that Dissanayake began to write seriously. He often wrote on topics of history and Buddhism. His first novel was published in 1998 and was titled, Kat bitha. It was followed by The Saadhu Testament that same year. It was also in 1998 that Dissanayake won the State Literary Award for the Best English Novel. He was celebrated as the first Asian writer to be published in an electronic format.

In the early 2000s he wrote and published the works, The Bastard Goddess, in 2003, and Thirst in 2004. He has also published a collection of poems titled, Inequality. It was noted for its experimental style and interesting use of language. In 2007, he again won the State Literary Award for the Best English Novel. In 2013, he received the SAARC Literary Award distributed by the Foundation of SAARC Writers and Literature.