Absences by Donald Justice explores memory, and the inability to stay in a moment forever. Eventually, everything becomes the past. Justice focuses on the strange nature of memories, exploring childhood through a mournful and introspective poem. The poet uses an extended metaphor of snow covering a field of flowers to represent the process of forgetting. 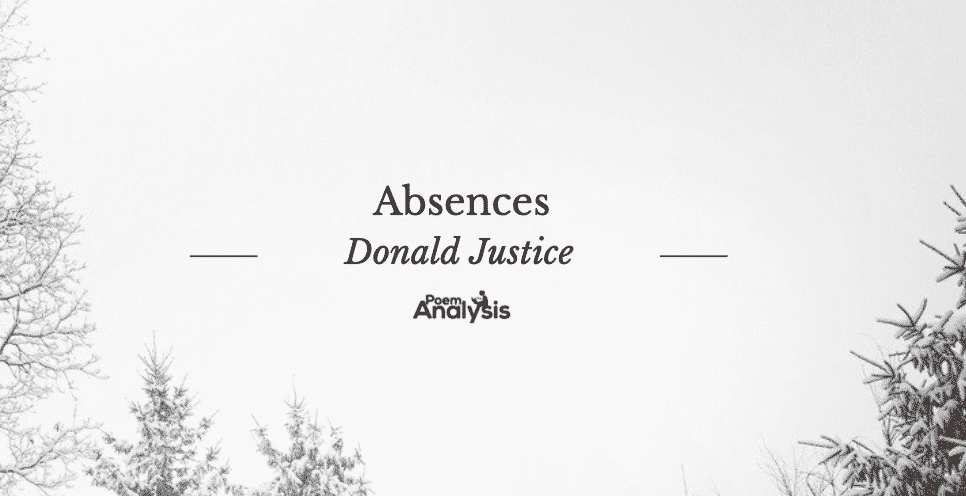 Absences by Donald Justice begins by focusing on the setting of the poem, the falling snow and lack of flowers being the two main descriptors. Justice relates the falling snowflakes to someone playing individual keys on a piano, the soft sound suggested coupling with the drifting snow to create a beautiful, yet slightly little haunting, scene. Justice focuses on the ‘cereus’ plant, its ‘yellow-white’ flower also falling to the floor. The second stanza has a mournful note, with Justice suggesting that it seems everything is falling. The final stanza reflects on the music that comes from Justice’s memories, and how the empty landscape before him, too, becomes a distant memory.

Justice’s Absences is three stanzas long, each measuring 6, 3, and 5 lines respectively. There is no rhyme scheme in the poem, nor is there any consistent metrical form. Even in the lengths of stanzas there is disparity. The inconsistent, free verse, form that Justice employs reflects the nature of memory, fading in and out while Justice addresses it. The varying structure could also be seen as a reflection for the melancholic theme of the poem, the poet not finding consistency in any aspect of his life.

Absences begins by focusing on the weather, ‘snowing’ being the first idea we are introduced to within the poem. This scene building, with a falling blanket of snow, suggests the sublime silence of winter, with Justice focusing on creating a beautiful depiction of setting. The use of ‘afternoon’ furthers this initial suggestion, with the soft light of the day combining with the silent snowfall to create a sense of the harmony of nature.

Yet, Justice reveals that there are ‘no flowers’ in the landscape. Instantly, from this very first line, Justice is alerting the reader to things missing, Absences addressing the lacking quality of the present.

Instead of ‘flowers’, a symbol of spring and summer months, there ‘is only’ the ‘sound of falling, quiet and remote’. Although falling snow doesn’t create a sound, Justice uses this complete silence as the central sound of his poem, the looming silence of winter itself being a form of absence. It is oddly ‘quiet’, the poet himself finding the sound ‘remote’, even though it is right before him. The strange balance of silence within the poem is another case of absence. Even metrically, due to the caesura before ‘quiet’ and the end stop after ‘remote’, there is a break in the sound of the sentence, the gap in form reflecting the silence of the falling snow.

This sense of silence stemming from the punctuation of the poem is furthered after the image of ‘childhood piano’ is introduced, the hyphen creating a metric break in which silence flourishes. Simultaneously, the hyphen caesura emphasizes the idea of the piano, the black and white keys being a symbolic reflection of the falling snow on the earth.

The second stanza is much shorter than the first, measuring three lines instead of six. The metrical pace within this stanza reflects the first, being characterized by a slow pacing. Indeed, there is a caesura or end stop on every line, with the first ‘Now,’ being emphasized as the new stanza begins. Not only this, but the second line of this stanza contains an ellipsis, further reflecting the long silence of the falling snow. In a poem all about Absences, Justice employs punctuation that enforces metrical gaps, the punctuation literally reflecting the title or the poem.

After the ellipsis, the short line ‘so much has fallen’ acts as a moment of clarity within the poem. Justice is looking back over his life, all the ‘memories’ and how they relate to the current moment. The state of falling reflects Justice’s own loss, things in his life disappearing alike ‘poor-snow flowers’ fallen ‘in a heap’. By using natural imagery, Justice is giving the reader an insight into the mournful process of loss.

It is only within this third stanza that Justice shifts the narrative to focus on himself, employing the personal pronoun ‘I’ at the beginning of this stanza. He creates a picture of himself looking out over the landscape, listening ‘all afternoon’ for the slight sound of ‘a step’. This paragraph is an exploration on the creation of memories, and how they can intersect with the present moment.

Indeed, when Justice finally hears ‘a step’, it begins ‘already falling away, already in memory’, the moment he waited for now in the past. This shift from future to past, in the breadth of ‘a step’ is a difficult concept to envision. Justice is arguing that there are moments which you await for a long time, and as soon as they come, they are now in the past. Although you could have been waiting your whole life, or just ‘all afternoon’, eventually the moment will arise. As it arrives, it is instantly gone, ‘falling away’ into ‘memory.

Justice then employs the image of a ‘silent piano’, a symbol of memories of his ‘childhood’. By having the piano in the background, although ‘silent’, it creates a connection between the present and the past. This strange liminal space in which Justice is living being a form of absence in itself.

Justice finishes Absences by focusing on the moment in which a memory begins to fade away, an event ‘already in memory’ becoming further and further past. The constant falling of ‘snow’ is an exceptional metaphor for forgetting, as the constant layer of snow builds up, obscuring everything underneath. Where the flowers used to be, the snow has built up and covered them, making them ‘absent flowers’ – representing forgotten memories.

The final word of the poem, ‘abounding’, is the direct opposite to Absences, with Justice saying that the amount is has forgotten – indeed, the amount absent – is ‘abounding’, using the metaphor of flowers to represent memories.