In ‘Resumé’ Dorothy Parker explores themes of death/suicide as well as free choice and life. Each of these is tied up in the ability, or lack thereof, to end one’s life. The speaker has the ability, to an extent, to access each method she mentions but she chooses, for one reason or another, not to. In the end, staying alive is easier, even if painful. 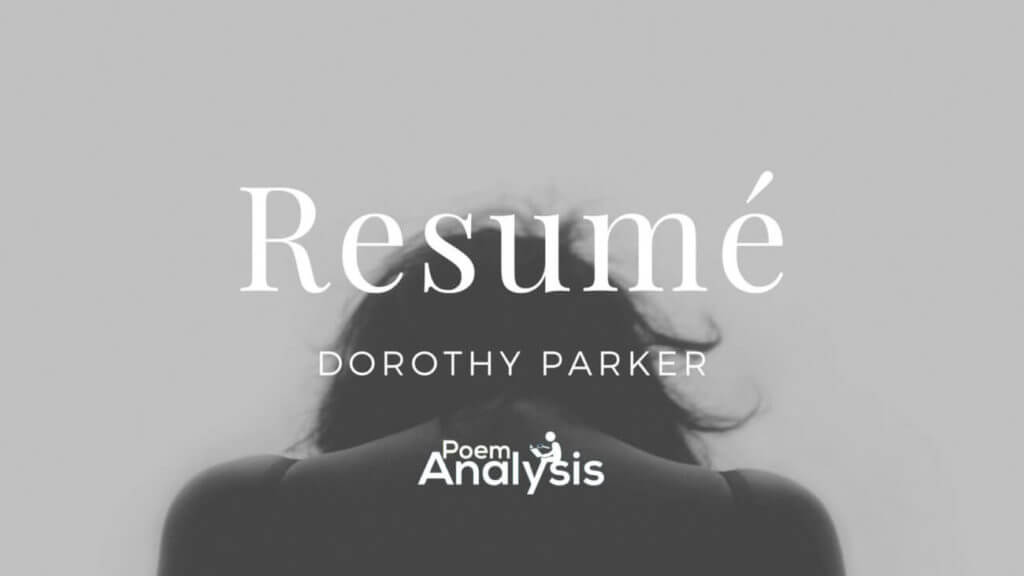 Throughout this short poem, the speaker takes the reader through seven different ways to kill oneself. From gas, to guns, and razors, each one of these is introduced and dismissed for very simple reasons. Rather than strive to end her life, the speaker is put off by the dampness of water and the smell of gas. This might lead one to conclude that she doesn’t in fact want to end her own life.

‘Resumé’ by Dorothy Parker is an eight-line poem that is contained within one stanza of text. The lines follow a rhyme scheme of ABAB CDCD and a regular metrical pattern of dimeter. The latter refers to the number of beats per line. In this case, there are two sets of two beats, for a total of four, per line.

Parker makes use of several literary devices in ‘Resumé’ these include but are not limited to alliteration, half-rhyme, and epistrophe. The latter, epistrophe, is the repetition of the same word, or a phrase, at the end of multiple lines or sentences. In this case, the poet uses “you” at the ends of lines one and three. These endings are known as exact rhymes. They also acknowledge for the reader that “you” are part of the narrative.

Alliteration occurs when words are used in succession, or at least appear close together, and begin with the same sound. For example, “River” and “Razors” in lines one and two as well as “Guns” and “Gas” in lines five and seven.

Half-rhyme, also known as slant or partial rhyme, is seen through the repetition of assonance or consonance. This means that either a vowel or consonant sound is reused within one line or multiple lines of verse. For example, “Nooses” and “You” in lines six and eight.

And drugs cause cramp.

In the first lines of ‘Resumé’, the speaker begins by introducing the first of several ways that she has considered killing herself. She speaks first about “Razors” as a possibility. But, she dismisses this particular method because it would be so painful. Without any background information about why she’s thinking about killing herself, she immediately transitions into the next and next possible methods of ending her life.

She contemplates the possibility of walking into a river and drowning herself in the second line. But, rivers are “damp,” therefore ruling them out. With this, a reader might start to consider whether or not the speaker does want to end her own life. The dampness of water should not be something that stops her if she is committed to this path. The use of the word ‘damp” is an interesting choice. It’s something that’s uncomfortable but certainly not debilitating. She is understating what the experiences would be like, as she foes in the next line.

When she considers swallowing acid she thinks about how it would “stain you” and rules it out. She does not mention the terrible pain that would go along with inflicting this substance on one’s body.

The last line mentions “drugs’ that “cause cramps”. She is thinking about stomach cramps specifically. This is yet again another simplified, small effect of the choice. It’s something that if she truly did decide to end her life would be passing.

The next ways she considers committing suicide progress much like the previous four. She thinks of one and then immediately rules it out. These include “Guns,” “Nooses,” and “Gas”. There is a reason attached to each method that keeps her from turning to it. None of these are very appealing to her and she ends up deciding instead that “You might as well live”.

The last line rounds the poem off in a sudden and declarative way, much like the way she dismissed all the previous ways of killing herself. Again, a reader should consider when reading this poem that the speaker does not actually want to kill herself and that each of, what could be called excuses, provide her with a reason not to turn to the various methods.

In the end, she decides to live not because she takes pleasure in it but because dying would be too much work, too painful, or simply too uncomfortable.