‘Good Timber’ is one of Douglas Malloch’s most popular poems. It focuses on subject matter and themes that are frequently a part of his work. He wrote about the woods, lumberjacks, and adventure stories. This imagery is all present in ‘Good Timber’. Throughout the poem, Malloch uses simple language, diction, and standard syntax in order to get his main points across. The poem is meant to be accessible to all readers. This makes a great deal of sense as the themes at the heart of the poem apply to all people, no matter who they are or where they’re from. 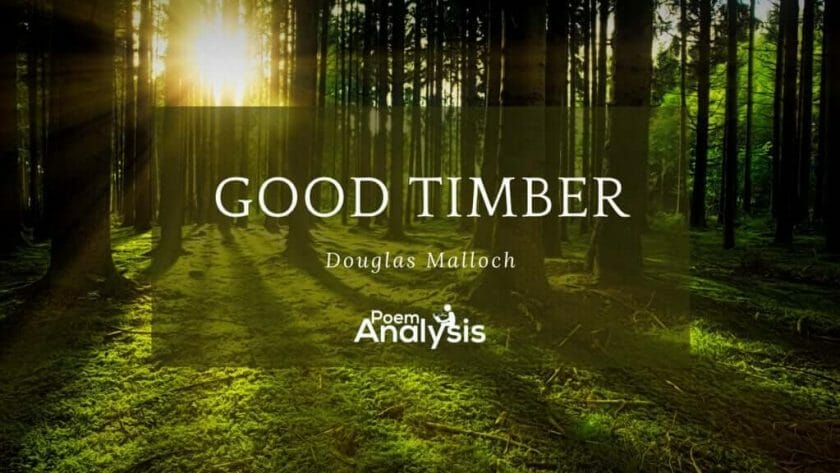 The poem begins with the speaker describing how there are two types of trees and men. First, there are those who are readily given everything they need to survive. This type of person or tree never has to worry about where their food and water is going to come from.

On the other hand, there are the trees and men who must fight, from birth, to survive. Their broken branches and scars are evidence of their ability to survive on and become “forest king[s].”

In ‘Good Timber’ Malloch explores themes of struggle, fulfillment, and nature. Those who live through “broken branches” and storms will become “Good timber.” This theme is common within Malloch’s work. He was often concerned with depicting different ways life can be lived and how the most fulfilling lives come to be. By using nature as the source of his imagery he is tapping into a source that all people are familiar with. The extended metaphor that lasts throughout this poem ensures that everyone understands what the strength is that he’s talking about. A fulfilling life can only come after one has worked hard. This is a roundabout way of saying that nothing worth having comes easy.

Structure and Form of Good Timber

‘Good Timber’ by Douglas Malloch is a four stanza poem that is separated into sets of six lines or sextets. It is one of Malloch’s most well-known pieces and follows a consistent and structured rhyme scheme. The lines conform to a pattern of aabbcc, alternating as the poet saw fit from stanza to stanza. This was a common structure for Malloch. His rhyming pairs carry a reader through the piece from beginning to end. The couplets give the poem a sing song-like sound, resembling a song lyric.

Throughout ‘Good Timber’ Malloch makes use of several literary devices. These include but are not limited to metaphors, alliteration, and enjambment. This entire poem is one extended metaphor comparing trees to human beings. The tree mentioned in the first stanza represents someone who has never had to fight for anything in their life. This man had more than enough “sun and sky and air and light.” Although this initially seems like a good thing, the speaker turns the text in a different direction.

These flourishing “trees” or coddled people do not live good, or even full, lives. They are often struck down and come to death as “scrubby things[s].” This type of person is contrasted with one who “does not grow with ease.” Their life might be rougher, but they are made of “Good timber.”

Alliteration is an interesting formal device that can be sen through the repetition of consonant sounds at the beginning of multiple words. For example, “broken branches” in stanza four and “storm” and “strength” in stanza three. Enjambment is also an important technique to take note of in ‘Good Timber’. Readers can look to the transitions between lines one and two of the first stanza and lines three and four of the second stanza for examples.

The tree that never had to fight

For sun and sky and air and light,

But stood out in the open plain

But lived and died a scrubby thing.

In the first stanza of this piece the speaker begins by describing one particular type of tree and the life it lived. It is clear from the first stanza that the tree is standing in for a human being. There is an extended metaphor that stretches the length of the poem through which Malloch uses trees to represent humans and they different lives they lead.

He speaks first on the “tree that never had to fight.” From just this line it is clear that he is looking down on this type of person. The “fight” already feels necessary. In the next lines he describes how the tree, or person, who lives an easy life does not worry about resources. They have all the food, water, air and light they need to survive. These needs don’t register for them. Additionally, due to their position, they “always” get enough rain.

The position of the tree speaks to the way that one’s lot in life is determined by their birth. One cannot choose the life they were born into. The tree did not have to fight for what it has. In the last two lines the speaker reveals the outcome of such a life. This kind of tree will never become a “forest king,” or one of the largest, strongest trees in the forest. It will live and die “a scrubby thing.” It may have a position, but that position did nothing to further its interior strength.

The man who never had to toil

To gain and farm his patch of soil,

Of sun and sky and light and air,

But lived and died as he began.

In the next six lines of ‘Good Timber,’ the speaker compares the tree to the man who never “became a manly man.” This person lived a similar life. He never had to “toil / To gain and farm his patch of soil.” Just like the tree was given all the elements of life it needed, so too was the man given his “share” without effort.

The last two lines solidify the comparison between the man and the tree. He “lived and died as he began” without development. His position, socially, morally and economically did not improve because he did not feel the need to reach beyond his readily available resources.

Good timber does not grow with ease,

The further sky, the greater length,

By sun and cold, by rain and snow,

The third stanza of ‘Good Timber,’ is dedicated to describing what does make “Good,” or strong, “timber.” A tree that is going to live a long and successful life “does not grow with ease.” It encounters throughout its days “stronger wind” and “further sky” than the “scrubby” tree ever did. It also lives through more storms and an uncertain amount of sun, cold and “rain and snow.”

The final line joins together the tree of good timber with the “manly man.” The same forces forged both types of life.

Where thickest lies the forest growth

We find the patriarchs of both.

And they hold counsel with the stars

Whose broken branches show the scars

Of many winds and much of strife.

This is the common law of life.

In the last six lines of ‘Good Timber,’ the speaker goes on to describe the environment of the man and the good timber tree. Both are in the “thickest” part of the forest. This contrasts with the tree of the first stanza. It grew in an opening in the forest canopy. The men and trees are in the shade and far from the sun.

They are both the “patriarchs” or male leaders of their species. From where they are situated, away from the light of the sun and city, they are able to “hold counsel with the stars.” They tap into a deeper knowledge, and commune with forces that others cannot understand.

The tree and the man share “broken branches” and “scars.” The “strife” of their lives has become the “common law.” It structures who they are and how they live.

At its most simple level, this poem is about human resilience and strength. Malloch uses images of the natural world to make his arguments about how one gains this strength, a fact that makes the poem all the more easily understood. Readers should also look to poems such as ‘Still I Rise‘ by Maya Angelou, ‘Invictus‘ by William Ernest Henley, and ‘The Survival’ by Rudyard Kipling for other examples of how writers understand human strength and determination.