Clown in the Moon by Dylan Thomas

In this complex poem Thomas explores themes of sorrow, solitude, and loneliness. ‘Clown in the Moon’ is short, but it uses several powerful images that tap into the full range of human senses to depict these themes. Thomas’s speaker is lonely and he speaks with a depressed and resigned tone that helps a reader understand the nature of his existence. 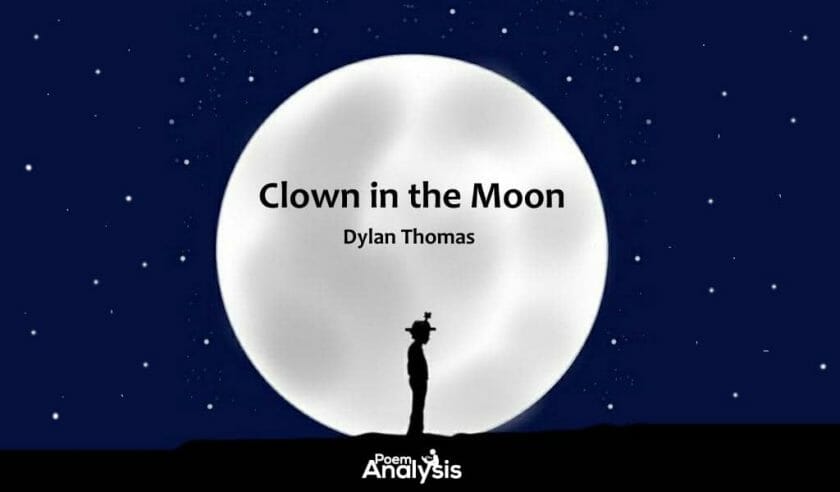 Explore Clown in the Moon

Summary of Clown in the Moon

‘Clown in the Moon’ by Dylan Thomas is a surprisingly complex and moving poem that depicts a solitary figure at an impossible distance from humanity.

The poem is told from the perspective of a metaphorical clown in the moon. The first lines describe his tears and relate them to a magic rose. They move calmly and slowly down his face, they “drift” as the petals do. He looks down on earth and knows that he cannot go there, he can’t touch it. The clown, which should by definition be happy, is at a loss for connection to another person.

Structure of Clown in the Moon

‘Clown in the Moon’ by Dylan Thomas is a two stanza poem that is separated into two sets of four lines, known as quatrains. These quatrains follow a rhyme scheme of ABAB CDEF. The pattern fits in with the content of the poem. The first lines depict the nature of the speaker’s grief while the next describe the rumbling of the earth and the disruption of a dream. At the same time as these latter lines are playing out, the rhyme scheme disappears as well. It too crumbles.

There are also examples of internal half and full rhyme in the poem. The latter can be seen in the first stanza with “rose” and “flows,” and “snows” in lines one and two. Half-rhyme, also known as slant or partial rhyme, is seen through the repetition of assonance or consonance. This means that either a vowel or consonant sound is reused within one line, or multiple lines of verse. For example, “skies” and “snows” in the fourth line of the first stanza and “like” and “quiet,” both of which use the long “i” vowel sound, in line one of the same stanza. This assonant strand picks up again in the last line of the same stanza with “skies”.

Poetic Techniques in Clown in the Moon

Thomas makes use of several poetic techniques in ‘Clown in the Moon’. These include, but are not limited to, anaphora, alliteration, enjambment, and simile. The first, anaphora, is the repetition of a word or phrase at the beginning of multiple lines, usually in succession. This technique is often used to create emphasis. A list of phrases, items, or actions may be created through its implementation. For example, “Of” in lines two and four of the first stanza and “It” in lines two and three of the second stanza.

Sibilance is similar to alliteration but it is concerned with soft vowel sounds such as “s” and “th”. This kind of repetition usually results in a prolonged hissing or rushing sound. It is often used to mimic another sound, like water, wind, or any kind of fluid movement. For example, “skies and snows” in line four of the first stanza.

A simile is a comparison between two unlike things that uses the words “like” or “as”. A poet uses this kind of figurative language to say that one thing is similar to another, not like metaphor, that it “is” another. There are several examples of similes in ‘Clown in the Moon’. For instance, the first line where the speaker describes his tears as the “quiet drift of petals from some magic rose” or, in the final lines, when he describes the crumbling of the art as “tremulously like a dream”.

Enjambment is another important technique. It occurs when a line is cut off before its natural stopping point. Enjambment forces a reader down to the next line, and the next, quickly. One has to move forward in order to comfortably resolve a phrase or sentence. For example, the transition between lines one and two of the first stanza.

Analysis of Clown in the Moon

In the first stanza of ‘Clown in the Moon’ the speaker, who is a metaphorical clown in the moon, begins by using a simile to compare his tears to the “quiet drift / Of Petals from some magic rose”. This is a very evocative image that taps into the full range of human senses. One can consider the rose, it’s unusual and otherworldly nature and how that might relate to the emotional grief the speaker is facing. His tears move calmly and slowly down his face, they “drift” as the petals do. But they are also connected to something larger and more important than the act of crying itself, just as the petals are connected to something larger than themselves.

He is looking to the past for another way to describe his emotional state. His grief is likely being triggered by his distance from the rest of life. He sees time as “unremembered skies and snows”. This can relate back to the falling of tears and the world that the clown metaphorically inhabits. A reader should also consider why Thomas chose to use a clown in the title of the poem. He is not speaking literally about a clown in the moon, but using it to represent a larger emotional state, one of isolation and consumed emotions. The perpetually happy clown is in a state of unstoppable grief.

In the second stanza of ‘Clown in the Moon’ the speaker considers what it would mean for him to come to earth. It seems impossible. He believes that if he “touched the earth” it would “crumble”. There is no way for him to go there and be with other people. He’s too far away to be a part of humanity.

Other worlds, places where he might be happy to together with other people, are distant. Thomas uses the metaphor of this perpetually happy, unhappy, figure on the moon to speak on what it is like to feel that far away from other people. Thomas is perhaps commenting on an emotional state he has himself experienced and the moments where he felt impossibly far away from everyone else.