A Time for Everything by King Solomon (Ecclesiastes 3)

These words have offered comfort to those who are mourning loss, and brought joy to those experiencing life’s miracles. These are words that were written by King Solomon in ancient Jerusalem, penned within the book of Ecclesiastes. These words have truly stood the test of time, if any ever have. Written thousands of years ago by the King of a culture foreign to most in today’s modern world, the words still ring true. This poem is universal, and has spoken into countless hearts during times of joy and times of mourning. For those who believe that the Bible is a Holy book and a true book, these words hold even more significance, because they were written by one in authority. King Solomon, the author of this poem, is said to have been given wisdom greater than any before him, and greater than any who would come after him. God granted to Solomon his request for wisdom. Thus, these words are held in high regard by any who believe that King Solomon of Israel was indeed the wisest man the world has ever known. Some take the words of King Solomon in the book of Ecclesiastes to be the words of God himself, spoken through King Solomon. Therefore, it is evident why this particular poem has been such a great source of comfort and strength to those who believe that the book is sacred. 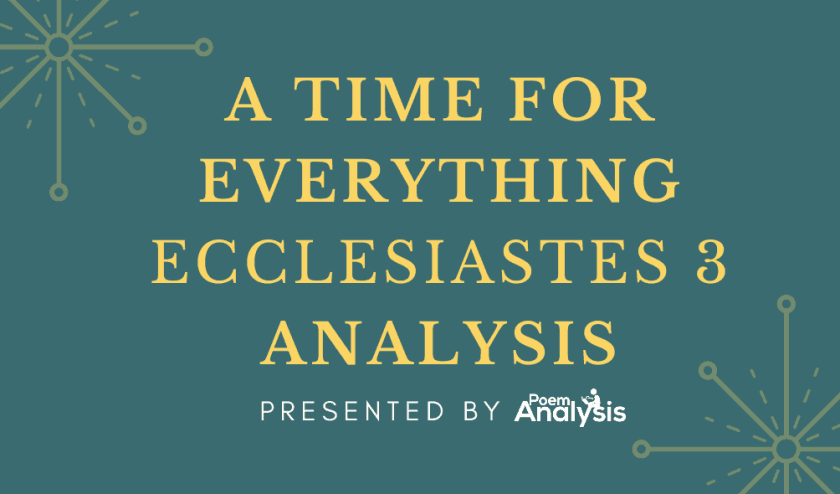 A Time for Everything (Ecclesiastes Chapter 3) Analysis

For everything there is a season, and a time for every matter under heaven:

a time to be born, and a time to die;

The speaker begins to list all the events in life that have a specific time and place. He begins with birth. Every person is appointed a time to be born, and a time to die. This is comforting to readers because it is clear that birth and death are not merely happenstance. This verse gives the impression that birth and death alike are carefully planned by God, and that the hand of God is in it. These words give readers hope that the death of a loved one was all a part of a greater plan. It also offers joy to a family who welcomes a newborn child by implying that the birth of that child was also something planned by a higher being, and so that child is not the result of chance and will not be at the mercy of happenstance. Rather, it gives the impression that God has a plan for the child, and that whatever may happen in the child’s life will be seen by God and allowed by God.
a time to plant, and a time to pluck up what is planted;

a time to kill, and a time to heal;

The second part of this verse reveals that there is a time for tearing down old buildings, and a time for building up new ones. These buildings can also symbolize life. Just as the human body deteriorates and eventually dies, so buildings can deteriorate and fall down. A new building going up can represent a new life being born.

a time to weep, and a time to laugh;

This is a verse that everyone can identify with because every human has laughed and cried at some point or another in his lifetime. This verse allows the readers to feel that it is okay to weep when the situation calls for tears, and that it is good to laugh to feel joyful at certain times in life.
a time to mourn, and a time to dance;

The second part of this verse corresponds with the first. Just as there is a time to cry, and a time to feel joy, there is also a time to mourn, and a time to celebrate with dancing. The juxtaposition of such things as weeping and mourning with laughing and dancing allow the readers to grasp the vast diversity of the human experience in just a few short words.

a time to cast away stones, and a time to gather stones together;

The speaker continues to use the practical aspects of life alongside the abstract. He talks about gardens and buildings, birth and death, sadness and joy. In this way, the speaker brings together the physical, the spiritual, and the emotional to allow the audience to grasp the underlying meaning of them all, and to understand that there is meaning and order behind every occurrence.
a time to embrace, and a time to refrain from embracing;

a time to seek, and a time to lose;

a time to keep, and a time to cast away;

a time to tear, and a time to sew;

This verse is another verse that draws the reader’s attention to the physical. The reader can imagine someone sewing up a garment when it can be reused and is needed. The speaker also claims that there is a time to tear. The reader can understand that there is a time when a garment is no longer of any use, and should be torn up and used as rags. This verse, however, like the many before it, can also symbolize the abstract. There is a time break off a friendship, and a time to mend it.

a time to keep silence, and a time to speak;

The second part of this verse reveals a universal truth that every person has experienced. There is a time to speak your mind, and a time in which it is best to keep silent. Readers can identify with this because most, if not all people have said something they regret and wished they could go back and choose to remain silent. In the same way, most, if not all people have remained silent in a time they should have spoken up. This verse reveals that all people have experienced this at one time or another. It also reveals that a person with wisdom will be able to decipher between the moments in which to remain silent and the situations in which to speak up.

a time to love, and a time to hate;

This verse reveals that not all hatred is wrong. Although many people who hold the Bible to be true will claim that it is all about love, this verse reveals that there is also a time and place for hate. Many have referred to this as “righteous indignation” or the feeling that comes over the upright when they see a wrong being done. This verse suggests that there is a time and place for both love and hate. Both are normal human emotions, and there is a place for them both.

The second part of this verse, and the last line in this poem, reveals that there is even a time for war. Although war and all of its horrors should be avoided, this verse reveals that there are times when it simply cannot be avoided. The first part of this verse suggests that there is a time for love and a time for righteous anger. Righteous hatred is something that comes when the innocent have been wronged. Often, when this happens on a larger scale, war is the result. Although we know that wars have often been over such things as freedom, humanity, and sometimes even money, we also know that war often begins with righteous indignation, where one party feels they ought to step in and end some form of evil. This verse reveals that there is indeed a time for war. And, considering the early part of this verse, the context seems to imply that the time for war is when there is righteous anger over wrongdoing. The last phrase of the poem states that there is a time for peace. This leaves the readers with a sense of peace that is the effect of the poem in its entirety. Although there is a time for everything, the poem ends in peace and gives the readers an overall sense of calm, and the ability to understand that every circumstance in life has its place and time.

At Gibeon the Lord appeared to Solomon in a dream by night, and God said, “Ask what I shall give you.” 6 And Solomon said, “You have shown great and steadfast love to your servant David my father, because he walked before you in faithfulness, in righteousness, and in uprightness of heart toward you. And you have kept for him this great and steadfast love and have given him a son to sit on his throne this day. 7 And now, O Lord my God, you have made your servant king in place of David my father,although I am but a little child. I do not know how to go out or come in.8 And your servant is in the midst of your people whom you have chosen, a great people, too many to be numbered or counted for multitude.9 Give your servant therefore an understanding mind to govern your people, that I may discern between good and evil, for who is able to govern this your great people?”

10 It pleased the Lord that Solomon had asked this. 11 And God said to him, “Because you have asked this, and have not asked for yourself long life or riches or the life of your enemies, but have asked for yourself understanding to discern what is right, 12 behold, I now do according to your word. Behold, I give you a wise and discerning mind, so that none like you has been before you and none like you shall arise after you.

For this reason, many people hold to the idea that Solomon was indeed the wisest man to ever walk the earth. There is no doubt that he did possess wisdom enough to write a poem that so captured the human experience. The poem has become a timeless poem, and one that many people across cultures and generations have turned to for comfort in times of mourning. This poem speaks to the human experience, and with a few short lines, effectively sums up the emotional experience of people from all periods of time and all walks of life.

Allisa graduated with a degree in Secondary Education and English and taught World Literature and Composition at the high school level. She has always enjoyed writing, reading, and analysing literature.
Subscribe
2 Comments
Newest
Oldest Most Voted
Inline Feedbacks
View all comments