‘First Fig’ by Edna St. Vincent Millay is a well-loved and often discussed poem. In it, readers can explore a symbolic depiction of sexuality and freedom.

‘First Fig‘ was published in A Few Figs From Thistles. It was the first poem in the volume, thus its title. This collection was only her second and was published three years after she graduated from Vassar College. The poem is a beautifully short exploration of Millay’s personal life and when reading with knowledge of her early death in 1950, feels quite prophetic.

One of the reasons that this poem has become so popular is due to its vagueness. The “candle,” which is clearly the most important symbol in the poem, is not well defined. Readers can interpret it any way they choose depending on their own life experiences. 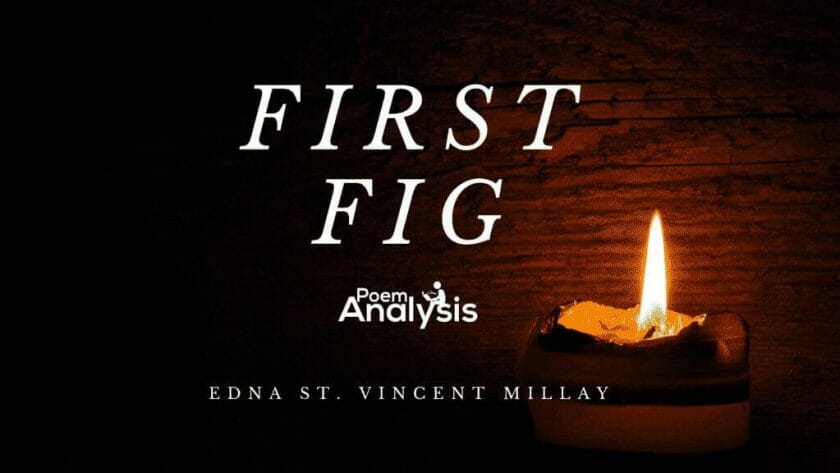 ‘First Fig’ by Edna St. Vincent Millay is a very short, impactful poem that addresses the poet’s own life, sexuality, and career.

In the four lines of ‘First Fig,’ the poet creates an extended metaphor with the image of a candle burning at both ends. The candle, which comes to represent everything from sex to literature, works to depict Millay’s well-lived life. Despite the fact that it can’t burn forever, she wants everyone to admire it’s “lovely light”.

Millay engages with themes of change, gender, and language in ‘First Fig’. Depending on how one reads this poem, there are various things that the candle can symbolize. It’s very likely though that this poem is concerned, at least in part, with Millay’s own sexuality and her love for both men and women. She uses the candle to speak on this facet of her life but also on her career and the change that comes with progress.

Millay is also crafting a simple and easily digestible message with this poem to her “foes” and “friends”. She asks them to listen to her, and pay attention to the life and career she is living.

Structure and Form of First Fig

‘First Fig’ by Edna St. Vincent Millay is a short four-line poem that is contained within one stanza. These lines follow a rhyme scheme of ABAB and a metrical pattern that is similar to that of a ballad with a few changes. Rather than alternating between iambic tetrameter and iambic trimeter the first line has seven total syllables rather than eight. This creates an immediate sense of tension that matches up well with the content.

Millay makes use of several literary devices in ‘First Fig’. These include but are not limited to alliteration, caesura, and metaphor. The latter is the most important literary device that she employs in the poem. It’s around the central extended metaphor that the whole poem is formed. The candle burning at both ends is a clever metaphor for a life well and fully lived. Depending on one’s knowledge of the poet’s life, and one’s own life experiences, the candle will represent different things.

Alliteration is quite common in this short poem, something that draws even greater attention to it. For example, “burns” and “both” in Lin one and “lovely light” in line four. There are other examples as well. Caesurae are examples of lines that the poet has devised up using punctuation. For example, line three in which she takes the time to address her “foes” and “friends”.

My candle burns at both ends;

In the first line of this poem, the speaker states write simply that her “candle” is lit and is burning at both ends. It’s possible to interpret this poem in several different ways with the candle serving as a symbol for life, sex, or even one’s career. It is very likely that Millay was thinking about more than one aspect of her life. No matter what the central candle is symbolizing, it isn’t going to last for long. It is, in fact, not going to “last the night”. It’s going to be extinguished before its time, simply because it is being burnt at both ends.

The candle is part of an extended metaphor that lasts throughout the entire poem.

In the third line she asks for the attention of her “foes” and her “friends,” a good example of alliteration. It should also be noted that she addresses her “foes” first. Her words are strong, determined, and don’t sound at all like someone who’s about to burn out. The third line is also an example of an apostrophe. This is a literary device in which the speaker addresses someone, or multiple people or things which either can’t understand her or aren’t actually present.

Despite the fact that the candle is soon to be extinguished Millay asks friends and foes to note how bright it shines. Its light is lovely. This makes it seem as though burning her candle at both ends has been worth it. She’s going to go out in a blaze of light.

As a poem distinctly about life, ‘First Fig,’ might inspire readers to investigate other poems of a similar nature. Some other possible options include ‘The Road Not Taken’ by Robert Frost, ‘If-‘ by Rudyard Kipling, ‘Life Doesn’t Frighten Me’ by Maya Angelou, and ‘Life’ by Charlotte Brontë. All of these poems take on themes related to those found in ‘First Fig’ including life, possibilities, change, and happiness.