Edward FitzGerald was born in Bredfield, Woodbridge, Suffolk, England, in March of 1809. His father was John Purcell, a member of Parliament. The family’s last name originated from his mother’s side of the family. She was the beneficiary of a large fortune after the death of an aunt and her father. FitzGerald’s parents were some of the wealthiest people in England and largely indifferent to their children. 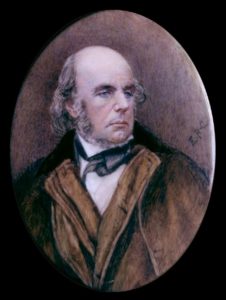 When FitzGerald was seven the family moved to France. They lived in Paris and St. Germain for a short period of time before returning to England. Three years later the young FitzGerald was sent to school at King Edward VI Grammar School in Bury St Edmunds then later to Trinity College, Cambridge. While there he came to know William Makepeace Thackeray, William Carlyle, and Alfred Lord Tennyson.

After his education, he went to live in Paris on the battlefield of Naseby and then moved permanently to Suffolk. Due to his family’s wealth, it was not necessary for him to work. He spent his time in the arts and studying nature. He was interested in translations and essay writing as well as editing the work of others.  FitzGerald was very aware of the success of his contemporaries and did not feel any kind of pressure to follow in their footsteps.

FitzGerald would eventually marry Lucy Barton and quickly separate from her within a year. He had no desire to see her ever again but continued to provide her with financial support.

His first book, Euphranor, was published in 1851. It was a Platonic dialogue that emerged from memories of his time at Cambridge. His second published work was Polonius. It was followed by Six Dramas of Calderon, Freely Translated by Edward FitzGerald. This work was the result of Spanish language lessons. He would go on to commit himself to learn Persian. This new period of study led to his publication of Sálamán and Absál of Jami in Miltonic verse.

For the first time in 1859, FitzGerald published a translation of Rubáiyát of Omar Khayyám. It was re-editioned three more times during his lifetime and once more in 1889 after his death. FitzGerald died in June of 1883 at the age of 74. His final translation was A Bird’s-Eye view of the Bird Parliament. It is now considered an unrecognized masterpiece.