Edward Taylor wrote ‘Huswifery’ around 1685. He was a puritan preacher and used his poetry to convey his religious conviction. He addresses ‘Huswifery’ directly to God, a technique known as an apostrophe. Through the text, he offers himself entirely to God. 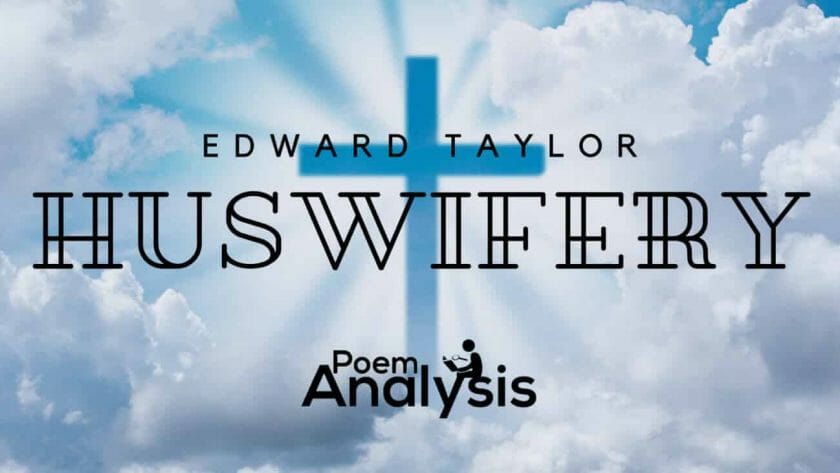 ‘Huswifery’ by Edward Taylor is a deeply religious and metaphorical poem that uses fabric making as a way to depict religious conviction.

The poem, which is addressed to the Christian God, begins with the speaker asking that he be transformed into the machinery needed to create a divine fabric of God’s will. This process will allow more followers to come to God’s side and the speaker wants to be an integral part of that. Once the cloth is complete, the speaker will cover himself in it so that his entire being is at God’s command and he is prepared for glory.

‘Huswifery’ by Edward Taylor is a three-stanza poem that is separated into sets of six lines, known as sestets. The lines rhyme in a constant pattern of ABABCC, changing end sounds from stanza to stanza. The majority of the end rhymes in ‘Huswifery’ are perfect. Taylor also structured the meter in a very consistent way. They mostly all conform to the pattern of iambic pentameter. This means that each line contains five sets of two beats. The first of these is unstressed and the second is stressed.

Taylor makes use of several literary devices in ‘Huswifery’. These include but are not limited to caesura, metaphor, and apostrophe. The latter, apostrophe,  is an arrangement of words addressing someone, something, or creature, that does not exist, or is not present, in the poem’s immediate setting. The exclamation, “Oh,” is often used at the beginning of the phrase. The person is spoken to as though they can hear and understand the speaker’s words. In this case, the lines of this poem are directed towards God.

Caesura occurs when a line is split in half, sometimes with punctuation, sometimes not. The use of punctuation in these moments creates a very intentional pause in the text. A reader should consider how the pause influences the rhythm of one’s reading and how it might precede an important turn or transition in the text. There is a good example in line three of the second stanza. It reads: “Then weave the Web thyself. The yarn is fine.”

A metaphor is a comparison between two, unlike things that do not use “like” or “as” is also present in the text. When using this technique a poet is saying that one thing is another thing, they aren’t just similar. In this case, Taylor makes use of an extended metaphor, one that lasts over many lines. It can be seen through the fabric imagery and the means of creating cloth. The poet, who is very likely the speaker in ‘Huswifery’ asks to be transformed into the elements needed to make cloth and then later that he be covered by that same cloth, dedicating himself to God.

Thy Holy Worde my Distaff make for mee.

And make my Soule thy holy Spoole to bee.

My Conversation make to be thy Reele

And reele the yarn thereon spun of thy Wheele.

In the first stanza of ‘Huswifery’ the speaker addresses God. The entire poem is aimed at the poet’s “Lord,” a technique known as an apostrophe. He asks God to make him his “Spining Wheele compleate”. Or, a fully functioning spinning wheel. He wants to be in God’s control and ready when God wants to utilize him for a divine purpose. The next lines take on a similar form as he asks to be made into the bits and pieces of machinery that are used to make fabric. He wants his “Affections,” or thoughts and feelings, to become the “Swift Flyers” or the spinning wheel’s flyers. His soul will be the “holy Spoole”.

It is through the speaker’s metaphorical transformation into this piece of machinery that he’ll be able to reach more people. His “Conversation” will allow God’s words to reach more people and “reele the yarn thereon spun of they Wheele”. The speaker, and very likely the poet, want to play any part possible that results in more people coming to and dedicating themselves to God. The followers will come, ideally, just as the yarn is wrapped around the spool.

Make me thy Loome then, knit therein this Twine:

Then weave the Web thyselfe. The yarn is fine.

Then dy the same in Heavenly Colours Choice,

The speaker wants to be God’s “Loome” on which he knits the “Twine” of his divinity. The yarn, once prepared, will be woven into cloth by God himself. The cloth is worked on further. It will be dyed and purified until it resembles heaven.

Then cloath therewith mine Understanding, Will,

My Words, and Actions, that their shine may fill

My wayes with glory and thee glorify.

Then mine apparell shall display before yee

That I am Cloathd in Holy robes for glory.

In the third and final stanza of ‘Huswifery’, the speaker describes in greater detail what the cloth is going to accomplish and how he sees himself as part of the process. He says that its the cloth, he’d like to cover his “Understanding, Will, / Affections” and more. It will cover up every part of the speaker, showing his full dedication to God. If this occurs, then the speaker knows his life will be illuminated by God’s glory. His “apparell” will show God that he is dressed in “Holy robes” and prepared for “glory”.

Gothic literature, poetry, and prose is that which deals with themes of death, the supernatural, sorrow, fear, loss, and more.
Full Description | Glossary