a man who had fallen among thieves by E.E. Cummings

E. E. Cummings’ ‘a man who had fallen among thieves’ is a modern retelling of the parable of the Good Samaritan who helped a robbed man lying unconscious on the road. In this poem, the speaker helps one such person who faced a similar accident. 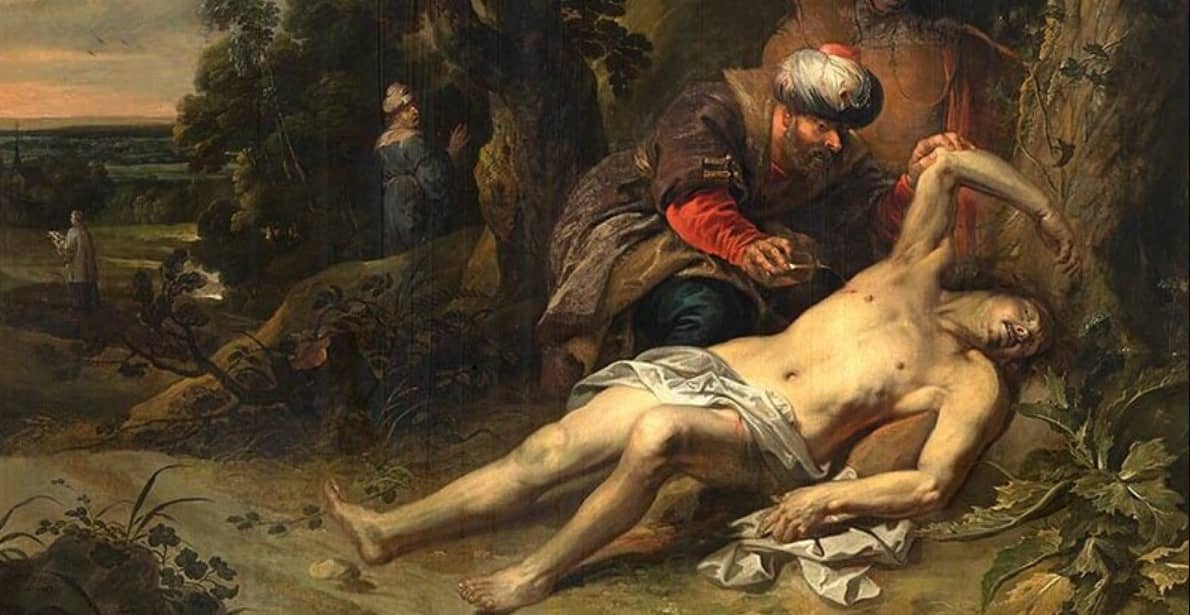 In the poem ‘a man who had fallen among thieves,’ E. E. Cummings narrates an incident where he helped a man who had been robbed and was lying unconsciously on the roadside. The poem has an underlying biblical reference to the parable of the Good Samaritan. In the parable, Christ narrates, a man was going down from Jericho to Jerusalem. He fell among thieves, who robbed him and beat him. After that, they left the man unconscious on the road. This biblical allusion enhances the overall meaning and message of Cummings’ poem.

Explore a man who had fallen among thieves

In ‘a man who had fallen among thieves,’ E.E. Cummings describes a man who had been robbed, devastated, left half-dead on the road by thieves.

Cummings’ speaker describes a man who was lying inertly on the roadside after being robbed by some hooligans. He was laid on his back with his frozen vomit, with the zipper open and hands haywire. According to the narrator, the man was vulnerable and incapable of helping himself. The “staunch” and “lail” citizens walked past him as if he was not noticeable. Finally, the narrator helped him regardless of his filthy state. In this way, Cummings implies that people in distress should be helped despite their situation. The narrator essentially acts as the “Good Samaritan” in the poem.

a man who had fallen among thieves

wearing a round jeer for a hat

The mood of E. E. Cummings’ poem ‘a man who had fallen among thieves’ is dark and dull in the beginning. In the first stanza, Cummings’ narrator describes a man who had been robbed. The man was lying unconscious on his back on the roadside, with wandering thoughts in his mind. He was dressed peculiarly with “fiteenthrate ideas” and “a round jeer for hat.” These phrases give an idea of the man’s clothes. Being beaten and harassed, he looked like a “jeer,” arousing fifteen-fold ideas in the narrator’s mind. This disoriented state of the man gives the verse a humorously dark tone.

fate per a somewhat more than less

endowed him with a changeless grin

In the second verse, the narrator says that the man’s face gave him a “changeless grin” in place of his “consciousness.” This could allude to the fact that the man had still not processed the things that happened to him. Therefore, his brain was disarrayed, giving impetus to disoriented thoughts. Besides, the phrase “emancipated evening” means a free evening without any disturbance. One could sleep as long as one wanted in such an evening. The tone in this stanza is satirical and ironic.

whereon a dozen staunch and leal

sought newer pastures or because

Cummings shifts the focus from the man to the people that passed him by. His narrator describes how despite seeing the man in his vulnerable condition, people refused to help him. They pretended not to notice him and went on their “hypercivic” ways. These lines also refer back to the passersby from the Biblical parable. They responded similarly to the man before the arrival of the Good Samaritan. Besides, the word “hypercivic” is used to describe that it was natural for them to ignore the man. So, they overlooked him and sought “newer pastures” for pursuits more interesting than the half-dead, unconscious man.

swaddled with a frozen brook

as if he did not care to rise

In the fourth stanza, Cummings zooms back to the man. According to the narrator, the man was lying beside a frozen brook. The frozen pink stain of blood was on his pale cheek. He was covered in his own puke and unconscious. Even though he was in a dying state, nobody cared to notice him. His appearance made the narrator feel like he did not care to rise. After being robbed and beaten up in such a manner, only a few have the courage to rise and start again.

one hand did nothing on the vest

In the fifth stanza, the speaker describes how the man could not rise at all since he had been stripped and his trouser fly was open. One of his hands was lying idly on his vest, and the other, “its wideflung friend,” clenched dirt. Cummings uses paradox in the last two lines, as he says that a “mute trouserfly” “confessed” to a “solemnly inert” button. Firstly, how can a zipper confess to another object? Secondly, how can a mute thing confess? Overall, the speaker’s tone of this section is sad. It makes the readers feel empathy for the half-dead man.

Brushing from whom the stiffened puke

In the last quatrain, the narrator says that he decided to help the man, even though no one was helping him. At first, he was passive, but somehow he gathered enough kindness to help the man. In the last lines, the narrator “staggered banged” with terror after looking at the brilliance of stars. He realized that the universe is infinite and wide, and thus, realizing how insignificant a man is. Therefore, people should help each other out and keep the spirit of humanity alive in this larger scheme of the universe.

This poem can be looked at through different lenses such as moral, religious, humanitarian. However, the core message that Cummings wants to convey is people should be kind to one another and help those in dire situations. The poem ends on a whimsical note, where the speaker realizes how vast the universe is and how small man is. Thus, small acts of kindness go a long way.

This piece is also related to the Biblical story of a man who was robbed and stripped and then saved by a good Samaritan. In this poem, the “Good Samaritan” is the narrator. Besides, Cummings also talks about how people usually ignore anyone who requires help, as the “citizens” did in this poem. In the end, Cummings urges readers to be the ones who care about others and help others in their needs.

Cummings’ ‘a man who had fallen among thieves’ resembles the ballad form as it narrates a story of a man who had been robbed and beaten up badly. Like ballads, the rhyme scheme of this piece is roughly ABCB. The second and fourth lines of each quatrain do not rhyme perfectly. Besides, there is no specific metrical pattern. The poem is composed mainly of iambic feet. There are a total of six quatrains with four lines each. The tone of the poem is cynical in the beginning and ironically empathetic in the end.

The poetic devices used in ‘a man who had fallen among thieves’ are as follows:

Edward Estlin Cummings (1894-1962), often styled as e e cummings, was an American poet. Cummings is regarded as one of the most important 20th-century American poets. E. E. Cummings poems are best-known for their unconventional syntax and use of lower-case spellings for achieving the artistic effect. His best-loved poems include ‘[i carry your heart with me(i carry it in],’ ‘l(a (A Leaf Falls with Loneliness),’ ‘next to of course god america i,’ etc. His poem ‘a man who had fallen among thieves’ is an allusion to the Biblical text of Luke 10: 30-37, the parable of the Good Samaritan. It was first published in 1926 and later included in the collection, Complete Poems, 1904-1962.

What is the poem ‘a man who had fallen among thieves’ about?

E. E. Cummings’ poem ‘a man who had fallen among thieves’ is about a man who got robbed and stripped by a bunch of thieves. He was lying unconsciously on the roadside, and no one helped him out. In the end, the narrator decides to brush him up out of the kindness of his heart.

What type of poem is ‘a man who had fallen among thieves’?

It is a narrative poem that consists of six quatrains or stanzas, having four lines each. The rhyme scheme of the poem is ABCB. This lyric is written from the perspective of a first-person speaker.

What is the theme of ‘a man who had fallen among thieves’?

The central theme of the poem is kindness versus indifference. In this poem, the poet describes how people turn a blind eye to those in need rather than helping them out. It also taps on the themes of humanity, suffering, and insignificance of humankind.

What is the tone of ‘a man who had fallen among thieves’?

The tone of the poem is dark, ironic, and cynical in the beginning. In the last lines, it turns into a hopeful and compassionate one.

What is the message of ‘a man who had fallen among thieves’?

The message of the poem is that one should be kind and help those in need. Cummings conveys this message to readers through the story of a narrator who helped a robbed man.

The following list contains a few poems that similarly tap on the themes present in E. E. Cummings’ poem ‘a man who had fallen among thieves.’

Home » E.E. Cummings » a man who had fallen among thieves