All in green went my love riding by e.e. cummings

‘All in green went my love riding’ was published in 1923 in Cummings’ first collection Tulips & Chimneys. This poem is a great example of the way that Cummings used his first volume to play with the methods he is known for today. His writing is usually associated with creative alterations of meter, line, spacing, punctuation, and imagery.

This poem is one of his most famous. In it, readers will find evidence of Cummings’ original use of literary devices, themes, and various other techniques. Despite Cummings’ contemporary fame, when this collection came out it was not received with the admiration and respect it deserved. Later in his life, he even had trouble getting his poetry published. 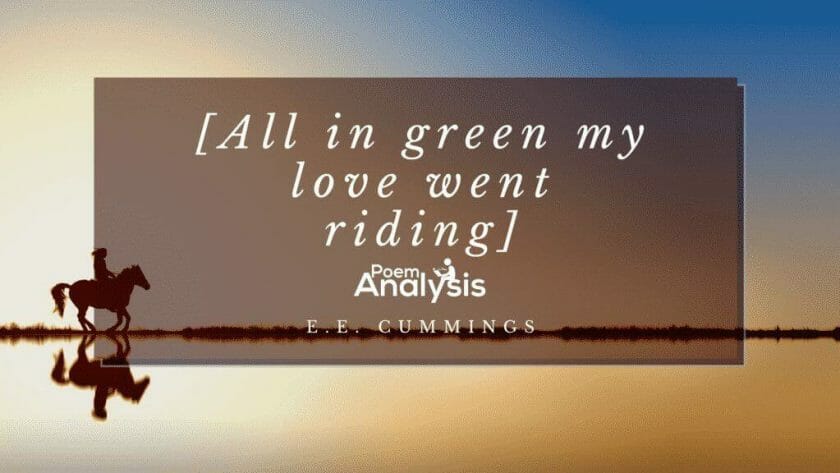 Explore All in green went my love riding

‘All in green went my love riding’ by E.E. Cummings speaks on a dangerous relationship through an elaborate hunting metaphor.

In the fourteen stanzas of ‘All in green went my love riding,’ the poet describes a hunter, his love, who is riding through the “silver dawn”. The beautiful imagery is juxtaposed against the coming death of the death, the flight of the arrow, and the twist ending. After spending a great deal of time expressing his admiration for the deer, the speaker reveals that the arrow pierced his own heart. The deer was nothing more than a metaphor for his life and their relationship.

Throughout ‘All in green went my love riding’ the poet engages with themes of love, violence, and nature. All of these are intertwined tougher in the extended metaphor that makes up the poem. The speaker’s affection for the hunter is clear from the beginning but the broader nature of their relationship is more complicated. The pursuit of the deer and the violence the hunter employed is used as a way to describe her side of what seems to be a one-sided relationship.

‘All in green went my love riding’ by E.E. Cummings is a fourteen stanza poem that alternates between three and two-line stanzas. Unlike the majority of Cummings’ poems, this one does have a discernible metrical pattern. It is written, to an extent, in ballad meter or hymn meter.

This form is perfect for the content but it doesn’t follow the exact pattern one might expect. Each line contains four sets of to beats but rather than iambs they are trochees. This means that the first syllable of each pair is stressed rather than the second syllable. The reversal of iambs and trochees is one of the most interesting formal choices that Cummings’ made. Readers should consider how the content of the poem (a speaker who has been killed by his lover) is different from a normal ballad.

Cummings makes use of several literary devices in ‘All in green went my love riding’. These include but are not limited to alliteration, enjambment, and imagery. The first of these, alliteration, is seen through the use and reuse of consonant sounds at the beginning of multiple words. For example, “great” and “gold” in line two of the first stanza and “dappled dreams” and “deer” (twice) in stanza three. There are numerous other examples that help to establish a steady rhythm to the poem.

Enjambment is another important technique that is used to control the speed at which a reader moves through a poem. It can also create suspense, drama, and confusion as lines are cut off before their natural stopping point. For example, the transition between the three lines of the first stanza.

Imagery is one of the most important literary devices in ‘All in green went my love riding’. It is seen throughout the poem with the use and combination of descriptions. For example, these two lines from stanza eleven “the sleek slim deer / the tall tense deer”. Imagery is more than just describing something that’s easy and interesting to imagine. It is also about creating a certain feeling and taping into various senses such as touch and smell.

All in green went my love riding

the merry deer ran before.

In the second stanza, the reader will encounter the first instance of the refrain. Along with his love, there are “four lean hounds” and the “merry deer”. The latter is a very good example of personification. He describes the deer as“merry”. It’s clear from the details of the “hounds” and the “deer” that the woman riding is in fact hunting.

Fleeter be they than dappled dreams

the cruel bugle sang before.

The third stanza of ‘All in green went my love riding,’ contains several examples of alliteration which help to paint a rhythmic and poetic depiction of the deer. They’re beautiful, red, and swift. He states that they are more fleeting than “dappled dreams,” an unusual comparison but one that adds to the dream-like qualities of this poem. Readers should also take note of the parallelism in lines two and three of the third stanza. The sentences are similar in every way except that the adjectives change.

Following the second three-line stanza is the second two-line stanza. Here, the speaker describes a “cruel bugle” that singing out in the scene. This is very likely a hunting horn, “cruel” because of the fate that’s in store for the deer.

the level meadows ran before.

The fifths stanza of ‘All in green went my love riding,’ reveals that it is the speaker’s lover who blew the horn. It is at her “hip” as she goes riding into the “silver dawn”. It is at this point that repetition starts to become very important in ‘All in green went my love riding’. Cummings uses it again, in the form of anaphora, at the beginning of the sixth stanza. He starts the stanza with “four lean hounds crouched low and smiling” just like in the second stanza. This time though, the “level” meadow is the focus rather than the deer.

Softer be they than slippered sleep

the famished arrow sang before.

The alliteration in the seventh stanza of ‘All in green went my love riding,’ is unavoidable. The repetition of the “s” consonant sun emphasizes exactly what its describing, the smooth, slippery way the deer move through the meadow. They are “lean lithe” and once again, “fleet”. It is clear that the speaker is quite concentrated on the deer, even more so than the hunter/his lover.

The eighth stanza describes the arrowing chasing out after the deer, an unsurprising turn of events. The arrow is “famished,” longing to meet with the flesh of a deer.

the sheer peaks ran before.

The ninth stanza is another example of repetition and refrain. The lines are very similar to the first stanza, with only a few alterations. This time he describes the “Bow” that she has in her possession.

There are not many changes between this stanza and the previous. She is still riding out in the field in what is a very dreamy setting. It seems that at least right now, this is all that exists in the speaker’s world. More is added to the setting in the tenth stanza. Now there are “sheer peaks”. While the setting is expanding, Cummings also makes it seem as though the hunter, dogs, and deer, are on a long journey, moving from one landscape to the next.

Paler be they than daunting death

the lucky hunter sang before.

In the eleventh stanza of ‘All in green went my love riding’, “death” is confirmed as part of the story. It is “daunting” and the deer are even more “pale” than it is. They are “tense,” making it seem that they are fully aware that death is coming. The hunter follows as she has been throughout the poem. She’s headed towards the deer, chasing them down.

All in green went my love riding

my heart fell dead before.

The thirteenth stanza of the poem is an exact replica of the first stanza. After reading the following stanza, the thirteenth feels like preparation, as if it is building up to the final point of action that concludes the poem.

It becomes clear in the last lines of the poem why the speaker put so much focus on the deer. All the while they were a metaphor for his heart, that is what she was pursuing, with the intent to kill. Due to the continued repetition that has taken up the vast majority of the poem, this change, and revelation at the end is even more powerful.

This is quite an unusual love poem made all the more moving by its striking final line. But, this is far from the only alternative love poem in existence. Readers might also be interested in Emily Dickinson’s ‘Wild nights – Wild nights!’ in which the speaker depicts herself as Eve, the first woman created by God. Another interesting option is ‘The Skunk’ by Seamus Heaney in which he describes his wife using zoomorphism. More traditional options include ‘Annabel Lee’ by Edgar Allan Poe and ‘I Do Not Love You’ by Pablo Neruda.

Home » E.E. Cummings » All in green went my love riding