E lizabeth Barrett Browning is now considered to be one of the best-loved poets of her age. She is remembered for poems like ‘George Sand: A Desire,’ her Sonnets from the Portuguese, and ‘Aurora Leigh’.

‘Sonnet 14: If thou must love me’ contains one speaker’s ideas about how she wants to be loved. She says that she wants to be appreciated for love’s own sake. It is important to her that her lover loves her for things that are permanent, rather than her smile or her appearance. She wants a love that’s going to last through “eternity”.

‘George Sand: A Desire’ is dedicated to the French writer Amantine-Lucile-Aurore Dupin who wrote under the name, “George Sand”. Throughout, Browning praises the writer for her work but expresses her belief that Dupin should’ve written under her own name. Despite this, she still appreciates the woman’s strength she showed through the subject matter she delved into.

‘Sonnets from the Portuguese 24’ Let the world’s sharpness’ is another one of Browning’s famous Petrarchan sonnets. In it, the speaker compares the end of the world’s problems to the closing of a knife. With the blade out of reach, the terrors of the world can’t impact anyone.

‘Patience Taught by Nature’ was published in 1845 in Browning’s collection of poems, A Drama of Exile: and other poems. In the poem, she speaks about another world, one that is not influenced by the mundane problems of humanity. There, where God resides, things are different.

‘Aurora Leigh’ is a long poem, stretching to the length of a novel. It includes nine books of text that go through the life of a character, Aurora, who is trying to become a poet. Browning details the roadblocks she encounters along the way. It is well regarded and by some considered to be the greatest long poem of the century.

Elizabeth Barrett Browning was born in Coxhoe Hall, Durham, England in March of 1806. Her family had been living in Jamaica for over one hundred years before she was born and had become quite wealthy. They were the owners of a number of large estates throughout northern Jamaica, as well as sugar plantations and workshops.

She was the first of twelve children born to Edward Barrett Moulton Barrett and Mary Graham Clarke. Her childhood was a pleasant one; she spent time riding horses and walking in the country. In the early 1800s, the family moved to Hope End in Ledbury, Herefordshire. It was here that her father built a Turkish inspired mansion for the family.

Browning was educated at home and began writing poetry at the age of four. She was an outgoing child, dedicated to her studies. During these early years, her family compiled her poems into a work titled, Poems by Elizabeth B. Barrett. It was also around this time that she began to deal with an illness that is still to this day unknown. She had intense headaches and spinal pain which degraded her mobility. The illness followed her for the rest of her life.

Browning’s mother died in 1828 and was soon followed by her grandmother. It was also during this time period that the abolition of slavery was causing the family to lose a great deal of wealth. They had to sell their home, Hope End, and Browning ended up living in Belle Vue in Sidmouth.

During the early 1840s, Browning wrote a great deal. She published the poem ‘The Cry of the Children’ in Blackwoods, a work that was focused on the condemnation of child labor. In 1844 she published two volumes of her work Poems, as well as two essays in The Athenaeum. She was a candidate for poet laureate alongside Tennyson in 1850 and was considered one of Britain’s best-loved and prolific poets.

Elizabeth Barrett Browning married Robert Browning in September of 1846. The two lived in Italy for the rest of Elizabeth’s life.

Browning’s health began to decline in the early 1860s. She had developed what might have been tuberculous ulceration of the lungs. Browning died in June of 1861.

Explore poetry by Elizabeth Barrett Browning below, analyzed by the team at Poem Analysis. 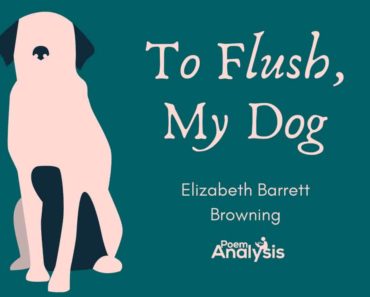