Sonnet 43: How do I love thee? by Elizabeth Barrett Browning

‘How Do I Love Thee? Let Me Count the Ways,’ or ‘Sonnet 43’ is one of Browning’s most famous poems. She is a renowned Victorian poet who managed to achieve acclaim in her lifetime. She went on to influence many British and American poets, particularly Emily Dickinson. A prolific writer, Elizabeth Barrett Browning’s poems came to the attention of another famous poet of the time, Robert Browning.

The two poets eventually married but were forced to wed secretly because of Barrett Browning’s father. He found out about the nuptials and disinherited his daughter. Barrett Browning and her husband moved to Italy, and both encouraged the other with their writings. She died in Italy at the age of 55. 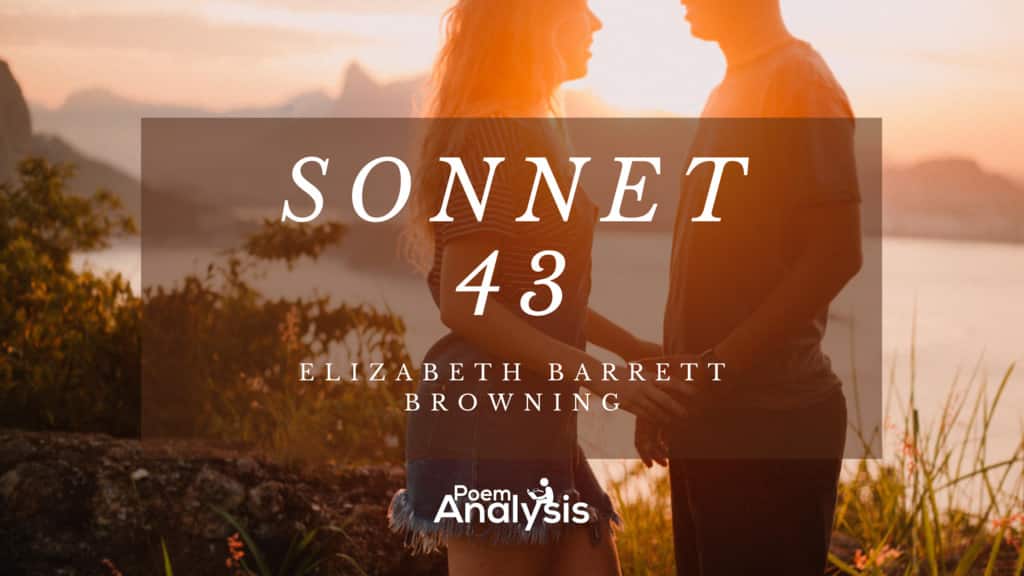 Sonnet 43′ by Elizabeth Barrett Browning describes the love that one speaker has for her husband. She confesses her ending passion.

It is easily one of the most famous and recognizable poems in the English language. In the poem, the speaker is proclaiming her unending passion for her beloved. She tells her lover just how deeply her love goes, and she also tells him how she loves him. She loves him with all of her beings, and she hopes God will grant her the ability to love him even after she has passed.

Browning engages with themes of love/devotion and relationships in ‘Sonnet 43’. From the first lines, it’s clear that this is going to be a love poem. She addresses her listener, likely her husband Robert Browning, and tells him that there are many reasons why she loves him and that she’s going to list them out. As the poem progresses the language becomes more figurative with the poet making various nature-based comparisons in order to depict her love accurately and movingly.

Death comes into the poem at the end as the speaker talks about the length and durability of their relationship. She hopes that God will allow her to love her partner even in death. It becomes clear at the end that her love is a spiritual one as much as it is a romantic one.

‘Sonnet 43’ is classified as a sonnet because it contains fourteen lines of poetry and has a fixed rhyme scheme of abba abba cdcdcd.  This is the traditional pattern of a Petrarchan sonnet, one of the two major sonnet forms. (The other is the Shakespearean sonnet which rhymes ABABCDCDEFEFGG).The poem also makes use of the usual metrical pattern associated with standard sonnet forms, that is, iambic pentameter. this means that each line contains five sets of two beats. The first of these is unstressed and the second is stressed.

In ‘Sonnet 43,’ Browning makes use of several literary devices. These include but are not limited to imagery, simile, and alliteration. The first of these is one of the most impactful literary devices that a poet can use. It can be seen through the poet’s ability to create images that appeal to or activate the reader’s sense. These are things that can be seen, touched, heard, or smelt in one’s mind. A good example comes from these lines “I love thee to the level of every day’s / Most quiet need, by sun and candle-light”.

There is a great example of a simile in this line: “I love thee freely, as men strive for right”. here, she compares the amount that she loves her partner to the strength with which men “strive” for what is right, or just.

Alliteration is an effective device that’s used to increase the overall rhythm and rhyme of a piece of poetry. For example, “purely” and “praise” in line eight.

One can assume, although it is not 100% certain, that Browning is also the speaker of the poem since it is well known just how deeply she and Robert Browning loved and cared for each other.  The speaker is talking directly to her beloved in the sonnet; she uses personal pronouns such as “I” and “you.”

Based on the initial line, it appears that the speaker has been asked a question prior to reciting Sonnet 43. The first line also serves as the motivation for the rest of the work.  Barrett Browning writes,

How do I love thee?  Let me count the ways.

She then uses the last thirteen lines of the poem to show just how much she loves her husband.

Lines 2-4 of Sonnet 43 provide the first way in which the speaker loves her husband.  Barrett Browning writes,

I love thee to the depth and breadth and height

My soul can reach, when feeling out of sight

For the ends of being and ideal grace.

Here she is describing that her love is as deep and wide and tall as it can possibly be.  It is so deep and wide and tall, in fact, that she cannot even “see” the edges of it: it is infinite. Barrett Browning uses consonance in line two in order to convey just how much she loves her husband.  The repetition of the “th” sound gives the line movement, which signifies that her love for him is ongoing.

In the next two lines, Barrett Browning continues to show her husband how much she loves him.  She writes,

I love thee to the level of every day’s

Most quiet need, by sun and candle-light.

These lines are particularly lovely in their simplicity.  While her love knows no bounds, the speaker also loves her beloved in ordinary, everyday life.  She needs him as much as she needs other basic necessities of life.

In lines seven and eight, Barrett Browning writes of two other ways she loves.  She writes,

I love thee freely, as men strive for right.

I love thee purely, as they turn from praise.

These lines of Sonnet 43 give an innate sense of feeling to her love.  Just as men naturally strive to do what is good and right, she freely loves.  In addition, she loves him purely, just as men turn from praise in order to maintain humility.  The speaker does not want thanks or attention for her love; just like good and just men, she loves because it is what she has to do.  Using these two similes in these two lines strengthens the tone of love and adoration in the poem.

Barrett Browning continues with the pattern of showing how much she loves her husband.  She writes,

I love thee with the passion put to use

In my old griefs, and with my childhood’s faith.

Barrett Browning’s diction here is interesting, particularly because she is taking the feelings she has about something relatively negative and comparing it to the feelings she has for her husband.  Old griefs can be defines as anything that a person passionately despises.  She is telling her husband here that she has as much passion for him as she does for those things in life that she just cannot stand.  She also loves him with the faith of a child, which is a particularly lovely line.  Children’s faith is usually steadfast and true.  Just like a child has faith, so, too, does the speaker have love for her husband.

Barrett Browning continues with this religious motif in the next lines.  She writes,

I love thee with a love I seemed to lose

With my lost saints.  I love thee with the breath,

Smiles, tears, of all my life…

Her “lost saints” is a reference to all of those people she once loved and adored in her life.  The love she once felt for them, that she eventually lost, has now been transferred into the love she feels for her husband.  Additionally, she loves him with all that she is: her breath, her smiles, and her tears.  Barrett Browning confesses that she loves her husband with all that has made up her life.

Barrett Browning ends her poem by acknowledging that she is willing to love her husband forever if God chooses to allow her to do so.  She writes,

…and, if God choose,

I shall but love thee better after death.

Not only will she love him well into eternity, she writes, but she will also love him even better than she does presently.  Her love will continue to grow with the passing of time, regardless of whether or not she or he is still alive.  The speaker’s love for her husband is so strong that not even death could destroy it.

Elizabeth Barrett Browning fell in love with Robert Browning after he reached out to her about her writing.  The couple wrote letters back and forth to each other before finally marrying, knowing full well that the marriage would not be accepted by Barrett Browning’s father.  Their marriage was not only one filled with love but also respect for each other’s writings.  The two were each other’s biggest supporters, and so it is no surprise that Barrett Browning would include this sonnet in her collection titled Sonnets From the Portuguese, so titled because Robert Browning often referred to his wife as his little Portuguese.

Readers should also seek out Browning’s other love poems, such as ‘Sonnet 29’ and ‘Sonnet 14’. Her husband, Robert Browning, also wrote some interesting love poems. These include ‘Love in a Life’ and ‘Parting at Morning’.  Other poems that are related to Browning’s ‘Sonnet 43,’ include ‘I Said to Love’ by Thomas Hardy, ‘Love Poem’ by Elizabeth Jennings, and ‘The Definition of Love’ by Andrew Marvell.

Home » Elizabeth Barrett Browning » Sonnet 43: How do I love thee?

Jamie joined the Poem Analysis team back in November, 2010. He has a passion for poetry and enjoys analysing and providing interpretations for poetry from the past and present.
Subscribe
4 Comments
Newest
Oldest Most Voted
Inline Feedbacks
View all comments