Elizabeth Drew Barstow Stoddard was born in Mattapoisett, Massachusetts in May of 1823. Her hometown was a small fishing village on the shore of Buzzards Bay. It would serve as the backdrop to many of her best works and inspire the lives of her most realistic characters. Her father was an independent businessman who managed to maintain the family’s affluence although a number of his ventures failed. This was no small thing as Stoddard was the second of nine children. 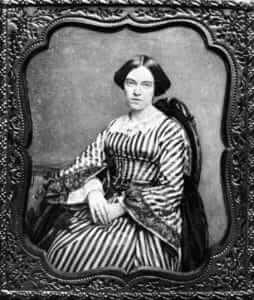 As a young woman, she attended Wheaton Female Seminary in 1837 for a short period of time, and then returned again in the early 1840s. After her tenure at the seminary, she traveled around New England and out to New York City. It was in New York that she became engaged to and married, Richard Stoddard in 1851. She was twenty-eight years old.

Richard was also an inspiring writer and the couple lived in New York City on a very limited budget. The couple was deeply ingrained in New York’s literary and artistic circles. They often held meetings for aspiring artists within their homes.

Throughout Richard and Elizabeth’s relationship, Elizabeth had three children, only one of whom lived into adulthood. The other two dying while they were still infants. It was in the mid-fifties that Stoddard began to submit her own work, including poetry, fiction, and commentary of social issues, to various literary journals. Her writing appeared in publications such as The Aldine, Harper’s Bazaar, and The Atlantic Monthly.

It was also during this time period that she contributed a bi-monthly column to the newspaper, Daily Alta California, in San Francisco, CA. She wrote on the trends of the New York cultural scene and showed a certain amount of disdain for the world she was living in. She often spoke on religion and a variety of other topics such as manifest destiny.

It was in the 1860s that she first began writing her novels. Her best-known work, The Morgesons, was published in 1862. It was followed by Two Men, and Temple House. While these works were praised by critics, they did not bring the writer any financial gain. Stoddard’s poetry was published in the 1895 collection, Poems. It frequently touched on the issues associated with domesticity. Stoddard never managed to find the audience she was looking for before she died in August of 1902 of an unknown illness.