Ella Wheeler Wilcox was born in November of 1850 in Johnstown, Wisconsin. After the failure of his business, Wilcox’s father moved the family to the north of Madison. She was the youngest of four children and is known to have been an avid reader from a young age. Popular writers such as Mary Jane Holmes, were of particular interest to her. Literary pursuits were encouraged in her family, who considered themselves to be intellectuals. They spent a great deal of time making sure their children were well-read and capable writers. 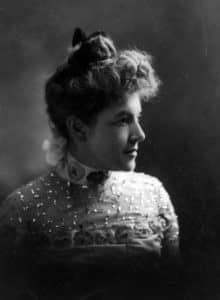 Wilcox’s own abilities first began to pay off when around the age of fourteen she had her first poem published. It appeared in the New York Mercury. All of her early work (she began writing poetry at the age of eight) from those years has been lost.  By the time she graduated from high school, she was well-known throughout the community for her skill as a poet. It was around this time that her poems also began to appear in Waverly Magazine and Leslie’s Weekly.

From 1867-68 she attended the University of Wisconsin. This was the only period in her life that she was not completely devoted to writing. Her first book would appear four years later. It was titled, Drops of Water. The poems included in this volume were mainly of a religious and moral nature. She followed with another collection in 1873, titled Maurine. This work was considered to be highly sentimental.

Wilcox’s third collection was rejected by her chosen publisher. It was deemed to be immoral, a fact which allowed for its success when another publishing house picked it up in 1883. It was eventually released under the title of Poems of Passion. This collection was the one that establishes Wilcox’s reputation. One year later she married businessman, Robert M. Wilcox. Her new relationship did not interfere with her production as a poet. She wrote prolifically throughout the late 1890s and into the early 1900s.

Some of the collections which followed were, Men, Women, and Emotions in 1893, Poems of Sentiment in 1906, and World Voices in 1918. In addition to verse, Wilcox wrote fiction. These included two autobiographies one published in 1905 and another in 1918 shortly before her death. She also wrote A Double Life in 1890 and A Woman of the World in 1904.

Wilcox’s husband died in 1916 and she spent the remaining years of her life touring Allied camps in France, lecturing, and reading her poetry. She died in October of 1919.