My Mother’s Music by Emilie Buchwald

My Mother’s Music by Emilie Buchwald is a dedication to childhood happiness, touching on nostalgia for the inability to return to that bliss. It uses the extended metaphor of her mother’s ‘music’ being represented through the semantics of water, engaging with the beautiful flow of nature. By combing the joyous insinuation of ‘music’ with the beauty of water’s ‘rippling stream’, Buchwald emphasizes the happiness of her childhood. 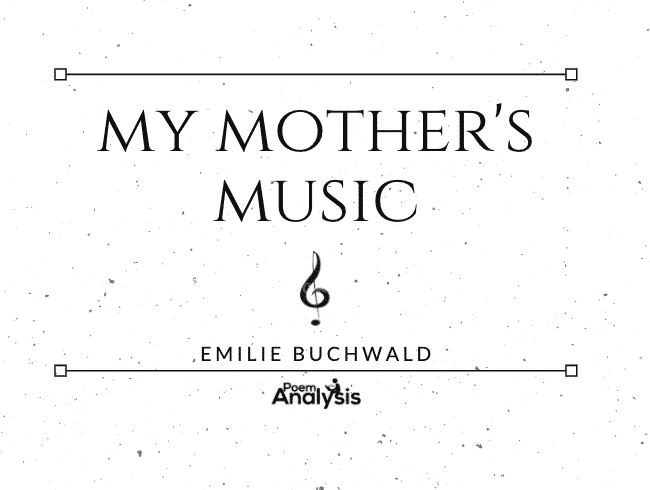 My Mother’s Music by Emilie Buchwald begins by focusing on ‘my childhood’, a flashback to the past in which Buchwald would listen to her mother playing the piano as she drifted off to sleep. There was a moment of melancholy in that time, Buchward knowing, but not understanding, that these moments were not going to last forever. Music is portrayed through a harmonious flow, the ‘rippling stream’ often being connected to ‘sunlight’ to compound a sense of the childhood serenity Buchwald experiences. The final stanza focuses on the times in which the poet rose from her bed, creeping to the piano to watch her mother playing her music on the piano. It is a joyful poem, with a touch of nostalgia, Buchwald knowing these moments will never be recovered.

Buchwald splits My Mother’s Music into four stanzas of unequal lengths. The first stanza measures four lines, the second six, the third 5, and the final 7. The changing structure could represent Buchwald’s engagement with memory, the subjectivity of exploring the past causing the disruptive nature of the poems. There is a balance of enjambment and end stops within the poems, the changing metrical structure reflecting the dreamlike state of the poet, the flow of each line moving much like the ‘tide’ of ‘music’.

The most prominent technique within the poem is the use of water semantics in describing her ‘Mother’s music’. Indeed, throughout the poem, the mother’s song is described as ‘washed’, ‘rippling stream/of clear water’, ‘tide, her arms rowing the music.’, the flow of water reflecting the harmonious sound of the music. There is also something incredibly calming about water, with that insinuation also being coupled with her mother’s music, suggesting it brought her tranquility in her ‘childhood’ days.

Another technique that Buchwald uses when writing My Mother’s Music is enjambment. By having no end stop on a line, Buchwald allows the poem to flow from one line to another. This, even in the word ‘flow’, echoes the water semantics that the poet is using, furthering this depiction of the music by having the structure of the poem exude a sense of freedom.

In the evenings of my childhood,

my door open to a slice of light.

The poem begins by focusing on ‘the evenings of my childhood’, discussing Buchwald’s youth and therefore entering into memory. Within this initial description, two things are revealed. The first, within the use of ‘evening’, is a sense of calm. There is a certain tranquility that the word ‘evening’ contains that ‘night’ does not have, ‘night’ often being connected with evil. Therefore, by setting the poem is this atmosphere of ‘evening’, Buchwald allows the serenity of the poem to become the main focus, right from the first line. ‘Childhood’ similarly mirrors this sense of calm, the early days of life often being idolized as a period of incredible happiness and tranquility. Indeed, for Buchwald, her ‘childhood’ of listening to her mother play the piano while falling asleep was something comforting.

It is within the first stanza that Buchwald begins to employ the semantics of the ocean. The ‘music’ is presented as ‘wash[ing]’ into her ‘room’, flooding the air in peaceful harmony. Even Buchwald’s ‘room’ is transformed into a ‘cove’, ready to receive the oncoming flow of music.

The joyous atmosphere is furthered by the use of ‘slice of light’, the associations with ‘light’ connecting this memory with a tinge of happiness, ‘light’ being a metaphor for joy in this moment of the poem. The ‘open’ state of the ‘door’ could also reflect the idea that Buchwald is accepting of the music, ready for it to enter into her room.

I felt a melancholy I couldn’t have named,

This stanza has a hint of ‘melancholy’, one that the ‘childhood’ Buchwald ‘couldn’t yet have said or understood’. There is something about these early happy memories that make Buchwald slightly upset. One could argue that it is simply the music from the piano, a piano often being associated with very slow and moving pieces of music. Yet, the ‘longing’ and ‘sadness’ that Buchwald describes could also be nostalgia for the past. Now in the present moment, when the poet looks back to this happy moment in her childhood, she gets a pang of loss, knowing she can never return to those halcyon days. Indeed, the reference to ‘untouched by time’ insinuates that this moment is destroyed by the progression of time, with Buchwald growing up and leaving the tranquility of childhood.

Within this stanza, Buchwald returns to the joyous immersion in memory. She ignites a sense of tranquility through her reference to the semantics of water, ‘rippling stream’ especially demonstrating a sense of freedom and harmony. The clarity of the water, described as ‘clear’ allows for a ‘bed of river stones’ to be revealed, the purity of Buchwald’s metaphor flourishing in beautiful images. The final depiction of the ‘stones caught in sunlight’ suggests, in line with the first stanza, an overwhelming sense of happiness. Sunlight is often a metaphor for joy, here being no different.

out of the piano.

The final stanza contains the first element of movement within the poem which is not connected to the music. Buchwald depicts her childhood self slipping from her bed, ‘crept… to watch her’, drawing closer to the source of the beautiful music. Buchwald suggests that her mother becomes a part of the music she is playing, or perhaps that the music she is playing represents the spirt of her mother. Indeed, both music and mother are presented through the semantics of the ocean, the poet’s mother being ‘overtaken by the tide’, forming a part of the extended metaphor.

Buchwald’s mother becomes the music, ‘her arms rowing the music/out of the piano’, the two sources of joy – mother and music – fusing into one. The final image is this connection, the source of childhood happiness stemming from this small scene of Buchwald watching her mother play beautiful music from the piano.