Simplicity (How happy is the little Stone)

In ‘How happy is the little Stone, ’ Dickinson personifies a stone. She describes its rambling adventures, evoking joy and whimsy in the reader. The poem speaks on the crucial concept of happiness, where the speaker emphasizes how heavy the world can seem at times. 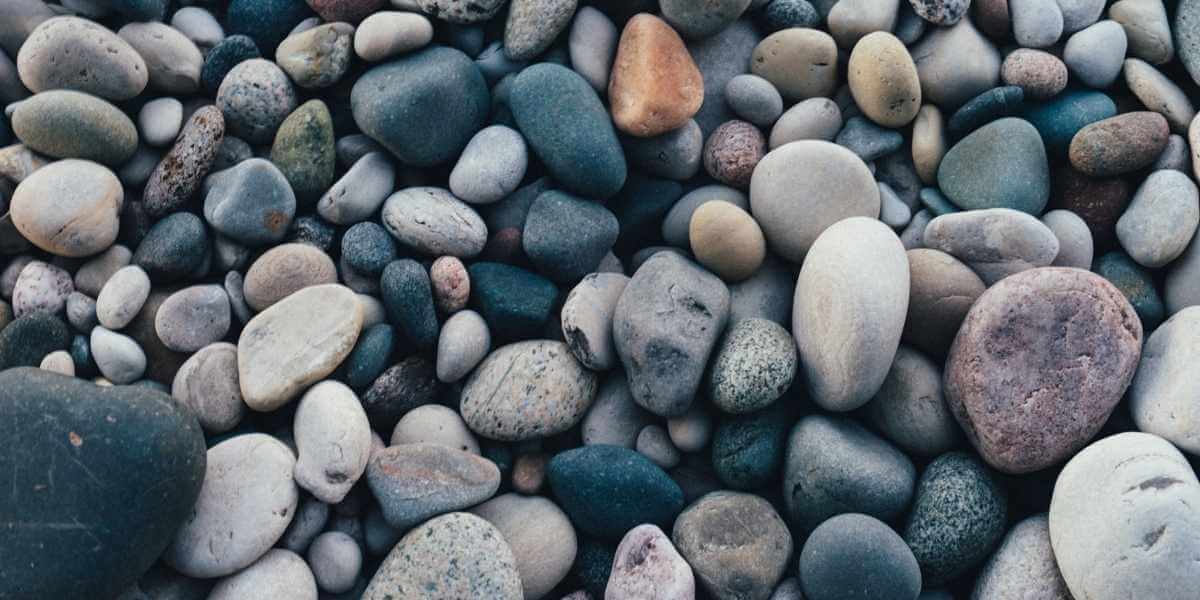 Dickinson reminds readers of how the simplest lives are usually the happiest.

In ‘How happy is the little Stone,’ also known as ‘Simplicity,’ the speaker addresses themes of happiness, peace, and the purpose of life. A representative stone stands as a symbol of ideal happiness and a perfectly aligned life devoid of stressors.

‘Simplicity’ or ‘How happy is the little Stone,’ tells the story of a “stone” as a means of explaining the basic concept that “simplicity” in life can be the key to a “happy” existence. Rather than being weighed down by too many “care[s]” and “fears,” to Dickinson, we should enjoy what life grants us and find contentment in what surrounds us. In this basic tale and in only ten lines, this theme is solidified.

Explore How happy is the little Stone

‘How happy is the little Stone’ by Emily Dickinson is a short, charming poem that depicts happiness through the image of a rambling stone.

The poem dives into the simple life and nature of a single stone that rambles along the road by itself. It does not worry over human diversions and instead indulges in simple, peaceful pleasures. The stone allows itself to exist in the universe without complication.

‘How happy is the little Stone’ by Emily Dickinson is a ten-line poem that is contained within a single stanza of text. The lines are all short and make use of Dickinson’s characteristic capitalization and dashes. Dickinson also makes use of a very consistent rhyme scheme following the pattern of AABBCC, and so on, changing end sounds as the poem progresses.

Scholars are divided over what Dickinson’s use of this intermittent punctuation could mean. But in this case, the dashes are easily read as moments in which the speaker contemplated the major themes of the poem, peace, and simplicity. The pauses usually represent a desire to create drama and tension in the text. It is also a way for the reader, speaker, and even Dickinson herself, to gather thoughts together before moving on to the next line. There are many fewer pauses in this particular poem than there are n others, this contributes to the smoother, less tense feeling of the text.

One should also consider the use of capitalization in these lines. This is another technique that Dickinson is known for and which causes confusion among students and scholars alike. There is no single definitive reason why Dickinson capitalized the words she did. Often, the words she chose were the most prominent of the lines, the ones that were the most evocative and meaningful. This appears to be the case in ‘How happy is the little Stone’.

Dickinson uses several poetic techniques in ‘How happy is the little Stone’. These include alliteration, half rhyme, enjambment, and anaphora. The latter, anaphora, is the repetition of a word or phrase at the beginning of multiple lines, usually in succession. For example, lines three, four, and seven all begin with “And”.

Alliteration occurs when words are used in succession, or at least appear close together, and begin with the same letter. For instance, “rambles” and “Road” in line two, and “A,” “And,” and “Associates” in lines six, seven, and eight.

Half rhyme, also known as slant or partial rhyme,  is seen through the repetition of assonance or consonance. This means that either a vowel or consonant sound is reused within one line or multiple lines of verse. Examples include “care” and “Careers” in line three and “Exigencies” and “simplicity.”

Another important technique commonly used in poetry is enjambment. It occurs when a line is cut off before its natural stopping point. Enjambment forces a reader down to the next line and the next, quickly. One has to move forward in order to comfortably resolve a phrase or sentence. There are a few examples in this poem, including the transitions between lines one and two and five and six.

How happy is the little Stone
That rambles in the Road alone,
And doesn’t care about Careers
And Exigencies never fears—

In the first lines of ‘How happy is the little Stone,’ the speaker begins by using the line that later came to be used as the title. She notes how “happy,” a very human emotion, a little stone in the road, seems to her. This use of personification is important as it is continued throughout the poem. She imbues the stone with human characteristics and uses it as a representative symbol of an unworried, peaceful life.

While using alliteration, the speaker addresses the stone’s technique of rambling, without a destination, around the “Road alone.” It is independent and satisfied in its lack of direction. It doesn’t “care,” she adds, about a career, nor does it “fear” a sudden demand or emergency.

To create a sense of “simplicity,” Dickinson focuses on a “little stone” that is “in the road.” This tiny object “rambles,” which indicates that it has no specific plans or destination in mind. This concept makes sense, given that it is noted for having no “care about careers” and “never fears” “exigencies.” The situation makes it feel as though this “little stone” has no purpose or path, but still, he is “happy” despite being “little” and “alone.”

By description, this “stone” does not seem to have very much to its advantage. Remember that it is “little”—a statement that indicates smallness in comparison to the world around it—and it has no company. There is no physical reason, in these respects, as to why this “little stone” would be “happy,” and this entails that the reason for his joy is, in fact, that he is free of “care” and “fear.”

An interesting thing at work within these lines is the personification. Essentially, the “stone” is treated like a person in that he is labeled with human emotions, and the ideas from which he has freedom are very human traits. A “stone,” after all, has no logical connection to a “career” any more than he would logically be labeled “happy.” This becomes interesting in that it is, contrastingly, the lack of humanity that seems to be the cause of his joy in that his lack of “care about careers” and “fears” about “exigencies” are labeled as the reasons for his merriment. He is being treated like a human, but his lack of human traits is what makes him “happy” in comparison to humans.

This is the rationale behind using this complex strategy in the end. Dickinson wishes to show that these human-based burdens can strip away our “happ[iness],” so it seems reasonable to address them in human concepts that relate to us. To draw the most striking example of this “simplicity,” however, requires something that is not alive since anything that is alive would have needs and often “fears.” In essence, this strategy has allowed Dickinson to show these burdens by juxtaposition by placing them with something inanimate while grounding them in human concepts to keep the theme reflective of the human situation.

Whose Coat of elemental Brown
A passing Universe put on,
And independent as the Sun
Associates or glows alone,
Fulfilling absolute Decree
In casual simplicity—

This second stanza continues with this paradox of human-related concepts being placed on a very inanimate “stone.” Specifically, he is noted to wear a “coat of elemental brown.” Clearly, a “stone” would not wear a “coat,” but this speaks of the coloring about him, maybe provided by a muddy “road” or a discolored plant that has found place on the “stone.” While this might seem bizarre, it notes that the “stone” did not have to worry about clothing since the “passing universe” provided it. This showcases, in part, why a “career” and “fear” are not a part of the “stone[‘s]” mentality because he is being given things that he does not know he needs. He is provided for without worry, and this “casual simplicity” creates a life of calm that humans who must strive for things may never know.

Another irony at work is that this “stone” is noted as “independent as the sun,” though there is nothing fully “independent” in a person always having things handed to them. More accurate, as it happens, is the concept of the “sun” in this scenario since the “universe” seems to cater to this “stone” as if it were the central being to linger near and tend to. This “stone,” basically, is the center of this “universe,” possibly because his situation is so “simpl[e].”

It is in this “simplicity,” however that we can uncover rationality behind bringing up the concept of “independen[ce]” in regard to this “stone”—not because he gets everything for himself, but because he is “independent” from the needs themselves. He can continue in his existence without things that a living being would need, meaning that even if he is given a “coat” and other details, he needs none of it. Rather, he is “independent” of such things.

Furthermore, this “stone” is “independent” from human struggles. He does not have to worry over “careers” and such because he has no need for them. In this, he has a freedom that a human might not fully grasp. In fact, he is free from purpose as well since through this “independent[ce],” he finds “happ[iness]” by “[f]ulfilling absolute decree.” What this entails is that his existence does not require very much contribution, and by just being, he is “[f]ulfilling” his purpose, or “decree.”

This is the definition of a “simpl[e]” life, and to Dickinson, this is a thing worth envying. To live a life without “fear” or “care” seems intriguing, but clearly, the reader cannot go to the extreme that the “stone” has accomplished. Still, there is a moral that a reader can take from the poem, and that moral is the theme of the poem. If we want to be “happy,” we should strive for “simplicity” where we do not let “care” and “fear” consume us. We should strive for something more “casual” and “elemental,” and in that “simplicity,” our burdens can be smaller to allow us more content existences.

Emily Dickinson was born in Massachusetts in 1830. She attended Mount Holyoke Female Seminary and Amherst Academy, and she was a feminist in terms of the society in which she lived, a concept that can be seen in her works that speak of her criticisms of marriage. She passed away in 1886 in her hometown of Amherst. Read more poems by Emily Dickinson.

Home » Emily Dickinson » How happy is the little Stone