The Mushroom is the Elf of Plants-

‘The Mushroom is the Elf of Plants-’ by Emily Dickinson depicts the mushroom, its fleeting life, and personifies it alongside Nature. 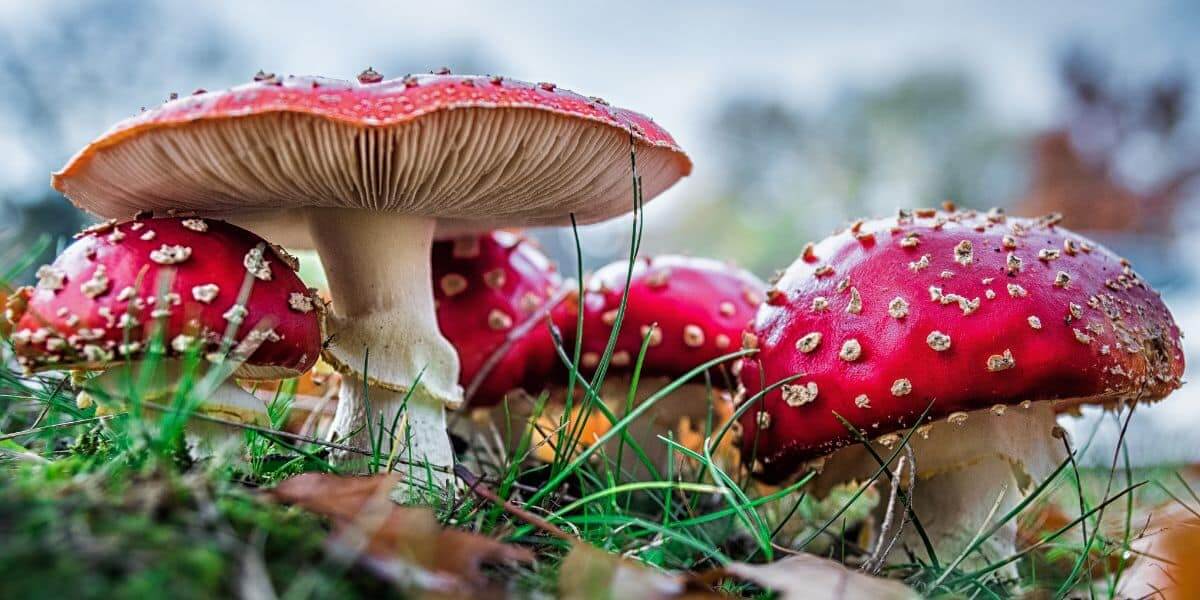 Speaker: Someone who appreciates nature

Dickinson illuminates the incredible lives of mushrooms in a way that helps readers envision them as mischievous, magical creatures.

This thoughtful and amusing nature poem is written in Dickinson’s characteristic style. She uses ballad meter, seemingly random capitalization, and her classic dashes that end many lines and create pauses in the middle of others. ‘The Mushroom is the Elf of Plants’ is not the easiest poem to analyze due to Dickinson’s use of numerous metaphors.

Explore The Mushrom is the Elk of Plants

‘The Mushroom is the Elf of Plants-’ by Emily Dickinson is a short poem in which Dickinson describes a mushroom’s features.

In the first lines, the poet uses a series of metaphors to compare the mushroom to an elf and emphasize how short its life is. Its “whole career” is shorter than the time it takes a snake to strike at its prey. She goes on to describe how she feels the grass is pleased to have it grow within its midst for a short period of time and that if Nature had a face or a form, the mushroom would be her only apostate.

The meaning of this poem is that mushrooms are unique plants that live where they please. But, they only do so for a short period, so they have to be appreciated quickly. Dickinson’s speaker enjoys the way they sprout up quickly and then disappear overnight.

The main theme of this poem is nature and the various ways that living things exist. The poet focuses on the unique life of the mushroom and how fast and unusual it lives. It grows in unique places and would be if nature had a face and opinion, “Nature’s” only “apostate.”

‘The Mushroom is the Elf of Plants-’ by Emily Dickinson is a five-stanza poem that is divided into sets of four lines, known as quatrains. These quatrains follow a rhyme scheme of ABCB, with a few examples of half-rhyme. The poet also chose to use alternating lines of iambic tetrameter and iambic trimeter.

This means that the odd-numbered lines contain a total of eight syllables which can be divided into four sets of two. Within these sets, the first syllable is stressed, and the second is unstressed.

The even-numbered lines, where the poet uses iambic trimeter, follow the same syllable arrangement but contain a total of six syllables.

Both elements of Dickinson’s structure, the rhyme scheme, and meter are the traditional elements needed for ballad meter or hymn meter.

The Mushroom is the Elf of Plants –

At Evening, it is not

At Morning, in a Truffled Hut

It stop opon a Spot

In the first stanza of the poem, the poet uses a metaphor to compare the “mushroom” to an elf. She is thinking about the mysterious-seeming way that the mushroom is not visible in the evening, in some cases, but in the morning may seem to appear out of nowhere.

Dickinson was also thinking about the mushroom cap, which gives some types of fungi a hat-like appearance.

As if it tarried always

And yet it’s whole Career

Is shorter than a Snake’s Delay –

And fleeter than a Tare –

The speaker goes on in the second stanza to say that the mushroom’s life feels as though it is always lagging behind. Or “tarried always.” But, this isn’t the case.

The speaker emphasizes that its “whole Career,” or whole life, is shorter than a “Snake’s Delay.” This is a very creative metaphor that compares a mushroom’s brief life to the brief period of time that a snake waits before striking at its prey.

There is another metaphor at the end of the stanza in which the poet further emphasizes the brevity of the mushroom’s life by comparing it to the brief period of time it takes a particular weed to take over a field. She is bringing the reader’s attention to be interesting attributes the mushroom demonstrates and how one has to appreciate them while they can, as mushrooms live only for a very short period of time.

The Germ of Alibi –

The mushroom is unusual, the speaker adds. It “Juggle[s]” vegetation and is the “Germ of Alibi.” These obscure lines are another way of describing the changing nature of mushrooms. They grow in one place, disappear, and then grow in the next. They are always somewhere else.

In the third and fourth lines of the third stanza, the poet uses two similes. Here, she describes the mushroom as bubbling up before things happen and then quickly disappearing. It is a sign of what has occurred in the past and what’s going to happen in the future. The fleeting nature of its life is generally mysterious.

I feel as if the Grass was pleased

To have it intermit –

For the first time, in the fourth stanza, the poet uses the first-person pronoun “I.” The speaker also uses personification to describe how she thinks that the grass was “pleased” to have mushrooms popping up in its midst and interrupting its growth for a brief period of time.

With several examples of alliteration, personification, and metaphor, the poet describes the mushroom as secretive, or “surreptitious,” and a “scion” or growing plant. The latter term can also be used to describe someone who has descended from a wealthy family.

Had Nature any supple Face

Or could she one contemn –

Had Nature an Apostate –

That Mushroom – it is Him!

The mushroom, in accordance with Dickinson’s allusion to its grandeur (through the use of the word “scion”), is the only thing, the poet concludes, that might “reject” personified Nature. They would be nature’s only “apostate.”

The mushroom, Dickinson concludes, has a strong personality and a fleeting life which means it is very hard to control or predict. These are things that the poet does not condemn, but suggests are its best features.

What is ‘The Mushroom is the Elf of Plants’ about?

The poem is about mushrooms, how they grow, how long they live, and the way they interact with other elements of the natural world.

What is the theme of ‘The Mushroom is the Elf of Plants-?’

The theme is nature, specifically the way that some elements of nature, like the mushroom, live fleeting lives. Mushrooms are also known for growing in surprising, different places. This inspired Dickinson to describe them as “surreptitious scions.”

What is the purpose of ‘The Mushroom is the Elf of Plants-?’

The purpose is to creatively explore a mushroom’s life and the way that it interacts with other natural elements. The poet uses creative, figurative language in order to imbue mushrooms with personality and intent.

What figurative language does Dickinson use in ‘The Mushroom is the Elf of Plants-?’

Throughout this poem, Dickinson makes use of a wide variety of figurative language. There are many examples of metaphors, a few similes, and nearly consistent use of personification.

What is the tone of ‘The Mushroom is the Elf of Plants-?’

The tone is appreciative and amazed. The speaker has a clear admiration for mushrooms and shows it through her repetitive use of metaphors and similes. She appreciates how fleeting their lives are and how they appear to live.

Home » Emily Dickinson » The Mushroom is the Elf of Plants-