‘There came a Wind like a Bugle –’ by Emily Dickinson depicts the incredible power of the natural world. She describes a day when a storm nearly destroyed a series of homes. 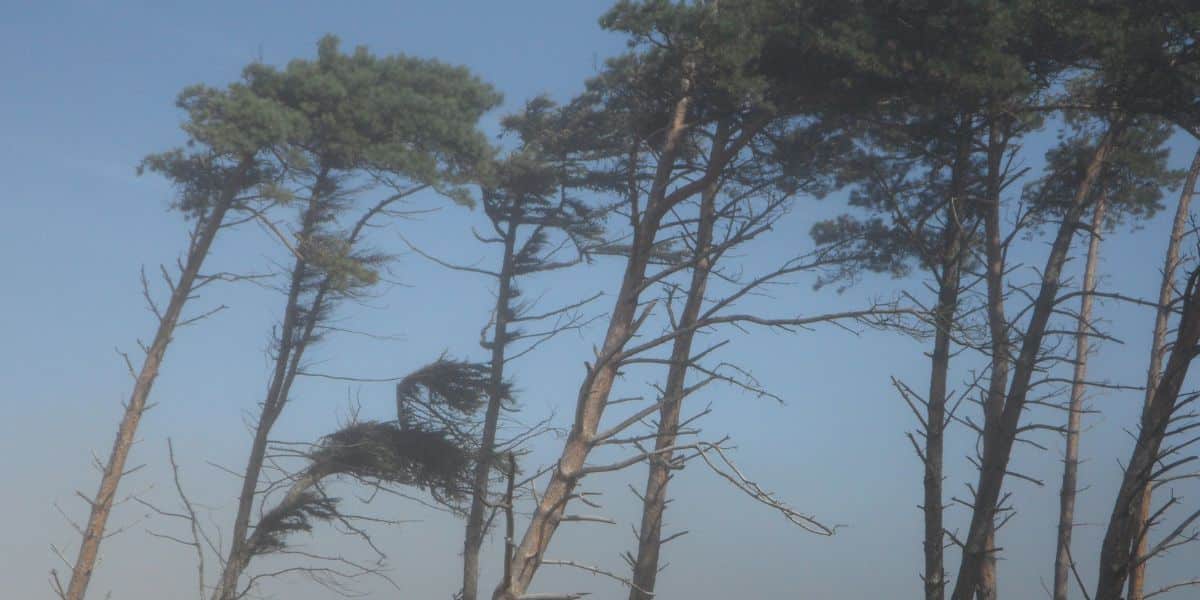 There is nothing more powerful than nature, Dickinson reminds readers in this poem.

‘There came a Wind like a Bugle’ is an easy-to-read poem that depicts a terrifying storm. It can be found in Poems published posthumously in 1891, along with all of her best-known literary works.

‘There came a Wind like a Bugle –’ by Emily Dickinson is a poem about the power of nature and the effects, or lack thereof, of change.

The poem begins with the speaker describing the wind blowing like a trumpet. She describes everyone closing the windows and doors and the rain pouring down, making a dangerous sound that suggests the end of the world. The poet uses personification to describe the trees and fence outside and how old the river swallowed up where houses used to be.

The poem ends with a question. The speaker is amazed at the way that change can come and have less of an impact on the world at large than it seems like it would.

The meaning is that nature is all-powerful and that the change it can affect (and that other sources of power can change) is limited to the area it touches. For example, the storm destroyed one small town, according to the speaker. But for most of the world, life went on like usual that day, and the “Day” was not seared into other people’s memories as it was those present in Dickinson’s poem.

‘There came a Wind like a Bugle –’ by Emily Dickinson is a seventeen-line poem that is written in block form. This means that the lines are contained in one long stanza. The poet utilized ballad meter and a ballad rhyme scheme in this piece. This means that the lines rhyme in a pattern of ABCB, and the meter is alternating lines of iambic tetrameter and iambic trimeter.

This means that the odd-numbered lines, like line one, which reads “There came a wind like a bugle;” contains a total of eight syllables which can be divided into four sets of two. Within these sets, the first syllable is stressed, and the second is unstressed.

The even-numbered lines, like line two, which reads “It quivered through the grass,” follow the same syllable arrangement but contain a total of six syllables.

It quivered through the grass,

And a green chill upon the heat

So ominous did pass

We barred the windows and the doors

As from an emerald ghost;

In the first lines of the poem, the speaker begins with a simile. She compares the wind to a “bugle” or a horn that blew and made the grass “quiver.” The poet uses examples of personification in these lines to imbue non-human elements of the natural world with human characteristics.

The poet uses another smile to compare the frantic movements of the people around her speaker to how they would act if they were trying to keep “an emerald ghost” out of their homes. This is a reference to the “green chill” from the previous lines that came over the world (a reference to the darker powers of nature).

On a strange mob of panting trees,

And fences fled away,

And rivers where the houses ran

Those looked that lived—that Day—

In the next lines, the poet describes how the rain came as soon as everyone got inside. The huge storm came, destroying homes in the process. Homes and fences were washed away when the river flooded, and the trees seemed to “pant” or gasp for breath.

The storm destroyed the town, and everyone remembers “that Day.” By capitalizing the word, the poet lends it special significance. It’s a day that everyone is going to remember for the rest of their lives.

The bell within the steeple wild

How much can come

And much can go,

And yet abide the world!

The next two lines use anaphora and describe how the storm caused the church bells to ring wildly as though to share the news that the storm had come and was wreaking havoc on the town. It was a huge event, one that seems (from these first lines) as though it would be life-altering.

But, the final three lines suggest (again with an example of anaphora) that change, and a storm like this, can come and go, and the rest of the world remains the same. These specific people had their lives changed, but the rest of the world went about life similarly. It’s amazing to the speaker how this can possibly be the case.

What is ‘There came a Wind like a Bugle’ about?

The poem is about an immense storm that tore through a town and destroyed it. Everyone who was there is never going to forget that “Day,” but the change that affected them did nothing to change the life experiences of people around the world (something that amazes the speaker).

What is one of the dominant themes in ‘There came a Wind like a Bugle?’

One dominant theme from ‘There came a Wind like a Bugle’ is the power of nature. This theme, along with change or transformation, is the basis for the poem.

What is the message of ‘There came a Wind like a Bugle?’

The message is that while change can feel life-threatening and completely overwhelming in one part of the world, the rest of the world goes on with life in the same way. The poet also wants to convey the immense power of the natural world in the lines of the poem.

What is the tone of There came a Wind like a Bugle?’

The tone is one of amazement and horror. The speaker describes in clear, terrifying detail the way that a storm ripped through a town, flooded the rivers, and destroyed homes. She’s amazed by what nature is capable of and how change can be so effective in one small part of the world.

Why did Dickinson write ‘There came a Wind like a Bugle?’

Dickinson likely wrote this poem in order to express her appreciation of, and amazement at, the power of nature. Whether or not the events in the poem are based on a real-life occurrence is unknown.

Readers who enjoyed this poem should also consider reading some of other Emily Dickinson poems. For example:

Home » Emily Dickinson » There came a Wind like a Bugle