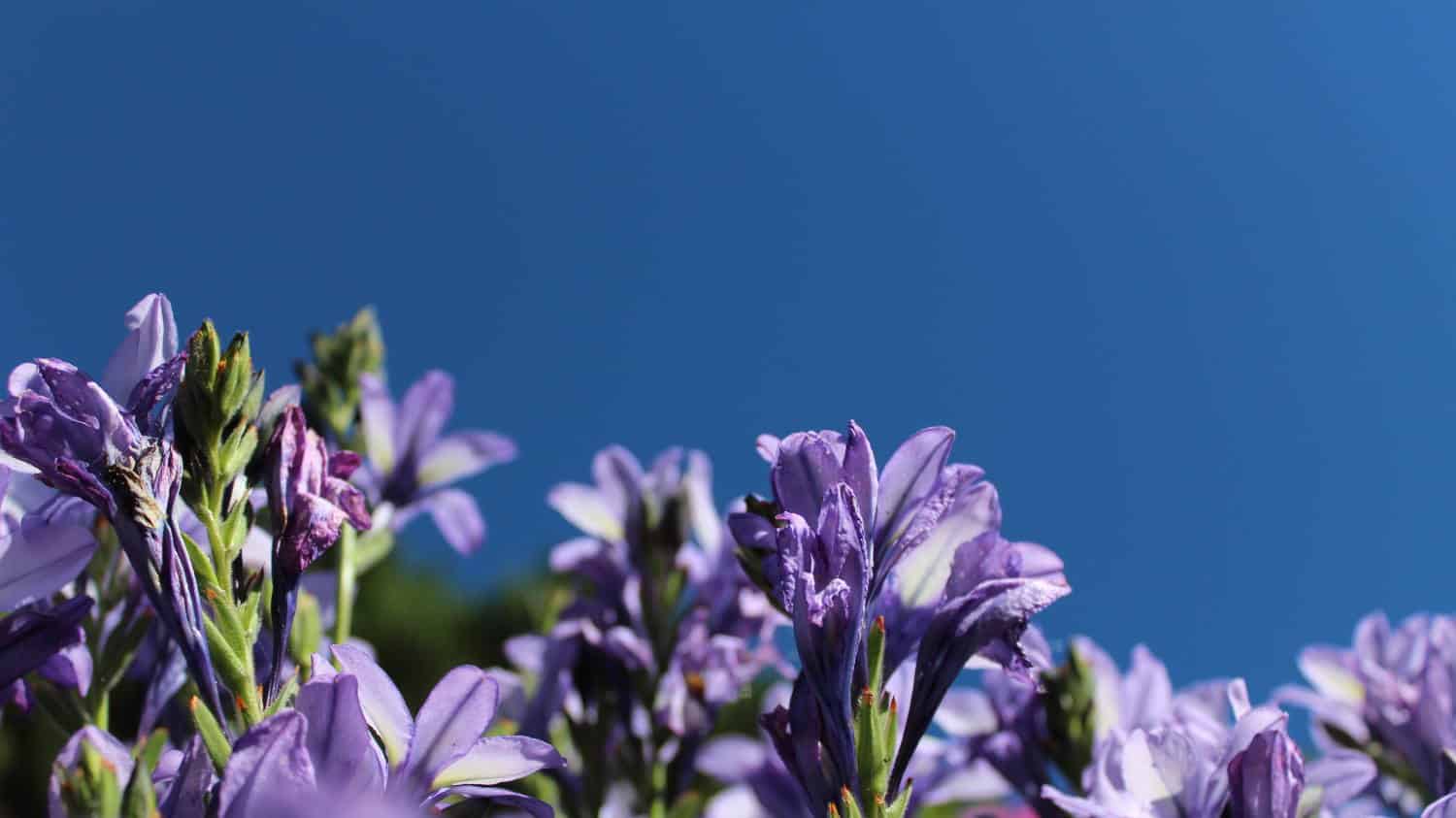 ‘There is another sky’ uses aspects of Shakespearean and Petrarchan sonnets in order to craft an original sonnet form that does not conform strictly to either pattern. It was one of her earlier poems. Through this poem, Dickinson addresses her brother William Austin Dickinson. She presents two worlds, one is the real world to which the poet and her brother belong.

The other one is an imaginative place where both of them take refuge to escape the pangs of contemporary times. The main theme of this piece is the everlasting quality of poetry or art in general. Dickinson addresses this theme and others, such as time, aging, and change, within the fourteen lines of this sonnet.

Explore There is another sky

‘There is another sky’ by Emily Dickinson is a clever and metaphor-rich poem that depicts the poet’s writing as a “garden” with “unfading flowers.”

Within the text, Dickinson speaks directly to her brother, Austin. She tells him that there is “another sky” where they can live without worry. There, the flowers live forever, and there is no frost. Time has no power over her world, it exists exactly as she conceived of it forever. This bright and uplifting poem suggests that writing has a power that transcends time and experience.

The title ‘There is another sky’ is the very first line of this piece. It is a reference to the sky of an imaginative world, a metaphorical reference to her poetry. Besides, the term “another” adds an out-worldly effect to this poem. It seems as if the poet is talking about a world that does not have a physical existence. Readers are aware of the world in which everyone lives. So, through the title, Dickinson refers to her poetry and compares it to an evergreen garden. She requests her brother Austin to come there and spend a few happy moments together.

Dickinson’s ‘There is another sky’ is a fourteen-line sonnet that is contained within a single stanza of text. These lines do not follow either of the two most famous sonnet rhyme schemes, those belonging to the Shakespearean sonnet and the Petrarchan sonnet. Rather, Dickinson uses a combination of half-rhymes and perfect rhymes in order to create a feeling of rhyme that runs throughout the text. They follow a loose pattern ABCBCDECFCGHIH. In regards to meter, the lines are closely related, with three to five metrical feet per line.

A perfect rhyme is one that is normally associated with poetry, where all aspects of the two words correspond; For example, “fair” and “there” in lines two and four and “come” and “hum” in lines twelve and fourteen:

Ever serene and fair,

Though it be darkness there;

I hear the bright bee hum:

Into my garden come!

Half-rhyme, also known as slant or partial rhyme, is seen through the repetition of assonance or consonance. This means that either a vowel or consonant sound is reused within one line or multiple lines of verse. For instance, “sky” and “sunshine” at the ends of lines one and three as well as “garden” and “been”.

Dickinson makes use of several poetic techniques in ‘There is another sky’. These include but are not limited to alliteration, enjambment, and metaphor.

There is another sky,

Ever serene and fair,

And there is another sunshine,

Though it be darkness there;

In the first four lines of ‘There is another sky,’ the speaker begins by making use of the line that later came to be used as the title. Dickinson’s poetry more often than not went without titles. They are usually known by the first line or by a number. The speaker suggests that there is “another sky” in addition to the sky that the listener is already familiar with. Under this sky, everything is “serene and fair”. Another sun shines there despite the fact that it’s “darkness there”.

While it is not entirely clear at this point what these lines refer to, as the speaker progresses it becomes clear that she is describing her writing through an elaborate metaphysical conceit. While writing, she is able to create her own world where everything stays as she originally depicted it and is not subject to the ravages of time.

Here is a little forest,

Whose leaf is ever green;

In the next quatrain, she addresses her brother, Austin. She asks this man to ignore the “faded forests” and the “silent fields” of the physical world. Rather, he should come to the little forest that she has created under the new sky. There, the “leaf is ever green”. This is an allusion to the way that life is sustained in this other world, nothing can touch it. This is emphasized further in the third quatrain.

Here is a brighter garden,

Where not a frost has been;

In its unfading flowers

I hear the bright bee hum:

Into my garden come!

The speaker continues to describe her garden in the third and final quatrain. In these lines, she uses the word “brighter” to compare the world she has created to the one that everyone lives in physically. It is a place where there never has been, nor will there be, “a frost”. This is an allusion to death, change, and anything negative that in the real world is a true risk.  The flowers are “unfading,” they live forever without ever losing their beauty. There are other forms of life as well, such as the “bright bee”.

These warm and bright images are concluded with the final couplet, or set of two lines at the end of a Shakespearean sonnet. They ask Austin, the poet’s brother, to again “come” to her garden. There, within her writing, he won’t have to be concerned with the dangers of the real world, aging, or change.

Dickinson’s ‘There is another sky’ is a sonnet that taps on to several interpretations. Firstly, the tone of the poem guides readers to imagine a fairy-tale-like world. One has to imagine this place as it does not have any physical existence. The poet welcomes her brother to that place. Besides, to look at this poem from a different perspective one has to focus on the theme, timelessness of poetry. Through this poem, the poet metaphorically compares her literary world to an evergreen garden. So, the poem is in the form of a request to her brother to dive into her creation. Besides, the description of the garden is an allusion to the “Garden of Eden”, a biblical paradise described in Genesis 2-3.

The poem ‘There is another sky’ was first published in “Poems by Emily Dickinson, First Series”. It came to print in November 1890. This poem belongs to the pre-1861 writings of Dickinson. During that period, she mostly wrote on sentimental themes. Two of her earlier poetry are conventional lyrics and one is addressed to Austin. In this poem, she misses her brother and prays him to return to her. She refers to a metaphorical garden of which her brother is also aware. This poem also contains some Christian symbols that hint at the poet’s religious belief.

Who is Austin in ‘There is another sky’?

Austin is Emily Dickinson’s brother whose full name is William Austin Dickinson (1829-1895). Dickinson called him Aust or Awe in most of her letters.

What type of poem is ‘There is another sky’?

Dickinson’s ‘There is another sky’ is a modern sonnet that does not conform to any conventional forms of the sonnet. It is written in an innovative rhyming scheme and told from the perspective of a first-person speaker. So, it’s also an example of a lyric poem.

What does “There is another sky” mean?

The first line “There is another sky” is a roundabout way of referring to an imaginative world. It is a symbolic reference to Dickinson’s poetic world. It can also be a reference to biblical heaven.

What do “faded forests” stand for?

The phrase “faded forests” is a symbol of change, death, and decay.

What is the main purpose of the poem?

The main purpose of Dickinson for writing this poem is to request her brother Austin to come into her “garden”, a metaphorical reference to her writing.

Here is a list of a few poems that are similar to the themes present in Emily Dickinson’s sonnet ‘There is another sky’.

You can also read about the greatest Emily Dickinson poems and these beautiful poems about flowers.

Home » Emily Dickinson » There is another sky