Eva Gore-Booth was born in County Sligo, Ireland in May of 1870. Her parents were Sir Henry and Lady Georgina Gore-Booth of Lissadell and she was one of five children born to the Gore-Booth family. As a young girl Gore-Booth and her sister Constance were taught together by various governesses. She was educated in languages, such as French, German and Latin and grew to love poetry under the influence of her grandmother. 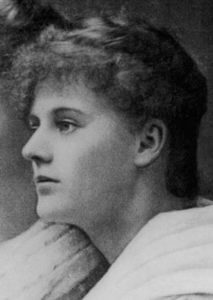 During the early years of her life she observed the Irish Famine of 1879. Luckily for the Gore-Booth family they were wealthy enough to avoid the worst of the famine. But that meant that tenants on the surrounding land to came to the house and begged for help. It is noted, through her later work, that Gore-Booth was deeply moved by what she saw and bothered by the contrast between the peasants and her own fortune.

It was also in the 1870s, while Gore-Booth’s father was in the Arctic, that her mother set up a school for women to learn textiles. The women sold their work, helping to increase their independence from their husbands or male members of their family. It is thought that Gore-Booth took in what she saw in her own household and used it to inspire her later work on women’s suffrage.

In the 1890s Gore-Booth joined her father, Sir Henry Gore-Booth who was a noted explorer, on a trip to North American and the West Indies. She spend time in Jamaica, Cuba, Florida, Vancouver, and many more cities. Her travels led her back to Ireland for a time where she first became acquainted with the very well-known poet W.B. Yeats.

Over the following years she spent time with her family in Italy where she developed a respiratory condition. The later part of the decade was spent recuperating in Bordighera. It was around this time period that she met the woman would become the most important love and closest friend of her life, Esther Roper. Esther was deeply devoted to women’s suffrage and became a primary influence on Gore-Booth’s own pursuit of equal rights for women.

Gore-Booth’s career began in the 1890s when she started writing poetry. Yeats was one of the first poets of note to read her work and recognize her talent. He became something of a mentor to her, sharing books that helped her hone her skill. It is no surprise that Yeats appreciated Gore-Booth’s work. They are both noted as Irish poets associated with the Celtic revival in Ireland.

Gore-Booth’s poetry is noted for its relation to Irish folklore. In a twist on the original stories though Gore-Booth often focused more on the female characters. Her later work is noted for its themes of sexuality and love. She worked as an editor for Urania, a feminist magazine that published stories from 1916 to 1940. She was one of the only women writing pieces about love between women, a daring endeavour during the early 1900s.

Two of her most important books of poetry, The Perilous Light and Broken Glory were published during World War I and were dedicated to the theme of pacifism. This was a theme that would return to her work in the play, The Buried Life of Deirdre, published posthumously.

In 1900 after moving back to England, Gore-Booth became one of the leading members of the Manchester Trade Union. She worked alongside Esther to organize factory workers and do what they could to advocate for better working conditions.

In 1913 Esther and Gore-Booth moved from Manchester to London due to Gore-Booth’s worsening health. The two worked closely with the British Peace Movement during World War I. The movement also saw assistance from other well-known suffragettes such as Sylvia Pankhurst. When the Women’s International Congress was held at the city of Hague she wrote an open letter in support of women from all over the world coming together to end the bloodshed of the First World War.

In regards to her family, 1916 was an important year for Gore-Booth. She was forced to petition for her sister, Constance Markievicz life. Constance has been sentenced to death for her role in the 1916 Rising in Ireland. It was due to Gore-Booth and Esther Roper that the sentence was commuted to life in prison.

The later years of her life were devoted entirely to the composition of poetry. Her final two books of poetry were The Shepherds of Eternity and The House of Three Windows. Eva Gore-Booth died of intestinal cancer on June 30, 1926, in London.