10 of the Best 17th and 18th Century British Poets

Working primarily in the 17th and 18th centuries, the poets on this list wrote on themes ranging from religion to industrialization and relationships to women’s rights. Dig deeper into the works of the best poets of all time with our Explore Poets Series. 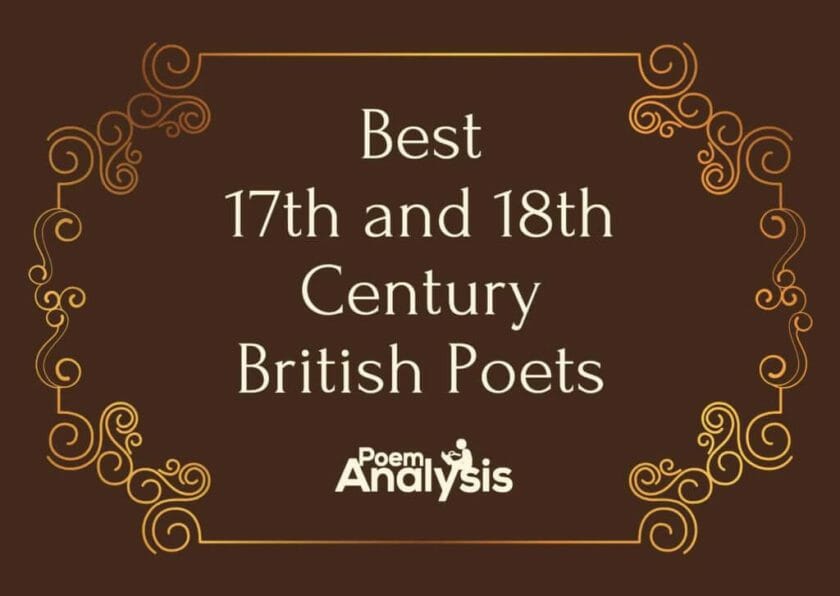 Christina Rossetti was born in London, England in December of 1830. As a young girl she was educated at home by her parents and learned to love reading while studying classics, novels and fairy tales. She was known to have found great inspiration from the works of John Keats, Matthew Lewis, Ann Radcliffe and others. Rossetti suffered from unstable health all her life, at the same time she was facing an important crisis of conscious which inspired experimentation with various verse forms. She maintained the span of her writing skills throughout her life and wrote many ballads, sonnets and hymns.

In 1862 Christina Rossetti’s most famous collection was published, Goblin Market and Other Poems. Her career was firmly established at this point and she was receiving encouragement from the greatest poets of the day.  Throughout the following two decades Rossetti published a number of other volumes including, A Pageant and Other Poems, in 1880, and Called to Be Saints: The Minor Festivals Devotionally Studied, in 1881. In 1892 Rossetti was diagnosed with breast cancer. She died in December 1894.

Popular poems include: ‘Goblin Market,’ ‘The World’ and ‘As froth on the face of the deep’

William Blake was born in Soho, London, England in November of 1757. After leaving school at the age of ten, and falling under the tutelage of his mother, Blake claimed to have had the first of his famous angelic vision. It was an experience that would become a reoccurring theme in his life.

As he aged, he developed a love for drawing, painting, engraving and writing. Some training in his youth helped prepare him for his later artistic endeavours. In 1782 he was married and the following years his collection Poetical Sketches was published. After his brother died, Blake claimed he came to him in a vision, inspiring him to create an original printing method for his artwork, known as “illuminated printing”. This way of working would be utilized in his best-known collection Songs of Innocence and Experience.

William Blake died in August of 1827 leaving behind a number of unfinished collections, as well as illustrations for Bunyan’s Pilgrim’s Progresses, Dante’s Inferno, and an illustrated manuscript of the Book of Genesis.

Popular poems include: ‘The Tyger,’ ‘The Sick Rose,’ and ‘Jerusalem’

Percy Bysshe Shelley was born in 1792 in Broadbridge Heath, England. While in school Shelley was well known for his liberal views and was once chastised for writing a pamphlet titled, The Necessity of Atheism. Soon after this, he eloped with a 16-year-old woman, Harriet Westbrook, of whom he soon tired. It was at this time that Shelley began writing his long-form poetry for which he is best known.

Shelley had two children with Harriet but before their second was born he left her for the future author of Frankenstein or The Modern Prometheus, Mary Godwin. Mary became pregnant with her and Shelley’s first child soon after and Harriet sued Shelley for divorce. Soon after this Mary and Percy met Lord Byron or George Gordon, it was through one of their meetings that Mary was inspired to write Frankenstein.

In 1816, Percy Bysshe Shelley’s first wife Harriet committed suicide and Mary and Percy were official wed. In early 1818 Shelley and his wife left England and Shelley produced the majority of his most well-known works including, Prometheus Unbound. Not long before he was meant to turn 30, Shelley was drowned in a storm while sailing in his schooner on the way to La Spezia, Italy.

Popular poems include: ‘Ozymandias,’ ‘To a Skylark,’ and ‘Mutability’

Helen Hunt Jackson was born in Amherst, Massachusetts in October of 1830. Jackson’s poetry is noted for its intense sorrow and feelings of loss. In an effort to escape from her ruined life, she moved to Newport in 1865. It was here that she first began to write seriously. Her first successfully published poem, ‘Coronation,’ appeared in The Atlantic three years later. She would go on to publish in The Nation, The Century, and Independent.

In 1875, after moving to Colorado, she married William Jackson. He was a banker and railroad executive. Jackson wrote prolifically, but her earliest works were published under the name, H.H. Today she is remembered for her efforts to shed light on the plight of the Native Americans. One of her best-known works, A Century of Dishonour, speaks on the “Indian policy.” This was the first work published under her own name and she sent a copy to every current member of Congress. Helen Hunt Jackson died in 1885 of stomach cancer. She now rests in the Evergreen Cemetery in Colorado Springs, Colorado.

Popular poems include: ‘Poppies on the Wheat,’ ‘Dreams,’ and ‘September’

Alfred Lord Tennyson was born in August of 1809 in Somersby, Lincolnshire, England.

By the age of twelve, he had written his first epic poem that consisted of 6,000 lines, and by the time he was seventeen he and his brothers had a collection of poetry published. From 1830 to 1833, Tennyson published two more books of poetry. These were not met with outstanding reviews, a fact that greatly disappointed him. His naturally shy disposition kept him from publishing again for another nine years. Tennyson finally found success in 1842 after the publication of this book, Poems in two volumes.

It was in 1850 that Alfred Lord Tennyson reached the peak of his career. He published what is considered to be his masterpiece, ‘In Memoriam A.H.H.’ This piece solidified his reputation and future career and led to his being named poet laureate, following directly behind Williams Wordsworth. He would hold this position until his death. His body was interred at Westminster Abby, and to this day he remains one of the most popular Victorian poets.

Popular poems include: ‘The Lotos-eaters,’ ‘Tithonus,’ and ‘The Charge of the Light Brigade’

William Wordsworth was born in Cumberland, England in 1770. He met with early tragedy in his young life as his mother died when he was only seven years old and he was orphaned at 13. Though he did not excel, he would eventually study at and graduate from Cambridge University in 1791. Wordsworth fell in love with a young French woman, Annette Vallon while visiting France and she became pregnant. The two were separated after England and France declared war in 1793 and Wordsworth began to develop his radical ideology. Soon after, Wordsworth became friends with Samuel Taylor Coleridge and the two co-wrote, Lyrical Ballads, which contains some of the most well-known poetry from both writers.

Wordsworth’s radical ideas did not last as he aged and by 1813, reunited with Vallon and their child, he moved to the Lake District. He continued to create poetry, although his most productive period had passed, until his death at 80 in April of 1850. He had held the position of England’s poet laureate for the last seven years of his life.

Popular poems include: ‘Daffodils,’ ‘Lines Composed a Few Miles above Tintern Abbey’ and ‘The Prelude’

John Keats was born in October of 1795 in Moorgate, London, England. His first published work ‘O Solitude!’ appeared in 1816. His career stagnated for most of his life, even though he became known in the London literary scene, with contemporaries such as Percy Bysshe Shelley and William Wordsworth.

Throughout his short life, Keats only published three volumes of poetry and was read by only a very small number of people. Those who did read his poetry, especially critiques, denounced it as worthless. In 1819, he contracted tuberculosis and left for Italy where he suffered in agony, partially due to his medical treatments, until his death in February of 1821 at only twenty-five years old.

Popular poems include: ‘Ode to Psyche’, ‘Bright Star’ and ‘The Eve of St. Agnes’

Elizabeth Barrett Browning was born in Coxhoe Hall, Durham, England in March of 1806. Browning was educated at home and began writing poetry at the age of four. During these early years her family compiled her poems into a work titled, Poems by Elizabeth B. Barrett. It was also around this time that she began to deal with an unknown illness. She had intense headaches and spinal pain that degraded her mobility.  She was plagued by these symptoms for the rest of her life.

During the early 1840s, Browning wrote a great deal. She published the poem ‘The Cry of the Children’ in Blackwoods. It was a work that was focused on the condemnation of child labour. In 1844, she published two volumes of her work as well as two essays in The Athenaeum. She was a candidate for poet laureate alongside Tennyson in 1850 and is considered one of Britain’s best-loved and prolific poets.

Elizabeth Barrett Browning married Robert Browning in September of 1846. The two lived in Italy for the rest of Elizabeth’s life. Browning’s health began to decline in the early 1860s. She had developed what might have been tuberculous ulceration of the lungs and died in June of 1861.

Popular poems include: ‘Sonnets from the Portuguese (XXIV)’, ‘George Sand: A Desire,’ and ‘Patience Taught by Nature’

Lord Byron was born George Gordon in 1788 in Aberdeen, Scotland. He gained his title at the age of ten and became, Baron Byron of Rochdale. As a child he was abandoned and shunned by his parents due to the club foot he was born with, something he would be consistently embarrassed by throughout his life.

He studied at Trinity College, Cambridge and it was during this time that he published his first volumes of poetry, Fugitive Pieces and Hours of Idleness. By the time Byron was twenty years old he was facing a massive amount of debt and a small amount of fame that was mainly contained to the aristocratic class.

Popular poems include: ‘She Walks in Beauty,’ ‘Darkness,’ and ‘On the Death of a Young Lady’

Samuel Taylor Coleridge was born in Devonshire, England in October of 1772. After his father died, Coleridge moved to London where he studied at Christ’s Hospital School. While there, he accumulated a large debt that followed him for his entire life.

In the late 1790s, Coleridge met William Wordsworth and began the most important period of his writing. Wordsworth and Coleridge soon started their collaboration on Lyrical Ballads, a collection of poems that is considered to be one of the greatest works of the Romanic Movement. It was published in 1798. Coleridge died in July of 1834 after struggling with illness and an addiction to opium.

Popular poems include: ‘Rime of the Ancient Mariner,’ ‘Fears in Solitude,’ and ‘Reflections on Having Left a Place of Retirement’