The poets on this list range in style, background, and the social, personal, and cultural contexts from which they drew inspiration. But, they all made an undeniable impact on 20th century American poetry.

All contributed in some way to literature today, and many, despite their lasting influence, are not as well-recognized as they might be. Dig deeper into some of the life and works of some of the world’s most influential poets with our Exploring Poets Series. You can also refer to our Series of the Greatest Poetry. 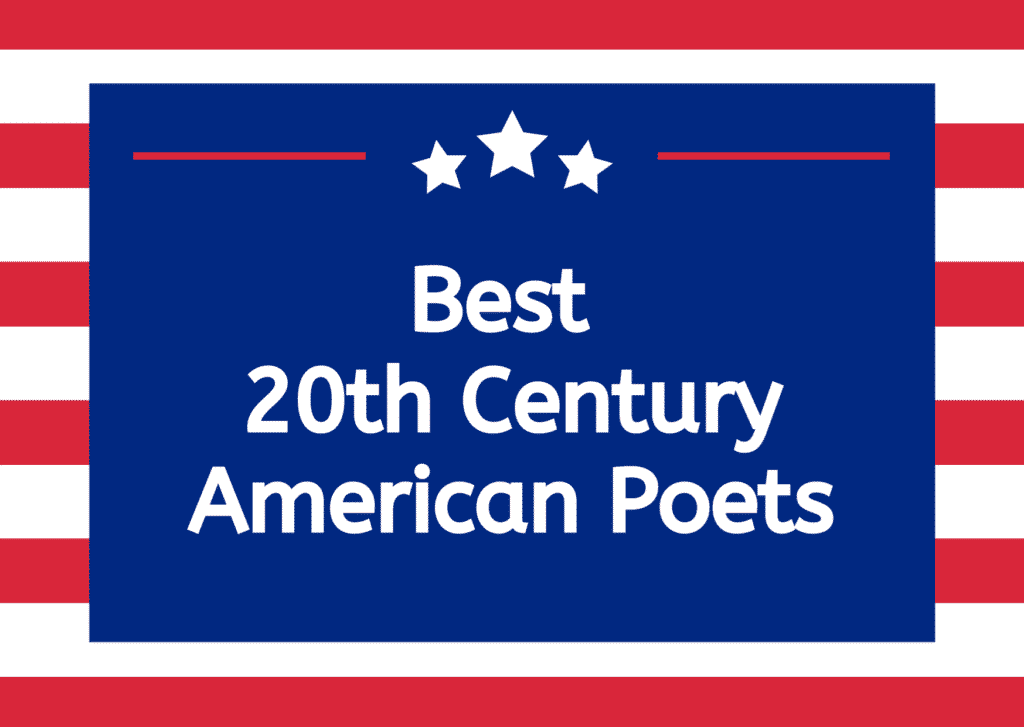 Sylvia Plath, one of the best American poets of the 20th century, was born in Boston, Massachusetts in October of 1932.

After a series of disappointing experiences in New York, (which would later inspire The Bell Jar) Plath was sent down a dark path. She began to self-harm and was admitted to the hospital for electroconvulsive therapy. Plath was likely suffering from some form of bipolar disorder. There were no effective medications to treat this disease during her lifetime. She was nineteen when she first attempted suicide.

The later parts of 1962, were the most creative of Sylvia Path’s life. During that time, Plath wrote the majority of the poems which would be included in Ariel. Although she was succeeding poetically, she was still deeply unhappy. She tried to kill herself many times throughout the early 60s, and in February of 1963, she succeeded. She was thirty years old. Today, literary critics consider her to be one of the best poets of her generation. Some of Plath’s greatest poems are still read today.

Audre Lorde, one of the best African-American poets, was born in New York, New York in February of 1934.

Her full birth name was Audrey Geraldine Lorde and her parents were Caribbean immigrants who settled in Harlem. By the time she was twelve, she had written her first sections of verse. During this time period, she was able to publish her first poem in the Seventeen magazine.

In 1954 she spent a year at the National University of Mexico. She would later cite this period as being that which affirmed her identity as a poet and lesbian. It was also around this period of time that Lorde married Edward Rollins, a gay man, with whom she would have two children. The couple divorced in 1970. Lorde was to meet her long-time partner Francis Clayton two years later. She published her first book of poetry, The First Cities, in 1968.

In 1974 she published New York Head Shop and Museum. Thereafter, she published Coal and The Black Unicorn. These works are notable for their themes of protest and resistance. The poems called for social and racial justice. These are the main themes that would become integral to Lorde’s legacy as a central figure of several equal rights movements— from second-wave feminism to LGBTQ equality. From 1991 until she died in 1992 Audre Lorde was the poet laureate of New York. She passed away in November of that year from liver cancer.

e.e. cummings, one of the best 20th-century American poets, was born Edward Estlin Cummings to his parents in Cambridge, Massachusetts in October of 1894.

As a child, he spent a great deal of time composing poetry and would write every day from eight to twenty-two. Cummings published his first poems in Eight Harvard Poets in 1917. His works are notable for their experimental style and distinct word choices. He would later make use of many different originally coined compound words within his verse.

After the war, the poet made a home in Paris and then New York. It was there that he published, Tulips and Chimneys, in which his original use of language was present. XLI Poems was published in 1925. These two works solidified his reputation as a poet of the avant-garde.

Maya Angelou was born in January of 1928 in St. Louis, Missouri. Her full birth name was Marguerite Anne Johnson but she came to use, “Maya” because of her little brother, Bailey Jr. It is a slurred combination of “my-a” and “sister.” Throughout her life, she published seven autobiographies as well as several books of poetry. Her essays were compiled in three books and she is credited in many plays and television shows throughout her long career.

Maya Angelou’s first autobiography is I Know Why the Caged Bird Sings. It became one of Angelou’s most popular works, was published in 1969. It was the piece that brought her the recognition she had been searching for.

In the last decades of her life, Angelou accepted the lifetime Reynolds Professorship of American Studies. She was one of the only full-time African American professors on staff at the university. The late 1990s and early 2000s saw Angelou campaigning with democratic candidates such as Hilary Clinton and directing her first film, Down in the Delta. Maya Angelou, the best of 20th-century American poets, died in May of 2014 after a period of bad health.

Robert Frost was born in San Francisco, California in March of 1874. He was a writer and naturalist and is today one of the best-loved of modern poets.

Frost’s poetry is admired for its depictions of normal people, living simple lives in the rural countryside. He often touched on themes of isolation, loneliness, life, and death, usually depicted through metaphors utilizing nature.

He was named the poetry consultant to the Library of Congress from 1958-59, and he recited a poem at the inauguration of John F. Kennedy. Before this death, he was awarded over forty honorary degrees although he never graduated from a university. He also traveled to the Soviet Union with the Interior Secretary where he helped lobby for peace between the two countries.

Marianne Moore was born in 1887 in St. Louis, Missouri, and grew up in Pennsylvania. Her first published works appeared in her university literary magazine. She took a job at the New York Public Library in 1921 and during that time period published her first volume of poems, Poems. Her next collection came out three years later titled, Observations. This volume contained some of Moore’s best-known works and contains examples of her characteristic verse style. There were long free-verse poems that incorporated quotes in a fragmented form.

Moore worked as the editor of Dial from 1925 to 1929 and her international audience grew, as did her relationships to the literary scene in New York. In 1952 Moore’s Collected Poems won the Pulitzer Prize and the National Book Award. She also wrote prose, delving into a wide range of subjects such as music, visual arts, and fashion. She died as a well-known literary figure in New York and one of the best 20th-century poets across America, in 1972.

T.S. Eliot, another best American poet of the 20th century, was born in St. Louis, Missouri in September of 1888.

His full birth-name was Thomas Stearns Eliot. Eliot’s childhood was not a peaceful one. He developed a love for literature after being confined to his home. He was afflicted with a congenital double inguinal hernia, this meant he was unable to socialize with his peers and was forced to spend a great deal of time alone. Eliot eventually attended Harvard College where he studied Indian philosophy and Sanskrit.

In 1915, T.S. Eliot published ‘The Love Song of J. Alfred Prufrock‘. This collection contained some of Eliot’s best-known, and now most-loved poems. These include ‘Portrait of a Lady’ and ‘Rhapsody on a Windy Night.’ His second collection was published in 1920 in which he published ‘Whispers of Immortality’ and ‘Gerontion’. His poetic works, Ash Wednesday, Coriolan, and Old Possum’s Book of Practical Cats were all published in the 30s. In January of 1965, Eliot contracted emphysema and died in his home in Kensington London.

Other popular poems include:

Langston Hughes was born in Joplin, Missouri in February of 1901. He published his first short stories, play, and poetry in high school. He spent a brief period at Columbia University before leaving in 1922 due to the racial prejudice amongst the students and teachers.

His first collection, The Weary Blues, appeared soon after in 1926. This work won first prize in a literary magazine competition and supplied him with the scholarship he needed to continue his studies. The collection Fine Clothes to the Jew appeared in 1927. He published his first novel, Not Without Laughter, in 1929.

In 1940 he published an autobiography of the first part of his life. It was titled The Big Sea. He was also working for the Chicago Defender writing about a comical character he named Jesse B. The decade also saw Hughes contribute lyrics to a Broadway musical and begin teaching creative writing at Atlanta University. At the beginning of 1951, he published ‘Harlem (What happens to a dream deferred?)’. This poem is one of Langston Hughes’ greatest poems. This great 20th-century American poet died in May of 1967 from complications due to prostate cancer.

Elizabeth Bishop was born in 1911 in Worcester, Massachusetts, and was raised by her grandparents after the death of her father and the commitment of her mother to a mental institution.

As a young woman, she became friends with Marianne Moore, but unlike Moore, her reputation was rather minimal during her lifetime. Her first collection of poems North and South was published in 1946 and her second, nine years later Poems: North & South/A Cold Spring won the Pulitzer Prize.

Bishop spent the next period of her life living in Brazil with her lover, Lota de Macedo Soares. She committed suicide in 1967. After this loss, Bishop moved back to America to teach at Harvard in the early 70s. She received the National Book Award in Poetry for The Complete Poems. Bishop lived a privileged upper-class life and was, therefore, able to spend time writing, painting, and traveling freely. She died in 1979.

Wystan Hugh Auden was born in February of 1907, in York, England. (He later became an American citizen.) He was versed in all poetic techniques and forms and became known for working contemporary events and everyday speech into his verse.

From a young age, he studied poems by writers such as Emily Dickinson, William Blake, and Gerald Manley Hopkins. He also professed a strong dislike for the Romantic poets.  Auden’s first volume of poems titled, Poems, was printed in 1928.

In 1932, Auden published his large work, The Orators. He also spent time working as a reviewer, lecturer, and essayist. In 1973, after giving a reading of his poems in Vienna, Austria, Auden died. Throughout his life Auden published approximately 400 poems and 400 essays and reviews, that were all extremely wide-ranging in topic and form.

Today, Auden is remembered equally for his engagement with contemporary life and its most poignant troubles. As well as for the rich fantasy worlds he crafted which often resulted in vague, sometimes confusing poetic landscapes.