10 of the Best British Wartime Poets

The British poets on this list wrote extensively, in both prose and verse form, n their experiences in the First and Second World Wars. They’re backgrounds, battlefield experiences and post-war lives are vastly different, but they are all united by a common desire to share what they came to understand about the nature of war. Explore the lives and works of some of the greatest poets who have ever lived with our Explore Poets Series. 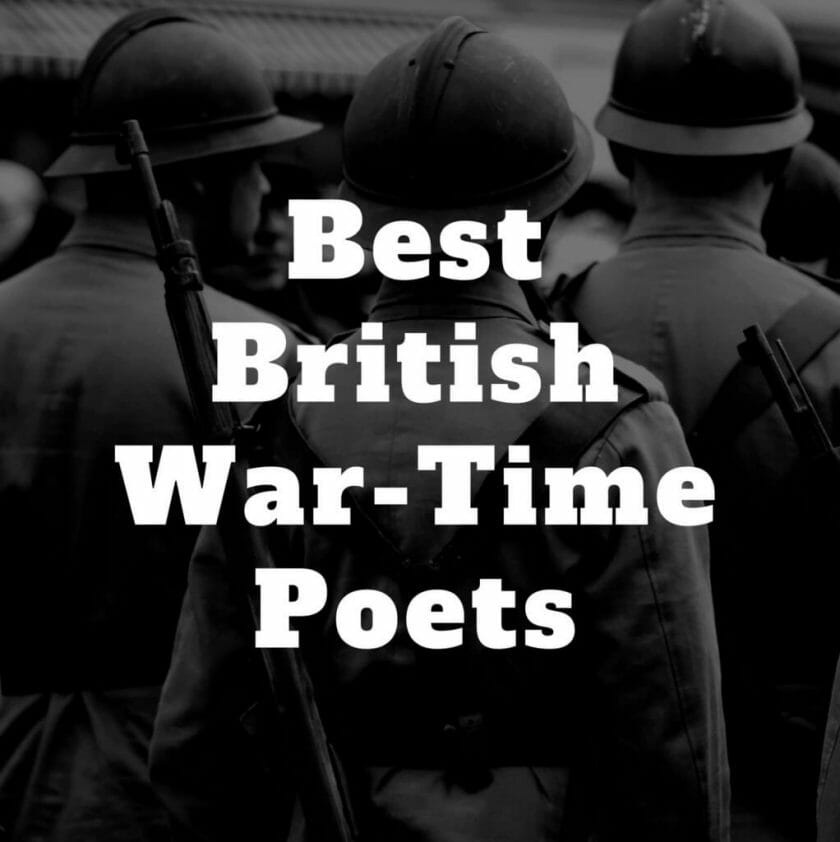 Vernon Scannell was born in Spilsby, Lincolnshire England in 1922. His family was poor, and he moved frequently, spending most of his youth in Aylesbury. It was at the age of 15 that he first found his love for poetry. He enlisted in the arty in 1940 and was sent to the North African desert. After witnessing the Gordon Highlanders looting the dead, he deserted and was court-martialed. He sent six months in prison.

His first poems were published in Tribune and The Adelphi during another period of desertion. He was arrested again and sent to a mental institution near Birmingham. He later settled in Leeds and London where he boxed and taught. In 1961 he won the Heinemann Award for Literature for his volume of poetry, The masks of Love. The year before he’d been elected as a Fellow of the Royal Society of Literature. Scannell’s best-known book is Walking Wounded, published in 1965. He went on to win an award from the Wilfred Owen association fro his contribution to war poetry. Scannell died in West Yorkshire at 85 years old.

Popular poems include: ‘Love among the Tumblers,’ ‘Pain,’ and ‘Nettles’.

Rudyard Kipling was born in Bombay, India in December of 1865. As a boy he took pleasure in the work of Ralph Waldo Emerson and Wilkie Colins. At the age of eleven he was moved to Devon, England for his health. It was there he first started writing.

Kipling’s best-known work, The Jungle Book was published in the late 1890s. This novel, along with its sequel, were produced alongside a number of volumes of poetry and another collection of short stories, in a four year period. The works, The Jungle Book as well as The Second Jungle Book, were extremely popular with children. Kipling’s life took a tragic turn in the 1930s with the death of his second child. After developing an ulcer, Kipling took his own life. His ashes were interred in Westminster Abbey in Poet’s Corner.

Popular Poems include: ‘Recessional,’ ‘The Glory of the Garden,’ and ‘If’

Hedd Wyn was born Ellis Humphrey Evans in Trawsfynydd, Merionethshire, Wales in January of 1887. He was the oldest of eleven children and sent most of his life in Cwm Prysor. Wyn left school at the age of fourteen to work on his father’s farn. From a young age he was known as a skilled poet. In 1910 he was given the name Hedd Wyn, meaning “blessed peace”. His first poem for the National Eisteddfod of Wales in 1915. In 1916 Wynn was sent to join the British Army. He disliked army life and in 1917, within the first hours of the Third Battle of Ypres, he was fatally wounded. He died during the Battle of Pilckem Ridge.

In 1934 his manuscripts were donated to the National Library of Wales and a complete anthology of his works was published in 2012.

Rupert Brooke was born in August of 1887 in Rugby, Warwickshire, England. As a young man enrolled in the same school in which his father was a master, Brookes excelled at sports as well as academics. He eventually would go on to attend King’s College, Cambridge, graduating in 1906.

Throughout the next years of his life, Brookes travelled throughout England and Europe and in 1911 he published his volume Poems. His most acclaimed work, 1914, published in 1915, brought him fame and is the source of his most well-known poems today.

At the beginning of World War I he received a commission with the Royal Navy. He would not survive the war, contracting septicemia in Skyros, Greece and dying soon after in 1915.

Popular poems include ‘Retrospect,’ ‘The Great Lover,’ and ‘The Dead‘

Wilfred Owen was born in March of 1893 in Oswestry, Shropshire. His family was of Welsh descent and he grew up, one of four children, in various homes in Wales. When he was a young man he attended the Birkenhead Institute from 1900 to 1907. He later graduated from Shrewsbury Technical School at the age of 18.

Owen was unable to attend the university of his choosing, and instead entered into the church as an unpaid lay assistant. It was in this role that he developed his humanitarian beliefs and began to write poetry. In 1913 he was forced to return home due to a respiratory infection. After his recovery, he spent time teaching and tutoring in France.

By October of 1915 he had enlisted in the military and a year later, left for France with the Lancashire Fusiliers. He was wounded in combat and evacuated to a war hospital. Owen was diagnosed with shell shock. It was during this time that he wrote some of his most important work.

He would rejoin the fight in June of 1918 and was awarded the Military Cross for bravery. Owens was killed later that year at the age of 25. Today, Wilfred Owen is considered one of the greatest poets of World War I.

Siegfried Sassoon was born in Matfield, Kent, England in September of 1886. He was the second of three sons and his father died when Sassoon was quite young. His first successful publication of The Daffodil Murderer in 1913. Sassoon joined the British Army by choice in August of 1914. It was the same day that the United Kingdom declared war on Germany. He was commissioned into the 3rd Battalion, Royal Wlch Fusiliers as a second lieutenant in 1915. His younger brother was killed only months later in the Gallipoli Campaign.

Once in France, he met fellow wartime poet Robert Graves. They shared their literary pursuits with one another. Graves’ writing was deeply impactful on Sassoon’s which soon darkened to reflect the realities of war. He sought to convert the truths of trenches, corpses and death. Despite his disgust at war itself, he was a brave soldier and his career was marked by a number of courageous actions.

In 1917 he chose to stand up against the war effort and was eventually sent to the Craiglockhart War Hospital. There, he met wilder Owen. Sassoon was forced to run to battle and Sassoon was injured by friendly fire in Arras, France. In 1917 he also published The Old Huntsman, The General, and Does it Matter? After the war he went on a lecture tour of the USA and Europe. He wrote the prose novel, Memoirs of a Fox-Hunting Man in 1928. More collections of poetry followed, including Rhymed Ruminations, Collected Poems, Emblems of Experience and The Path to Peace. Sassoon died of stomach cancer in September of 1967.

Popular poems include: ‘Dreamers,’ ‘The Death Bed,’ and ‘To Any Dead Officer’

Kingsley Amis was born in Clapham, South London in April of 1922. He attended St John’s College, Oxford where he read English. During this period he met and became friends with, Philip Larkin. Around that same period, he joined the Communist Party of Great Britain, later breaking off his relationship with the organization in the fifties. He was called to service in 1942 and joined the Royal Corps of Signals. His first collection of poetry, Bright November was published in 1947. It was followed by A Frame of Mind, and Poems: Fantasy Portraits. He married in 1948 and had two children with his wife, Hilary. Amis published  Lucky Jim in 1954. It was received very well by critics and was eventually translated into 20 languages.

Amis spent time travelling and lecturing in the late 1950s in the United States. He also spent a brief period as a fellow at Cambridge but regretted the appointment and later moved to London. Amis died in October of 1995 after a stroke.

Popular poems include: ‘A Note on Wyatt,’ ‘To a Baby Born Without Limbs,’ and ‘Something Nasty in the Bookshop’

Edmund Blunden was born in London in November of 1896 and spent his youth in Kent. In 1914 he had the opportunity to go on a scholarship to Queen’s College, Oxford. Instead, he enlisted in the Royal Sussex Regiment. He was commissioned as a second lieutenant and then served in France on the Western Front. He received the Military Cross for his courageous service. Despite making it through the war without injury, he spent the rest of his life dealing with the mental scares two years of battle left him with.

He left the army in 1919 and went to Oxford. While there he met Robert Graves. In 1920 he published his collection, The Waggoner. His next book, The Shepherd, came two years later and won the Hawthornden Prize. Blunden retired in 1964 and spent his later years in Suffolk. He died in 1974.

Popular poems include: ‘Festubert, 1916,’ ‘Vlamertinghe, Passing the Chateau’ and ‘Report on Experience’

Edward Thomas was born in Lambeth, Surrey, England in March of 1878. Thomas published his first book, The Woodland Life, in 1896. It contained a collection of essays about walking. He also met and married Helen Berenice in 1899. Thomas finished at Oxford in 1900. Thomas also found work as a book reviewer and later worked for the Daily Chronicle as a reviewer of contemporary poetry, criticism and country books. He was making very little a week, forcing him to take on more work and taking away time from his own creative writing practice.

Before the start of World War I, he wrote The Happy-Go-Lucky Morgans in 1913 and In the Pursuit of Spring in 1914. In 1916 Thomas started training as an Officer Cadet with the Royal Garrison Artillery. He was soon commissioned as a Second Lieutenant. Again, he volunteered and was sent to France. He was stationed in a number of different towns including Dainville and Arras. Thomas died on April 9, 1917. After his death, fellow poet W.H. Davies wrote ‘Killed In Action (Edward Thomas), published in 1918.

Popular poems include: ‘Haymaking,’ ‘As the Team’s Head Brass’ and ‘May 23rd’

Vera Brittain was born in December of 1893 in Newcastle Under Lyme, Staffordshire, England. She read English Literature at Somerville College, Oxford and delayed her degree in order to work as a Voluntary Aid Detachment nurse. She spent time during the first world war in Buxton, London, Malta and France. During the war, she lost a number of close friends, her brother and her fiancé.

Brittain’s first novel, The Dark Tide, was published in 1923 and was followed ten years later by her memoir in parts, Testament of Youth and Testament of Friendship. Then later, Testament of Experience. In the 20s she spent time with the League of nation Union as a speaker. She helped the war effort during the second world war as a fire warden. Brittain travelled around the country raising funds for the Peace Pledge Union’s food relief camp again and spieling out against the bombing of German cities. She became a devoted pacificist and contributed to Peace News. Brittain died in March of 1970 at the age of 76.

Popular poems include: ‘August, 1914’ ‘Roundel,’ and ‘The Superfluous Woman’