The Slave Auction by Frances Harper

Have you ever imagined what it felt like observing innocent lives being traded at the slave auction? It is vividly portrayed through the eyes of Frances Harper in her poem ‘The Slave Auction’. 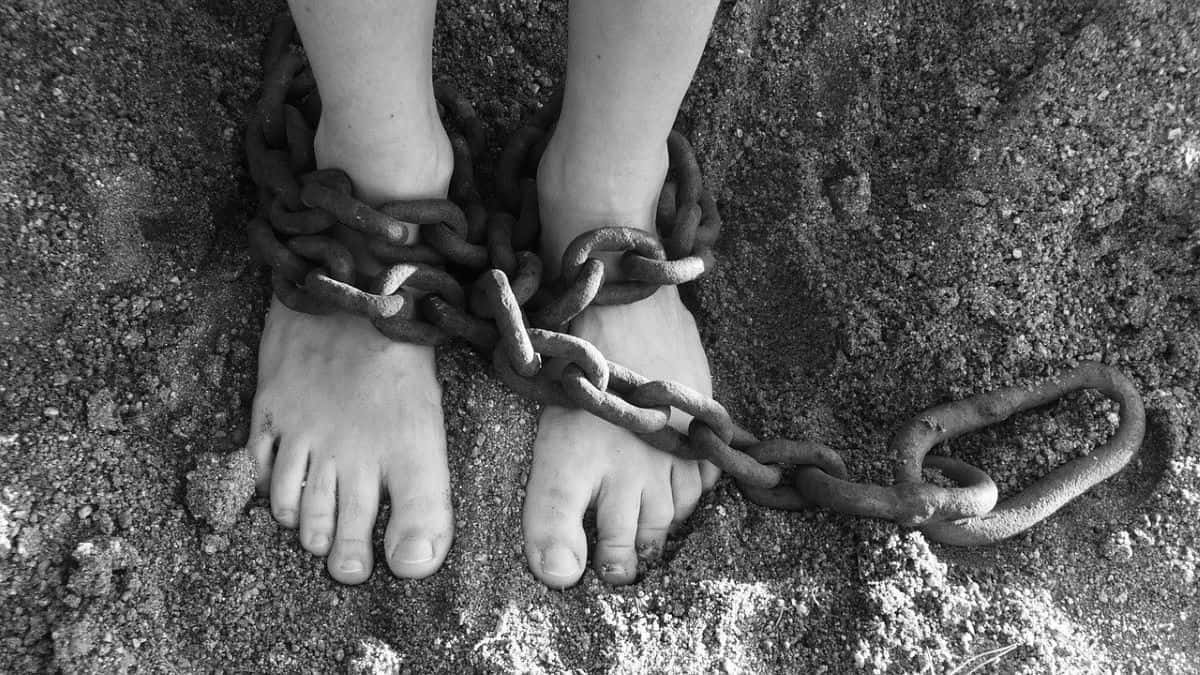 ‘The Slave Auction’ is written by the abolitionist, suffragist, African American poet France Ellen Watkins Harper. This poem features how an observer felt when she watched the blacks being traded at an auction. Harper throws light on the feelings of those (especially black women) who are going through excruciating pain to see their loved ones taken away from them. Their only fault was their sable form, the hue that kept them subjugated in the racist eyes. Harper portrays this vividly in her poem.

‘The Slave Auction’ by Frances Harper describes the scene of a slave auction where women lose their loved ones and the speaker’s realization after watching the scene.

This poem depicts how it feels to be in a slave auction. She was surrounded by black women whose children and husbands were being sold there. There were young women who were in shame and distress for the happenings with them as well as others of their community. Some black mothers were grieving as their little ones were bartered for mere “gold”. Not only that, even some of them are experiencing the pain of losing their husbands. They were remembering their past memories. Men and children who gathered on that cursed auction thought their hue was responsible for their suffering. Lastly, Harper remarks none can understand their pain unless they are standing in a similar situation.

Harper’s poem consists of six quatrains or stanzas having four lines. Each quatrain contains four alternative rhyming lines. The rhyme scheme of this piece is ABAB and it is maintained throughout. For example, in the first stanza, “there” rhymes with “despair” and “wretchedness” rhymes with “distress”. This regularity in the rhyme scheme creates an ironic effect in this poem. Regarding the meter, this poem is written in iambic tetrameter. It means each line consists of four iambs. For example: “The sale/ be-gan/—young girls/ were there.” Readers can put stress on both the syllables of the third foot. Then it will be a spondee.

In ‘The Slave Auction,’ readers can find the following literary devices.

The sale began—young girls were there,

Defenseless in their wretchedness,

Whose stifled sobs of deep despair

Revealed their anguish and distress.

Frances Harper’s ‘The Slave Auction’ begins directly. The introduction of the poem takes readers to a scene where slaves are auctioned. They can see some young girls are standing there, waiting to be sold. What is going on in their minds? According to the poet, they are “defenseless” in their “wretchedness”. These two quoted words describe their state. They don’t have any defense neither they are in a condition to protest. The slavers have already made them wretched.

Their “stifled sobs” remembers the speaker of some despair. It means the girls could not even cry forcefully. There is hidden pain inside their heart that is stifling their breath, thus they are suffocating inside. Harper hints at this pain by “deep despair”. Such a state of those girls revealed their anguish and distress. This scene was common among slaves held captive at a young age and denied freedom.

And mothers stood, with streaming eyes,

And saw their dearest children sold;

While tyrants bartered them for gold.

In the second stanza, Harper depicts what is the mental condition of the mothers. So, there are not only young girls but also some mothers standing. They are crying helplessly. It seems as if their tears will not ever stop. That’s why Harper uses the metaphor of “streaming eyes”. Here, the tears are compared to a stream that flows ceaselessly.

But why are they crying? The second line gives the answer. Their dearest children are being sold. If a mother cannot bear the pain of her child’s little pains, how can she control herself if someone is taking her child away for selling? The slavers noticed their pain but avoided it. They are busy selling those innocent kids for gold. Harper metaphorically compares them with “tyrants”.

And woman, with her love and truth—

For these in sable forms may dwell—

Gazed on the husband of her youth,

With anguish none may paint or tell.

There were women in the slave auction. They were waiting with heavy hearts for their “love” of life. Harper uses the terms “love” and “truth” together for a specific reason. She tries to say that a black woman came to the auction to remain true to her partner, even if she was going to lose her within a moment.

In the second line, Harper uses the term “sable forms” to refer to their husbands. “Sable” means “black”. When they looked at their husbands, they tried to remember how strong they were in their youth. But, on that day, those black men could not fight back, so they submitted to the oppressor’s blow. Seeing their condition, their wives were in extreme anguish that no painter or poet could portray.

And men, whose sole crime was their hue,

The impress of their Maker’s hand,

And frail and shrinking children too,

Were gathered in that mournful band.

The fourth stanza talks about the men in the slave auction. Harper indirectly asks, “What was their sole crime?” She tells readers that their only crime was they were black. So, their freedom was dependent on the color of their skin. It seems quite absurd. But, it was the reality of slavery.

In the second line, Harper ironically says that their black hue is an impression of God’s hands. He is the one who made them in that way. So they were not responsible for what was happening to them. Not only men, but children were also extremely frail due to the unhealthy condition they were living in. They were shrinking day by day.

In the last line, Harper refers to the gathering as a “mournful band” as if it was some funeral. Why can’t it be a funeral? If someone is losing their loved one forever, it creates a funeral in their mind.

Ye who have laid your loved to rest,

And wept above their lifeless clay,

Know not the anguish of that breast,

Whose loved are rudely torn away.

In the fifth stanza, Harper’s speaker tells her readers a shocking thing. According to her, those who have lost their loved ones and wept above their lifeless bodies, cannot even understand a black mother’s pain. A wife whose darling husband is taken away for her is suffering more than them. Not only them, but a young black girl also undergoes excruciating pain when the ground of freedom slides Within a flash of a second.

That’s why Harper says they cannot understand “the anguish of that breast.” In the quoted phrase, she uses synecdoche. Here, she refers to black women. The slavers rudely tore their loved ones away. It seems as if a person was tearing an unripe fruit from the branches of a tree. Only a mother whose weening child is taken away from her can understand this pain.

Ye may not know how desolate

Are bosoms rudely forced to part,

And how a dull and heavy weight

Will press the life-drops from the heart.

The last stanza of ‘The Slave Auction’ reiterates the idea of the penultimate one. In this section, Harper again refers to their bosom as a “desolate” place. Without their loved ones, their mind is a barren ground that is not going to be fertile again. The slavers are responsible for their distress. They force rudely to part two souls. Those who have not ever felt that way, cannot even know how slavery feels like.

Harper compares slavery to a “dull and heavy weight” that will press the “life-drops” out from a black woman’s heart. Here, “life-drops” is a metaphor for blood. It seems as if the bondage of slavery pierced their heart and made them bleed.

The poet of ‘The Slave Auction,’ Frances Ellen Watkins Harper was an abolitionist, suffragist, and writer. Harper was the first African American woman to be published in the United States. In Frances Harper’s poems, readers can find the themes of racism, slavery, and discrimination. Through her writing, she stood by the rights of the blacks and protested against the cruel custom of slavery. She wrote various poems specifically for the rights of black women. In this poem, readers can find how she highlights the pain of black women who are dragged to a slave auction to see their loved ones being sold.

When was ‘The Slave Auction’ written?

Frances Harper’s ‘The Slave Auction’ was published in her “Poems on Miscellaneous Subjects” in 1854.

What is the poem ‘The Slave Auction’ about?

This poem is about a slave auction where several black women are standing in extreme pain and distress as their loved ones being torn away from them.

What is the theme of ‘The Slave Auction’ by Frances E.W. Harper?

Harper’s poem ‘The Slave Auction’ taps on the themes of love and loss, slavery, and the pain of losing a loved one.

What does the line “Will press the life-drops from the heart” mean?

The last line metaphorically refers to the pain of a woman. The “dull and heavy weight” of slavery presses the “life-drops” or blood from her heart.

What is the tone of ‘The Slave Auction’?

The tone of this piece is somber, emotive, painful, and depressive. Harper’s uses an ironic in some instances.

Here is a list of a few poems that similarly showcase the themes present in Frances Harper’s poem ‘The Slave Auction’.

You can also read about these moving poems on slavery and the best-known poems on freedom vs confinement.

The subject of a poem might also be called the main idea, goal, or thing about which the poem is concerned.
Full Description | Glossary