‘Poem [Lana Turner has collapsed!]’ was written while O’Hara was traveling on the Staten Island Ferry. He was on his way to a poetry reading at which he read this very poem a few hours later. It is representative of many of O’Hara’s most famous poems in that it has references to contemporary culture and facts of everyday life. He was part of the New York School of Poetry, the adherents of which believed in writing lighthearted poems about everything from walks in the city to celebrity gossip. This particular poem falls in an amusing category that was created just for O’Hara known as an “I do this, I do that” poem. 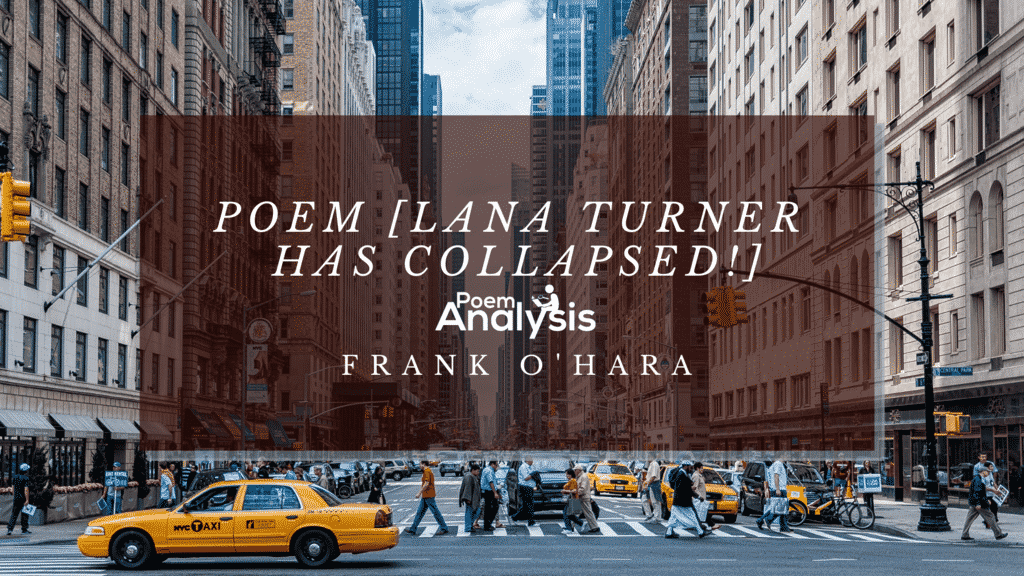 The poem takes the reader through simple details that depict the landscape of New York, the speaker’s state of mind, and his surprise at learning that Lana has collapsed. He’s with a companion of some sort, to whom this poem is addressed, but doesn’t pay too much attention to this person. Instead, he’s more interested in the weather, comparing New York to California, and the world of Lana Turner.

O’Hara engages with themes of admiration and culture in ‘Poem [Lana Turner has collapsed!]’. This is far from the only poem in which O’Hara considers the influence of contemporary celebrity culture on himself, on another speaker, or on the broader population. He was well acquainted with the world he speaks about in this poem and isn’t embarrassed about his admiration of it. The speaker admires Lana for the attention she gets and the fact that she remains so steadily in the spotlight. This is something quite unusual in the larger world of poetry. Most poets throughout time would not see the point in writing about low celebrity culture. They would instead choose to write about kings, historical and mythical figures, and artists. But, O’Hara is more than willing to discuss Lana Turner in this traditionally “high art” medium of poetry.

‘Poem [Lana Turner has collapsed!]’ by Frank O’Hara is a seventeen line poem that is contained within one stanza and written in free verse. This means that the poem does not make use of a specific rhyme scheme or metrical pattern. But, there are some examples of half-rhyme throughout the text. For example, “snowing” and “hailing” at the ends of lines three and four as well as “suddenly” and “see” in line ten. Although the category of “free verse” seems as though the poem should be entirely without structure, this is not the case.

O’Hara makes use of several literary devices in ‘Poem [Lana Turner has collapsed!]’. These include but are not limited to examples of anaphora, allusion, and apostrophe. The latter, apostrophe, is seen when the speaker addresses someone or something that either can’t hear their words or does not have the ability to hear and comprehend them. These examples are usually started with the word “oh” as is seen in the last line of this poem.

Alliteration is an important formal device that is seen in the use and reuse of the same consonant sounds. For example, “suddenly” and “snowing” in lines two and three as well as “hailing” and “head” in lines four and five.

Anaphora is another kind of repetition. It is seen when the poet uses the same word or words at the beginning of multiple lines. For example, “there is no” at the start of lines twelve and thirteen.

I was trotting along and suddenly

hard so it was really snowing and

In the first lines of ‘Poem [Lana Turner has collapsed!],’ the speaker begins with the phrase “Lana Turner has collapsed!” This is an allusion to the movie start Lana Turner whose personal life was often public knowledge. For much of her life, she was a prominent model and regarded as a sex symbol. The word “collapsed” is purposefully vague. It could refer to something like a heart attack or to something very different, like a mental break down. Rather than providing the reader with the needed details, the speaker moves on to talk about himself.

He describes how he was “trotting along,” a very upbeat depiction that is purposefully juxtaposed against the first line. As he was walking merrily along the street it “suddenly” started “raining and snowing”. This change of weather comes out of nowhere and surprises the speaker. He includes “you,” the intended listener, into the next lines. Whoever his companion is said that it was “hailing” but the speaker disagrees, stating that hail is much harder than what’s falling from the sky.

raining and I was in such a hurry

to meet you but the traffic

More details about the scene are revealed in the next lines of ‘Poem [Lana Turner has collapsed!]’. The speaker was actually on his way to meet the listener or the addressee of the poem. He describes how the traffic was acting “like the sky”. This similarity suggests that the traffic is just as bad and irritating as the snow/rain/hail.

Unfortunately, the speaker is slowed down even more by the headline “LANA TURNER HAS COLLAPSED!”. This line is placed in all-caps in order to emphasize its importance and mimic ow it would look on a newspaper headline. The use of the word “suddenly” in this line, (just like it was used in regard to the weather) informs the reader that this too came out of nowhere.

there is no snow in Hollywood

there is no rain in California

oh Lana Turner we love you get up

The speaker turns his thoughts towards life in various parts of the country in these lines of ‘Poem [Lana Turner has collapsed!]’. He thinks about New York, where he is, and life in “Hollywood” and more broadly “California”. There is a good example of anaphora at the beginning of lines twelve and thirteen with the repetition of “there is no”. He is also using hyperbole in these lines to create the feeling that things are incredibly different in New York than they are on the other side of the country. There is of course sometimes rain and snow in California just as there is rain and snow in New York at that moment.

The poem concludes with several more “I” statements. He decides to compare himself to Lana Turner. They have both been to “lots of parties” and he has acted just ad “disgraceful” as anyone but he never “collapsed”. This is an interesting comparison and its not entirely clear if he is looking down on Lana for collapsing or is perhaps jealous of the headlines that she gets for doing so.

The last line reads “oh Lana Turner we love you get up” and the poem ends without end-punctation or a real conclusion. He appears to sigh over the drama of Lana’s collapse while making use of an apostrophe, or a statement addressed to someone who can’t hear it or respond to it. Despite his exasperation, it’s clear that the speaker still cares for Lana and the world she represents. He’s going to continue to participate in it.

For readers who enjoyed ‘Poem [Lana Turner has collapsed!]’ there are several other interesting Frank O’Hara poems that are similar. For example, ‘The Day Lady Died’ and ‘Easter’. Another of interest could be ‘Famous’ by Naomi Shihab Nye in which the speaker discusses the different kinds of fame that exist in the world that the kind that she’s interested in. It is quite different from that which O’Hara’s speaker’s fame. ‘Beautiful’ by Carol Ann Duffy is another interesting choice. In this piece she discusses the potential dangers, physical and mental, that can result from beauty.