Penny dreadfuls were a cheap, serialized form of literature popular in the nineteenth century.

These sensational and cheap stories were mostly published in the United Kingdom. The words “penny dreadful” came about due to their subject matter, which was often “dreadful,” supernature, and gothic, as well as their price, one penny. Despite the decades which have passed, lovers of books, film, and television are still drawn to stories of the supernatural and unusual. Often, the same stories published in the 1800s are reworked for modern audiences. The phrase “penny dreadful” is a pejorative but it has since it came into common use. Now, it’s used broadly as a name for the genre of sensational stories that employ a similar style and appeal. 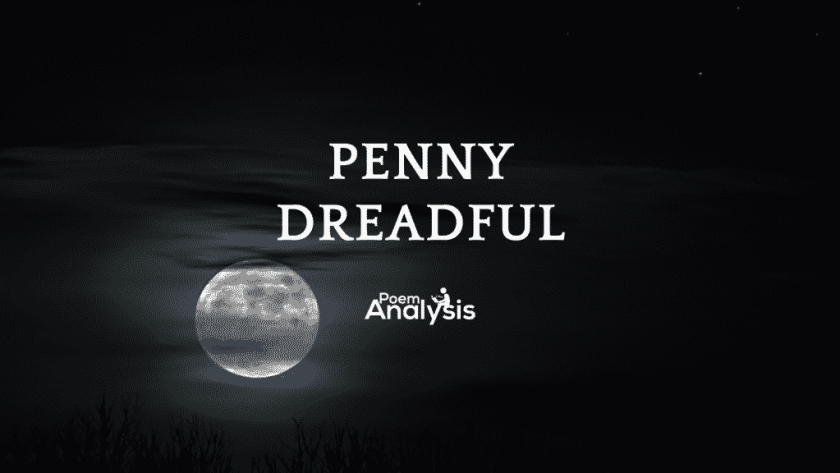 Definition and Explanation of Penny Dreadful

Penny Dreadfuls were filled with sensational subject matter, content that was meant to appeal to lower and middle classes. The stories are most often associated with the supernatural, but they also included tales of detectives, pirates, and criminals. In The Guardian, writers described the tales as “mass-produced popular culture for the young.” Illustrations were one of the most important elements of the stories. They were used as an advertising tool and a way to pull readers into the story. Often, the cover page depicted an intense moment in the story, and readers were meant to feel encouraged to find out how that event came to be.

The first penny dreadfuls were published in the 1830s after an increase in literacy rates and new technologies that made publishing pamphlets easier. From 1830 to 1850, there were around 100 publishers creating penny dreadfuls. The first appeared in 1836 and was titled Lies of the Most Notorious Highwaymen, Footpads, &c.

They initially featured tales of Sweeny Todd, Dick Turpin, and Varney the Vampire. The first of these has since been remade into a popular film. The term was first used to refer to mid-Victorian literature circulating in Britain but then expanded to include cheap fiction; anything that was aimed at young working-class men and made on cheap paper. Penny dreadfuls slowly lost their monopoly on the market with the introduction of half-penny periodicals.

Mysterious of London is considered to be the most popular series of penny dreadfuls. It was published in 1844, written by G.W.M. Reynolds. It was serialized over twelve years, number up to 624 publications.

Why Do Writers Write Penny Dreadfuls?

In the 1830s-1850s, writers chose to write penny dreadfuls in order to tap into a new entertainment market. These fiction stories played the role of contemporary television series where readers kept up, from one number to the next, waiting to find out what was going to happen. The stories were thrilling, outrageous, and opening sensational. One of the defining features of penny dreadfuls were the fact that they lasted over several weeks, months, and even years. This provided writers a dedicated source of income. Additionally, the author’s pay corresponded with the amount they wrote. This meant that there was no incentive to finish a story if there was still more material to mine.

Varney the Vampire, or the Feast of Blood, was written by James Malcolm Rymer or Thomas Peckett Prest, two of the most famous and prolific penny dreadful authors. It first appeared in 1845 and told the story of Sir Francis Varney. In the story, readers can find many of the most famous vampire tropes used in stories today.

The String of Pearls: A Domestic Romance

The String of Pearls: A Domestic Romance was likely authored by James Malcolm Rymer or Thomas Peckett Prest. It features the famous antagonist Sweeney Todd, the “Demon Butcher of Fleet Street.” It’s in this first penny dreadful that he makes his debut into the literary world. The basic premise is that Todd’s habit of killing his customers and turning their bodies over to his partner who turns them into meat pies.

The Flying Dutchman, also known as The Demon Ship, was a popular penny dreadful first published in 1839. It was influenced by 18th-century Gothic literature. Prest was one of the most prolific writers of penny dreadful, and he helped to popularize the story. As it is known today, the story of the Flying Dutchman concerns a ghost ship doomed to sail the seas for the rest of time. It originated in the 17th-century during the Golden Age of the Dutch East India Company.

Boys of England by Bracebridge Hemyng

It was in this particular story that the character Jack Harkaway was introduced to the world. He is considered to be one of the best-loved of the penny dreadful protagonists. He was everything than a young boy or man reading the story would’ve liked to have been. Jack went on adventures and exhibited a remarkable resourcefulness. The first stories in which he featured were much darker than the later iterations.

Spring-heeled Jack is one of several subjects featured in penny dreadfuls that were inspired by English folklore. The first claimed sighting of the entity was around the same period of time that the stories were rising in popularity. He was meant to have a terrifying appearance and eyes that “resembled red balls of fire.” He was also described as making enormous, inhuman leaps through the cityscape. In 1886, he featured in Spring-Heeled Jack: The Terror of London.