George Eliot was born in Nuneaton, Warwickshire, England in November of 1819. She was born Mary Anne Evans to parents Robert Evans and Christiana Evans. Evans also had a sister, Chrissey, a brother, Isaac, and two twin brothers who died shortly after birth. Her father worked as the manager of Arbury Hall Estate in Warwickshire and when Evans was still young when the family moved to Griff House. 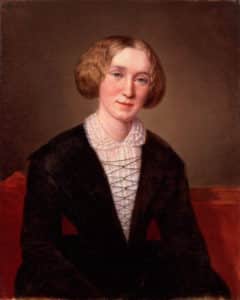 Evans was known to be a prolific reader from a young age and due to the fact that her family did not consider her potential for a good marriage to be high, they invested in her education. When she was very young she spent time at Miss Latham’s school in Attleborough and then at another school in Nuneaton and finally Miss Franklin’s school in Coventry. These experiences helped to define her concept of religion which would make its way into a number of her works.

Although Evans did not receive any formal education beyond the age of sixteen, she did spend a great deal of time exploring the books within the estate her father managed. She was particularly drawn to Greek literature which had a notable influence on her work. With the death of her mother in 1836, Evans worked as the family’s housekeeper for a short period. She then moved with her father to Foleshill near Coventry.

While there, Evans spent time in the company of liberal thinkers. She met writers such as David Strauss and Ralph Waldo Emerson while visiting her close friends, the Brays. Evans began to question her religious faith and her father, in a rage, threatened to throw her out of the house.

After her father died in 1849 she traveled to Switzerland where she lived alone for a period do time. After her time away she returned to England and settled in London where she focused on her writing career. She became the assistant editor of The Westminster Review in 1851 and did a great deal of the work producing the journal, contributing a number of essays and reviews over the two years of her employment. Her position as a woman and an editor of a literary journal was quite unusual at this time.

In 1851, Evans also met the philosopher George Henry Lewes. The two moved in together, ignoring the fact that Lewes was already married. They traveled to Weimar and Berlin on what was similar to a honeymoon as they considered themselves to be married.

Evans was not content with her contributions to The Westminster Review. She had greater goals of becoming a novelist. Within the essay, “Silly Novels by Lady Novelists” Evans lays out her literary manifesto.

The first work which was published under the pen name “George Eliot” was published in Blackwood’s Magazine in 1857. It was titled, “The Sad Fortunes of the Reverend Amos Barton” and was one of three stories that would comprise Scenes of Clerical Life. It was very well received and was followed by her first novel, Adam Bede, which was also successful. There was a great deal of curiosity around the author’s identity at this time. This led to the revelation that “Eliot” was in fact Mary Anne Evans.

In 1877, it was clear that the public had accepted Evans as a writer as she and Lewes were introduced to Princess Louise, the daughter of Queen Victoria. Over the next fifteen years, Evans wrote a number of other popular novels These included The Mill on the Floss which was finished in March of 1860 as well as Silas Marner, in 1861. Perhaps her best-known novel, Middlemarch, was published between 1871 and 1872. Evans’ final novel, Daniel Deronda was published in 1876 around the time that Lewes’ health was failing. He died in 1878. Evans spent the next years editing his final work, Life and Mind.

Throughout her life, Evans also published a number of collections of poetry. The first were Agatha and Brother and Sister 1869. These were followed by Armgart in 1871 and Stradivarius in 1873. Her last collections of verse were In a London Drawingroom and Count That Day Lost.

In 1880, Evans married John Cross, who was twenty years her junior. This disparity brought a bit of controversy in the public eye. While the couple was honeymooning in Venice, Cross jumped from the balcony of their hotel into the Grand Cana while suffering from depression. He survived the incident and the couple returned to England. Their life together did not last long. Evan contracted a throat infection which, coupled with by kidney disease led to her death. She died on December 22, 1880, at the age of 61.