‘Virtue’ is one of George Herbert’s spiritual poems stressing the need of keeping a virtuous soul. Herbert creates a contrast between earthly things and a virtuous soul to make his point. 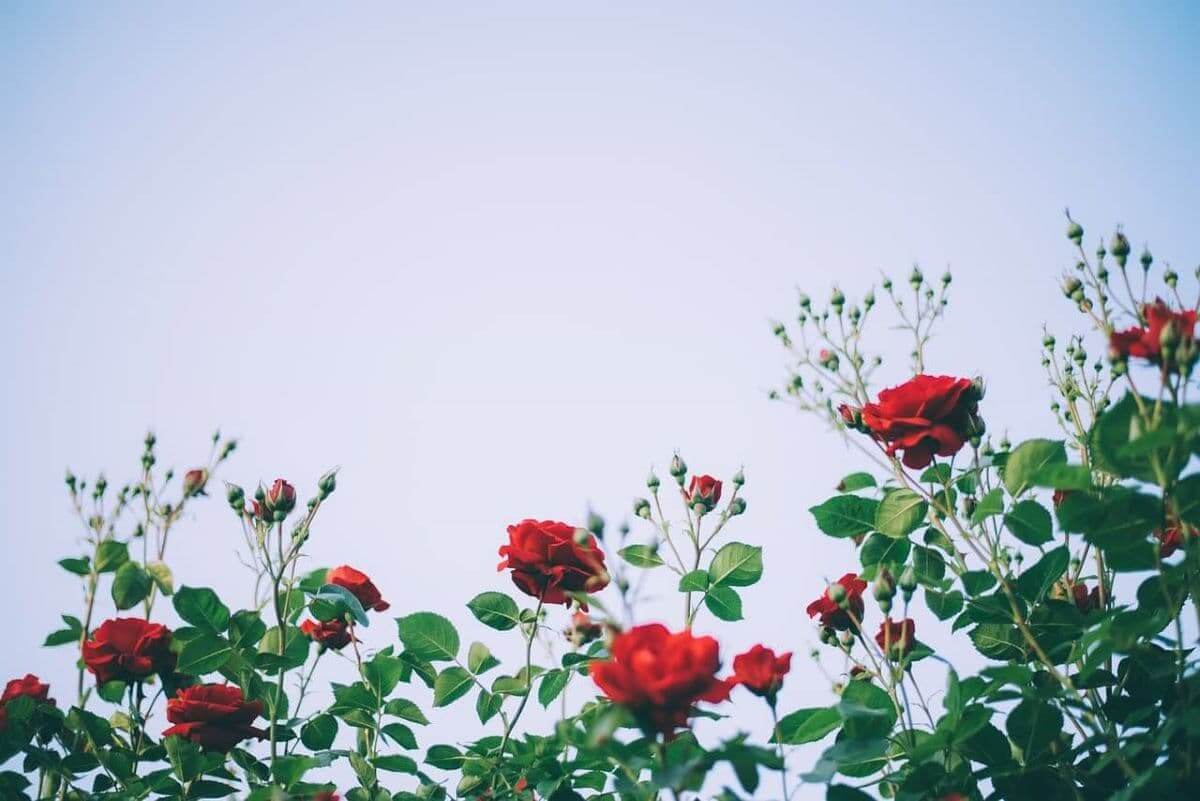 George Herbert’s poem ‘Virtue’ is a compact poem on the abstract concept of virtue. Herbert chiefly talks about “a sweet and virtuous soul” that remains forever even if the sweet things of nature are prone to decay and loss. According to the speaker of this piece, virtue is the thing that keeps the good side of the spirit alive. To make this point clear, Herbert uses a few contrasts. Apart from that, this poem is musical and highly structured just like any other poem from the Jacobean era.

‘Virtue’ by Geroge Herbert describes how the day, rose, and spring, all the beautiful things of nature, are inconstant in comparison to “a sweet and virtuous soul”.

This poem begins with a reference to the “sweet day”. Though it is so cool, calm, and bright, in the eve its beauty fades away. A rose which bids a rash gazer wipe his eye, its root is embedded in one’s grave. It means that the flower will also die in the future. Likewise, spring is also transient. The season comes for a short period of time each year. Then it bids goodbye to all. At the end of the poem, Herbert says the virtue of one’s soul is everlasting. It chiefly lives even though the whole world turns to coal.

Herbert’s poem is about the importance of nourishing virtue in a person’s soul. In this poem, he uses several ideas to bring home his point. By using this means, he tries to highlight what is the need of the hour. According to the poetic persona, every beautiful thing of nature is prone to change. Nothing will remain except the virtue that a person keeps in his soul at some point of time. So, being virtuous is the only way to gain immortality. Herbert points to the transience of a sweet day, rose, and spring to emphasize this point.

The poem ‘Virtue’ is highly structured. It has a set rhyme scheme and meter. To begin with, Herbert uses the ABAB rhyme scheme in this poem. For example, in the first stanza, “bright” rhymes with “to-night” (lines 1 and 3), and “sky” and “die” rhyme together (lines 2 and 4). This scheme is maintained throughout the piece for creating an internal contrast between the lines.

Herbert uses the following themes in this poem: virtue, transience vs eternity, and nature. The theme of virtue is portrayed by the last four lines of the poem. These lines point to the fact that if one keeps a virtuous soul, nothing can stop it from attaining immortality. Besides, Herbert makes use of the theme, transience vs eternity, throughout the piece. In the first three stanzas, he describes how natural objects are prone to change. Those things don’t remain constant. In contrast, a virtuous soul exists even if the whole creation burns out. The fire of worldliness can touch the concrete, not the abstract. Virtue creates a durable layer of protection around the soul.

Sweet day, so cool, so calm, so bright,

The bridal of the earth and sky;

The dew shall weep thy fall to-night,

For thou must die.

George Herbert’s poem ‘Virtue’ is a poem related to the spirit. It talks about how to nurture the soul in order to gain immortality. To begin with, Herbert first refers to the “Sweet day”. Readers can see that the poet begins each stanza with the word “sweet”. So, he is also accepting that the beautiful things of nature are sweet to look at with worldly eyes.

He paints a beautiful picture of a morning (or day) that is cool, calm, and bright. So, it can be a reference to a spring morning. In the following line, Herbert uses a metaphysical conceit in “The bridal of the earth and sky.” In this way, the “day” is compared to a priest. The marriage between the earth and sky takes place in its presence.

In the third line, the poet uses a symbol of transience, a “dew”. He personifies it and invests it with the idea of weeping. According to him, the dew will weep the day’s fall at night. The last line emphasizes that the day must die. It is a cycle that none can change.

Thy root is ever in its grave,

And thou must die.

In the second stanza, Herbert talks about the “sweet rose” that is the symbol of both beauty and change. To depict its bright red color, he uses a symbol. The phrase “angry hue” depicts its color symbolically. Moreover, the red color of the rose symbolizes bravery.

In the following line, the poet says that the color of the rose is very contrasting. It makes a “rash gazer” wipe his eye. This line means that the brightness of the flower blinds the onlooker’s eyes. So, he wipes his eyes to look clearly.

The third line of this stanza creates a stark contrast with the previous lines. It says that the root of the plant is its grave. Herbert uses synecdoche to refer to the earth where a person’s grave lies. Through this line, he clarifies that the flower is prone to death no matter how beautiful it is. The following line stresses this idea.

A box where sweets compacted lie;

My music shows ye have your closes,

And all must die.

The third stanza describes how the spring season is “full of sweet days and roses”. This stanza makes it clear that the overall poem is set on the theme of spring. For example, readers can find references to the cold and calm day, a sweet rose, and the spring. So, Herbert mostly uses the stock images of spring to talk about the importance of virtue.

According to him, the spring is full of sweetness. It is like a box (another metaphysical conceit) that is filled with sweets. However, this poem shows how this season has to die. Spring comes for a short period with its sweet and aromatic days. Its transience is portrayed in this stanza.

The tone of this section is authoritative as here the speaker utters “My music shows ye have your closes/ And all must die.” So, it sounds like the speaker is proclaiming a universal death and it is absolutely true. All must die. It sounds harsh. But, it’s a fact. The reference to the poet’s “music” refers to another important idea. It portrays the everlastingness of art, especially poetry.

Only a sweet and virtuous soul,

But though the whole world turn to coal,

The last stanza of ‘Virtue’ contains the main idea. In this section, Herbert focuses on the “sweet and virtuous soul.” This line points at two qualities: kindness and virtue. So, one has to nurture those qualities in the soul in order to get immortality.

In the following line, Herbert presents a simile. Here, the comparison is made between a virtuous soul and “season’d timber”. So, virtue makes one’s spirit strong and durable like a seasoned timber. Even if the whole world turns into coal, a virtuous soul lives forever.

Herbert establishes a connection between timber and coal beautifully in this section. Besides, the last line emphasizes the idea of immortality that can be only gained if the soul remains virtuous throughout its earthly journey.

The poem ‘Virtue’ was published in the collection of Geroge Herbert’s poems “The Temple: Sacred Poems and Private Ejaculations”. Herbert sent his poetry to his friend Nicholas Ferrar shortly before his death. Ferrar published those poems in the mentioned poetry collection of George Herbert in 1633. All of his poems are on religious themes and contain exceptional metaphysical conceits. His ‘Virtue’ is also based on this theme. It contains visual imagery (conceits) that depict how beautiful natural things are not permanent. Their impermanence makes readers realize the importance of virtuousness.

What is the meter and rhyme scheme of ‘Virtue’ by George Herbert?

Herbert’s virtue is written in iambic tetrameter and iambic dimeter. The rhyme scheme of this piece is ABAB.

What is a “virtuous soul”?

A “virtuous soul” means one who is good, righteous, honest, kind, and pure at heart. Herbert refers to a person who nurtures certain divine virtues in his soul.

What are the dewdrops compared to and why?

The dewdrop is compared to a person who weeps at the day’s parting. Herbert personifies it to make a comparison between tears and dew drops.

What does the “Sweet day,” “rose,” and “spring” symbolize in the poem?

Herbert uses these words as a symbol for natural beauty, change, and transience.

Why shall the dew weep on its end?

The dew weeps at the parting of day and the coming of night. It weeps as the day is about to end during the evening.

Here is a list of some poems that tap on the similar themes present in George Herbert’s religious poem ‘Virtue’.

You can also read about these moving poems on change and the best-loved spring poems.