George Meredith was born in Portsmouth, Hampshire, England in February of 1828. He was the son of a tailor and lived with his parents above the family shop. That is until his mother died when he was five years old. He inherited a small amount of money from his mother that allowed him to attended a local seminary and begin to take on the qualities of a “gentleman.” Unfortunately for the young Meredith, who harbored goals of being accepted into upper-class society, his father’s shop when bankrupt. In the wake of this change, Meredith’s father married the family’s housekeeper. 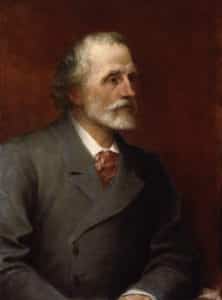 When Meredith was fourteen he attended a Moravian School at Neuwied on the Rhine River. The land on which the school was situated was picturesque. It is thought that these landscapes stuck with the young man for the rest of his life, making their way into his later works. Within the institution, he was educated in religion and humanism. He learned to love nature and seek out peace.

Meredith returned to England four years later at the age of 16. This was the end of his formal education, he was largely self-educated.  By the time he was 18 he was the apprentice to a solicitor and had supposedly begun a career in law. It is clear from the path of his life and writings that he never truly pursued this option though. In 1849 he married Mary Ellen Nicolls. Unfortunately, she left him ten years later, running off with the Pre-Raphaelite painter Henry Wallis for whom Meredith had posed.

His first book of poems was published in 1851 and was titled, Poems. Later he would publish the collection of sonnets titled, Modern Love. These are among his best-known poems. The loss of his wife inspired these pieces as well as his first serious novel,  Ordeal of Richard Feverel.

Meredith remarried in 1864 and moved to Surrey. He continued to write works that were deeply inspired by nature. It was not until 1885, with the publication of Diana of the Crossways that Meredith saw any commercial success. Gaining an audience was a consistent struggle. Meredith died in May of 1909 at the age of 81.