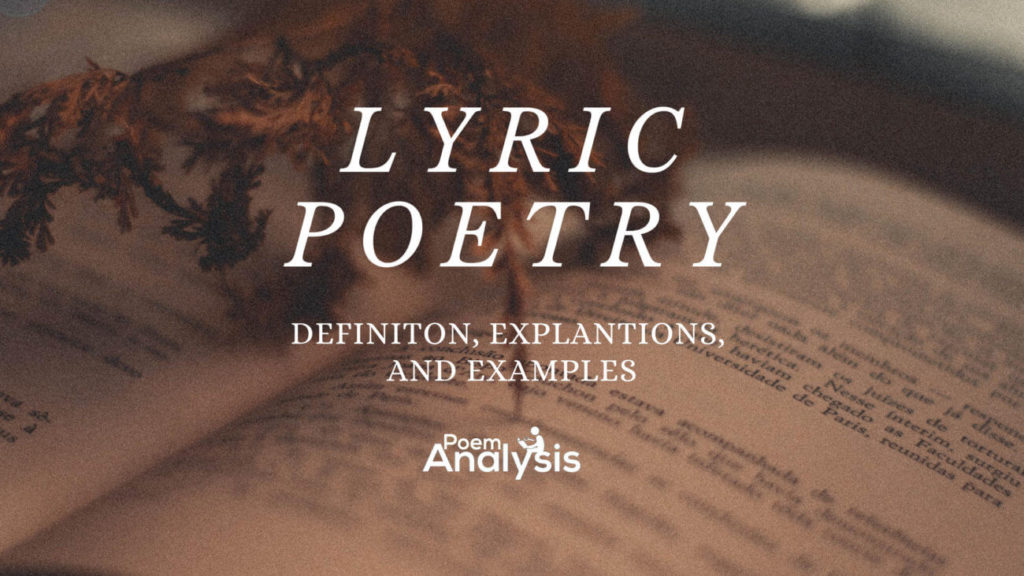 Rather than telling a cohesive story, many lyric poems are meditations on specific states of mind or emotional experiences.

While working on a lyric poem, writers make use of a number of poetic techniques, including rhyme, meter, repetition, alliteration, and assonance or consonance to imbue a poem with musical qualities. The more unity a poem has, the easier it will flow and more it will seem as if it could be set to music. There is no single form a lyric poem has to be written in. From sonnets to villanelles, anything can qualify as long as the text uses emotion as its primary driving force.

One of the most important techniques is the meter. Writers can make use of any combination of metrical patterns, from iambic and trochaic to anapaestic and pyrrhic. Each one can bring something different to a poem.

Although not always the case, often these poems are written from the first-person perspective. Sometimes, through historical details, or contextual ones, a reader can infer that the poet is speaking about themselves. But, more often than not it is safer to assume the poet is taking on a persona for that particular poem.

Why Do Writers Write Lyric poems?

Lyric poetry, to those with a passing interest in the everchanging world of poetry, contains many of the features that one might relate to “poetry”. The poems are emotions, first-person confessions, and admissions, they contain flowery language and lovely turns of phrase. The poems are beautiful and simple, complex, and deep. They have everything that lovers of poetry enjoy about the genre. As long as a poem uses emotions as the primary subject matter, the poem can be classified as “lyrical”.

Why write about emotions? Well, what else is more tied to the human experience? What else could readers relate to more? Emotions are at the root of what makes us human. As many lovers of poetry would say, poetry is a way of understanding the world and navigating through it. No other genre does this better than lyric poetry.

As stated above, repetition, as well as a range of other literary devices are used in lyric poetry to help convey a particular emotion and increase the musicality. Let’s take a look at the first two stanzas from ‘Do not go gentle into that good night’ by Dylan Thomas as an example.

Do not go gentle into that good night,

Old age should burn and rave at close of day;

Rage, rage against the dying of the light.

Though wise men at their end know dark is right,

Because their words had forked no lightning they

Do not go gentle into that good night.

From these lines, a reader will notice that Thomas made use of almost all of the techniques mentioned in the introduction of this article. Alliteration, or the use of words beginning with the same letter in close succession, appears in the first line, with the use and reuse of “g” (then again in other lines as well). There is a general use of repetition through the refrain “Do not go gentle into that good night”. Plus, there is a very simple, consistent rhyme scheme of ABC ABC.

Example #2 Whose List to Hunt by Sir Thomas Wyatt

Of all the forms that lyric poems take, the sonnet is the most popular. It is also the choice structure of Thomas Wyatt within his most famous poem, ‘Whoso List to Hunt’. The poem uses a hunting metaphor to describe a suitor’s effort to catch or gain the affections of, a woman. As the poem progresses, the hunter gets more and more desperate. His emotions take control and he follows her wherever she goes. He cannot get her out of his mind, no matter how unhealthy the situation is. There is a secondary, historical/contextual layer to ‘Whoso List to Hunt’ that you can read about here.

Aside from being a sonnet, and speaking originally and interestingly on an emotional experience, the text itself is quite beautiful. Take a look at these lines from the second quatrain:

Yet may I by no means my wearied mind

Draw from the deer, but as she fleeth afore

Since in a net I seek to hold the wind.

In these lines, Wyatt’s speaker, who is likely Wyatt himself, is describing his inability to let the deer go. Even though he is weak, exhausted mentally and physically, he can’t help but follow her. A reader should take pleasure from briefly delving into the speaker’s obsession, as well as in the way the words come together, using techniques such as alliteration and caesura.

Example #3 I Felt a Funeral, in my Brain by Emily Dickinson

Emotions do not get more poignant or powerful than those presented by Dickinson in this short poem. Throughout the text of ‘I Felt a Funeral, in my brain’ Dickinson depicts the thought process of someone who is, or believes they are, going insane. The pattern of the lines, the line breaks, and the capitalized words all place emphasis on the speaker’s uncertain state of mind. Here are a few lines from the beginning of the poem:

I felt a Funeral, in my Brain,

And Mourners to and fro

That Sense was breaking through –

And when they all were seated,

My Mind was going numb –

The prevalence of meter and sound in lyric poems is obvious in this section of verse. Take a look at lines three and seven. In these parts of the poem Dickinson uses dashes to separate out the words “treading” and “Kept treading”. This focuses a reader’s attention on them, mimicking the sound of the mourner’s feet on the ground and the pounding of the speaker’s mind.

This poem is a Petrarchan sonnet. It has fourteen lines and maintains the proper rhyme scheme and metrical pattern assigned to that verse form. The lines are also split with a turn in the middle. Throughout this poem, Wordsworth expresses his very passionate and personal opinion about industrialization. Here are the first five lines of the poem:

The world is too much with us; late and soon,
Getting and spending, we lay waste our powers;—
Little we see in Nature that is ours;
We have given our hearts away, a sordid boon!
This Sea that bares her bosom to the moon;

The speaker, who is certainly Wordsworth himself, is expressing his outrage and disappointment over a general move away from nature and towards industry.

Lyric poetry originated in different forms around the world. The word “lyric” originates from the word lyre which refers to a stringed instrument, similar to a harp. Today, contemporary readers might be familiar with the ancient Greek poet Sappho who wrote deeply moving poems on love and loss that still resonate with modern audiences.

In ancient Greece, lyric poems did not just sound musical, they were always accompanied by music. This means either the lyre, cithara, or barbital, all stringed instruments. Variations of lyric poems also came from the Middle East and Asia.

Take a look at this list of other popular lyric poems: