‘kitchenette building’ is based around Brook’s own experiences in Chicago living in small housing complexes and in the very kitchenette buildings that she mentions in the poem. A “kitchenette” was a tiny apartment that was created by dividing up already existing apartments. This meant that the living space was very minimal.

During this time period, African American families in Chicago, and around the world, were the victims of discriminatory housing practices that meant that Black families were often housed together in the worst neighborhoods and in the smallest, least cared for apartments. Rather than directly call out these practices as racist, she presents her personal experiences as evidence of racism. 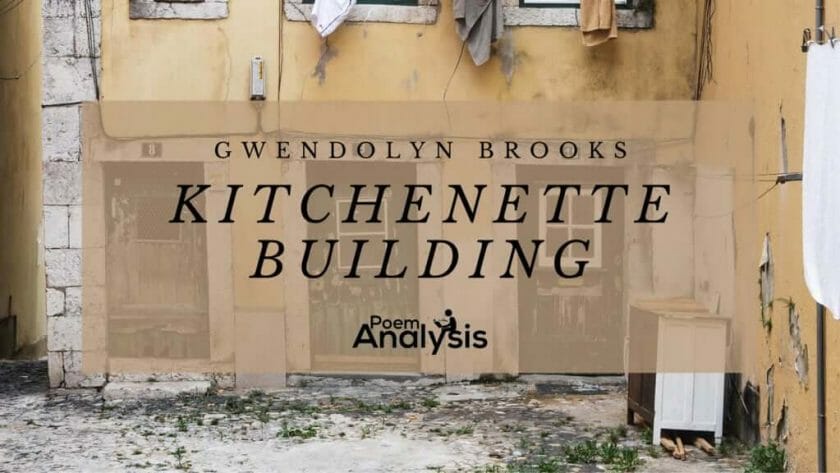 ‘kitchenette building’ by Gwendolyn Brooks is a moving poem that alludes to the racial wealth gap in Chicago in the early to mid-1900s.

Throughout this poem, the speaker describes the day to day life of a group of people who are living in poverty. The “we” that Brooks uses in the poem encompasses everyone in this speaker’s vicinity. No one she knows can afford to spend time on dreams, not when there are much more important things to focus on like “rent” and family needs.

In ‘kitchenette building’ the poet engages with themes of poverty, dreams/hopes, as well as dissatisfaction. She does not spend a great amount of time focusing on the last of these, dissatisfaction. It is something that is implied through her description of the day to day life of this speaker. She clearly wants more and likes the idea of a dream but has no time or space to let one into her life.

Her poverty is a defining factor in the way she lives. Her life is a constant battle for survival in amongst other families who are seeking out the same basic resources. They are all dreaming of a better life, but only in the vaguest way. They have to focus on making it through the next month.

‘kitchenette building’ by Gwendolyn Brooks is a four stanza poem that is separated into sets of three and four lines. The first, third, and fourth stanzas all have three lines in them while the second is extended to four lines. Brooks chose to make use of free verse in this poem, although there are some examples of rhyme. For instance, the first and last lines of each stanza are perfect rhymes. This increases the musical quality of the poem. As is the case with free verse poems, there is no metrical pattern to be found. This makes the lines a bit more chaotic.

In ‘kitchenette building’ Brooks makes use of several literary devices. These include but are not limited to personification, juxtaposition, and imagery. The first of these, personification, is seen towards the end of the poem when the speaker describes a dream like a child. It has to be cared for tenderly and consistently so that it doesn’t wither away and die. This part of Brooks’ very skilled use of imagery. More examples can be seen in the second stanza when she brings the dream in amongst the sights and smells of the kitchen.

A reader can also take note of the use of juxtaposition in these lines. It is clear, from the speaker’s description, that a dream is very different in nature from the world that she lives in on a day to day basis. Brooks juxtaposes the dreams clear, pureness against the garbage in the hall, and the concern for lukewarm water.

We are things of dry hours and the involuntary plan,

In the first stanza of ‘kitchenette building,’ the speaker begins by describing herself and those around her as “things”. It’s unclear at first why she does this or who else she’s thinking of. But, these people are the subject of “dry” or boring “hours” and “involuntary plans”. This suggests that they are part of a plan that they didn’t have a hand in. They are “Grayed in” she adds, and “gray”. They are controlled by the mundanity, and perhaps suffering, of their lives and they are themselves “gray,” as if that gray-ness as seeped into them.

In the speaker’s world, the word “Dream” is a privilege that they don’t have. It’s a “giddy sound,” something lighthearted but far from reality. Instead, the words that have the most meaning in their lives are ones like “feeding a wife” and “rent”. They are concerned, because they have to be, with making it from one day to the next. This is the life of those living in the kitchenette apartments in Chicago in the 20s and 30s.

But could a dream send up through onion fumes

Flutter, or sing an aria down these rooms

In the second stanza of ‘kitchenette building,’ the speaker poses a hypothetical. She uses imagery to describe the dream and bring in a depiction of the day to day sights and smells of the building. The dream is pretty, “white and violet” and maybe, she wonders, it can rise above the “onion fumes” and “fried potatoes”. Can it outlast all of this? As well as yesterday’s garbage and still be able to “Flutter, or sing an aria down these rooms”. These lines are still part of the rhetorical question that started in line one.

Brooks juxtaposes the dream, its beauty, and lightness, against the heavy stench of garbage and cooking. She doesn’t know if dreams can survive in this environment.

Even if we were willing to let it in,

Anticipate a message, let it begin?

One of the issues with the dream’s survival might be the people themselves. Their lives are so hard, the notion of a dream might be hard to accept or “let…in”. Brooks persons the dream in the next lines, describing it as something, perhaps a child, that has to be cared for. Someone who had a dream would need to “keep it very clean” and “warm it”. This is the only way to keep it from falling apart. Is it possible that they would be able to ever “let it begin?” Is there a time when the dream could take flight on its own and actually come into reality?

We wonder. But not well! not for a minute!

We think of lukewarm water, hope to get in it.

The poet goes back to using “We” in the first line of the last stanza. “We,” those who live their lives in poverty in tiny apartments “wonder” if it’s possible for dreams to come true. But, they don’t do it for very long. Before they know it its time to go back to life and focus on what matters at the moment. That is, the bathroom and the “lukewarm water” they’re hoping to get. These lines bring the reader back to reality. Dreams are something that this speaker and those she knows can’t afford.

There are many moving poems out there about poverty and the struggle for day to day survival. Numerous poets have experienced poverty for themselves and memorialized those experiences for future generations. Others saw it around them and penned their reactions to the sights they saw. Readers should look to the following poems for more examples: ‘Your Riches — taught me — Poverty’ by Emily Dickinson, ‘Holy Thursday’ by William Blake, and Anna Lætitia Barbauld’s ‘To the Poor’.

In ‘kitchenette building’ Brooks also explores dreaming and what it means to have hopes and desires for oneself. Some other interesting poems include: ‘To Hope’ by John Keats and ‘Work without Hope’ by Samuel Taylor Coleridge.