The Bean Eaters by Gwendolyn Brooks

Published in 1960, ‘The Bean Eaters’ is one of Brooks’s best-known poems and the title poem of one of her most important collections. This poem is one of many in the collection that seeks to outline and explore the lives of the men and women living in Chicago’s south side. In ‘The Bean Eaters’ Brooks focuses on themes of social isolation, economic struggle, and inequality. 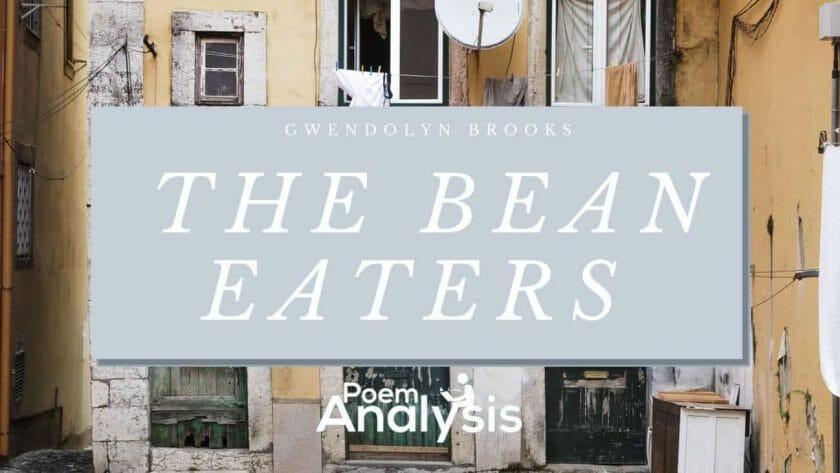 Summary of The Bean Eaters

‘The Bean Eaters’ by Gwendolyn Brooks is a short, thoughtful poem that sadly and simply describes the lives of an old, poor couple.

The three stanzas of ‘The Bean Eaters’ take the reader into the lives of an older couple who are spending their last days alone together eating beans. The beans are only one way in which Brooks depicts their poverty in the text. They can’t afford much, making do with the broken plates and old furniture they have in their rented room. The two drift into the background at the end of the poem as the speaker focuses on their meager belongings. They are forgotten by the reader, just as they’ve been forgotten by everyone else.

Structure of The Bean Eaters

‘The Bean Eaters’ by Gwendolyn Brooks is a three-stanza poem that is separated into sets of four lines, known as quatrains and one final three-line stanza known as a tercet. These quatrains follow a loose rhyme scheme of AABA BCDC EFF but do not conform to a specific metrical pattern. This makes sense for the overall content of the poem. It is simple and straightforward without overly complex syntax, diction, or meter.

Literary Devices in The Bean Eaters

Brooks makes use of several literary devices in ‘The Bean Eaters’ these include but are not limited to anaphora, alliteration, and imagery. The latter is one of the most important techniques at work in the poem. Imagery refers to the elements of a poem that engage a reader’s senses. Traditionally, the word “image” is related to visual sights, things that a reader can imagine seeing, but imagery is much more than that. It is something one can sense with their five senses. One of the best examples comes in the last lines of the poem as the speaker drifts away from the couple and focuses in on the possessions that surround them.

Alliteration occurs when words are used in succession, or at least appear close together, and begin with the same sound. For example, “twinklings and twinges” in stanza three. The examples of repetition also create instances of alliteration. Such as “Plain” in line three of the third stanza.

Brooks also makes use of anaphora, or the repetition of a word or phrase at the beginning of multiple lines, usually in succession. This technique is often used to create emphasis. A list of phrases, items, or actions may be created through its implementation. For example, the use of the word “Two” at the beginning of lines one and two of stanza two.

Analysis of The Bean Eaters

Dinner is a casual affair.

In the first stanza of ‘The Bean Eaters,’ the speaker begins by describing an old couple as an “old yellow pair”. These two are sitting down to eat, as they always do, casually. They usually eat “beans” and that’s what they’re eating now. The couple has very little money, something that is not stated outright but is alluded to through their possessions and their casual dining. They eat beans, not because they want to, but because of its all that they can afford. They eat off off “chipware,” or chipped plates on an old table that’s creaking with age.

The word “plain” is used twice in the third line of this stanza, something that is meant to immediately draw a reader’s attention. It’s also immediately clear in this poem that the two are poor, not because they’ve spent all their money, but because this kind of life is all they can afford. This poem relates back to others in the collection which explores the racial wealth gap.

Two who are Mostly Good.

And putting things away.

These two people sitting alone in their house are “Mostly Good”. They do what they can to live a good life. They make it from day to day and continue to put away their clothes. This description relates to the more important desire to see the day through and then see what the next has to offer, even if everything looks bleak.

Remembering, with twinklings and twinges,

The third stanza is different than the two which have come before it. It starts out with the speaker describing the two as “remembering” They do this a lot. In fact, the speaker alludes, this is what they spend most of their time doing. They think about the past and the “twinklings and twinges,” the good and the bad times.

The last line of the poem is extremely long. It reaches all the way to the end of the page and then is forcibly indented down to the next in most versions of the poem. It lists out, a technique known as accumulation, the things that the two have around them. Their “rented back room,” (another allusion to their poverty) is filled with “receipts” and old crumbs, vases, and “fringes”. There are “dolls” from their youth or a child’s youth, and “cloths”. There is a bit of everything and nothing really of value.

As the poem concludes, the focus shifts away from the old couple and to everything that belongs to them. They fade out of focus and the reader is left with the images of trash and refuse that are leftover from better, or perhaps worse, times. The two are for the most part forgotten, a deeply sad ending to an already depressing poem.