Helen Hunt Jackson was born in Amherst, Massachusetts in October of 1830. Her full birth name was, Helen Maria Fiske, and she was the daughter of Nathan Welby Fiske and Deborah Waterman Fiske. Her father worked in a variety of fields, including as a professor of Latin, Greek, and philosophy. Jackson’s parents also had another girl and two boys, both of whom died shortly after birth.

When Jackson was only fourteen her mother died as well. This tragedy was followed by the death of her father three 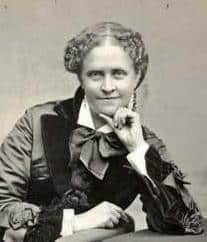 years later. Jackson fell under the care of an uncle who had her attend the Ipswich Female Seminary, as well as a boarding school in New York City. She was enrolled alongside fellow poet, Emily Dickinson. The two became, and remained, close friends.

In 1852, Jackson married an army captain by the name of Edward Bissel Hunt. Together they had two sons. Edward was killed eleven years later in an accident involving an invention he was working on. Both of the children died while they were still young as well.

Jackson’s poetry is noted for its intense sorrow and feelings of loss. In an effort to escape from her ruined life, she moved to Newport in 1865. It was here that she first began to write seriously. Her first successfully published poem, ‘Coronation,’ appeared in The Atlantic three years later. She would go on to publish in The Nation, The Century, and Independent.

In 1875, after moving to Colorado, she married William Jackson. He was a banker and railroad executive. Jackson wrote prolifically, but her earliest works were published under the name, H.H. Today she is remembered for her efforts to shed light on the plight of the Native Americans. One of her best-known works, A Century of Dishonor, speaks on the “Indian policy.” This was the first work published under her own name and she sent a copy to every current member of Congress.

Jackson’s later works were written after she retired to California. One of these included, Ramona, the story of an orphaned Native American youth struggling for the right to her own land. It was extremely successful and drew many readers into Southern California in an attempt to learn more about the characters and landscape.

Helen Hunt Jackson died in 1885 of stomach cancer. She now rests in the Evergreen Cemetery in Colorado Springs, Colorado.