Henrik Ibsen was born in Skien, Telemark, Norway in March of 1828. His parents, Knud Ibsen and Marichen Altenburg were upper-class merchants who lived in the small town Skien. The beginning of Ibsen’s life was marked by wealth, but when he was seven his father’s fortunes took a turn and the family had to sell their building in Skien and move to Venstøp. From there they moved on to Snopetorp.

It has been noted that Ibsen’s later writings were deeply influenced by his father’s financial losses. There are a number 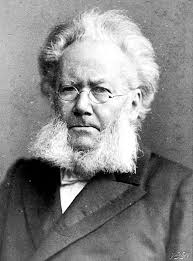 of instances within his dramas in which finances play a major driving role in the narrative. When Ibsen was 15 years old he had to leave school to become an apprentice to a pharmacist. It was during this time period that he began to write plays. Three years later, when he was 18 he met, and fathered a child with, Else Sophie Jensdatter Birkedalen. Father and son never met, although Ibsen did pay for the child’s initial upbringing.

After this affair, Ibsen moved to Christiania, now known as Oslo, where he meant to start university. This idea soon came to pass as he knew writing was his true passion. It was in 1850 that his first play was staged. It was titled, The Burial Mound and did not receive much attention from critics or the public at large. From his early career, Ibsen is known to have cared deeply for Norwegian folk tales as well as the work of the author Henrik Wergeland, who was a very well-read author when Ibsen was young.

Henrik Ibsen spent the following years of his life working at the Det norske Theater in Bergen, Norway. His job there allowed him to have a hand in the production of more than 145 plays. In some instances, he was a writer, in others a producer. He also continued to published during this period. He released five plays that are not considered important to his oeuvre.

In 1858 Ibsen returned to Christiania where he became the creative director of the Christiania Theatre. He also married Suzannah Thoresen, with whom he would have one child the next year. The couple was not well off financially and Ibsen eventually moved to Italy where he would live for the next 27 years.

It was with the publication of his next poem, Brand, that Ibsen finally acquired some of the acclaims he had been looking for. It was followed by one of his better-known works, Peer Gynt. In 1868 he moved to Dresden where he continued to write, producing the best work of his career. While there he wrote Emperor and Galilean. A drama that tells the story of the Roman emperor Julian the Apostate.

In 1875 he move to Munich and started the contemporary realist work, The Pillars of Society. This move to depicting the real world marked a change in his writing which led to A Doll’s House in 1879. The play Ghosts, followed in 1881.

Ibsen’s 1882 work, An Enemy of the People, is one of his most daring. In this drama controversy is the driving force behind the narrative. He explores the power of the individual and asserts that one person is more often correct than a group of people. He was seeking to speak out against conservatism and liberalism and the self-serving nature of society.

Although An Enemy of the People was considered a fine work, it was The Wild Duck that came to be known as Ibsen’s masterpiece. It is a complex story the tells the life of Gregers Werle. This young man returns to his home from exile and discovers truths about his friends and family he did not expect. Ibsen’s writing, particularly in this piece, is noted for its use of irony.

Towards the end of Ibsen’s writing career, his plays become more introspective. He wrote Hedda Gabler and The Mast Builder, two pieces that explored mental conflicts and one’s own ability to confront how they are living their life.

Henrik Ibsen died in May of 1906 in his home in Christiania (Oslo). He succumbed to death after suffering a series of strokes. Ibsen was buried in Vår Frelsers Granlund, or “The Graveyard of Our Savior,” in Oslo. Since his death, his plays have only grown in popularity. They are performed to this day and a number of awards have been created in his name. These include the International Ibsen Award and the Ibsen Centennial Commemoration Award.