Henry Cuyler Bunner was born in August of 1855 in Oswego, New York. His parents, Rudolph Bunner, Jr. and Ruth Tuckerman provided Bunner with a relatively comfortable childhood as they were decently well off financially. His grandfather was Rudolph Bunner, was a member of the US House of Representatives.

Little is known of Bunner’s early years, but he was educated in New York City from a young age. He was not a 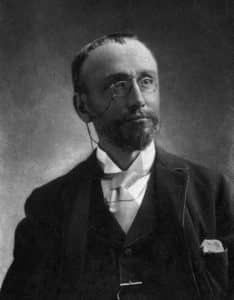 student of any great note and found work as a member of the clerical staff at an importation house. This career was short-lived as he felt that he had more to offer to the world through his writings. A short time later he acted on this belief and turned to journalism as his new financial support structure.

By the time he was eighteen years old, he was involved in a literary apprenticeship with the publication, Arcadian. After this, he worked for Puck, the first popular humour magazine in the US, which was just gaining its footing. It was known for its political cartoons and satire.

He spent the majority of his short career working for this publication, eventually becoming the editor. The writing he produced during this time period was known for its clear style, and frequent confrontations with political corruption and criminality.

In the early sixties, Bunner was married to Alice Learned. Together the couple would have four children, two of whom died before the age of two.

The first work of note that Bunner produced was a story titled, ‘The Midge,’ published in 1886, in Scribner’s Magazine. This short story tells of New York City life around South Fifth Avenue. It was followed with The Story of a New York House, in 1887. Throughout the ‘90s, Bunner published a number of different short stories and sketches. These were among some of his most widely read and enjoyed works.

This decade was also filled with the publication of collections of verse. These included Airs from Arcady and Elsewhere, and Poems. Despite all these collections, Bunner is best known for a play that he wrote in 1883 titled, The Tower of Babel.