Henry David Thoreau was born in Concord, Massachusetts on July 12th, 1817. His mother was Cynthia Dunbar, and his father, John Thoreau, was a pencil maker. He grew up in a home of modest means, with three other siblings. He had an older brother, an older sister, and a younger sister all of whom lived together in the family home on Virginia Road, a site that still exists today. 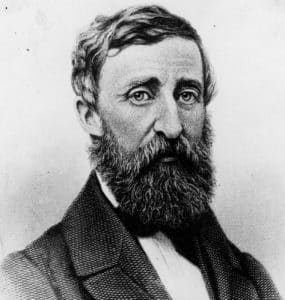 Thoreau attended a public school in Concord and then later a private academy. He was the most skilled academic among his siblings and went on to attend Harvard College. He graduated from the college in 1837 but considered himself unsuited for the traditional pursuits of the time, medicine, law, or the church. Thoreau did feel a pull towards the academic and briefly took a job teaching at the Concord public school. He resigned soon after from the post as he refused to administer corporal punishment.

In the years that followed, Thoreau and his brother John opened a progressive grammar school, but in an unfortunate turn of events, John contracted tetanus after cutting himself shaving and died in 1842. It was around this same period of time that Thoreau met the writer Ralph Waldo Emerson. Emerson became a mentor to Thoreau and introduced him to other writers such as Nathaniel Hawthorne and Margaret Fuller; he also encouraged the young man to contribute work to local publications. Thoreau published his first essay titled, ‘Aulus Persius Flaccus,’ in July of 1840. It was during the early years of his writing career that he first began his following of Transcendentalism.

The next year Thoreau moved in with Emerson and worked as a repairman and gardener to support his writing career. This only lasted for a brief period before he returned to Concord to work in his father’s pencil factory. It was in March of 1845 when Thoreau, frustrated with the confines of his daily life, decided to embark on his two years of simple living in Walden Woods. He built a small house on land which was owned by Emerson, near Walden Pond.

While living in Walden Woods, he hoped to write his first book, ‘A Week on the Concord and Merrimack Rivers,’ a goal which was realized. He was also striving to devote as much of his time as possible, six days out of the seven, to the contemplation of Transcendental ideas. In 1846 he began his studies of the surrounding natural environments and started composing ‘Walden’ as an essay addressing the questions of the local townspeople who wondered why he was living in the woods.

Another important event of Thoreau’s life occurred during this time. He was arrested for tax evasion and made to spend a night in jail.  It was this brief experience that would become the subject for his essay, ‘Civil Disobedience.’ Thoreau was able to finish his novel, ‘A Week on the Concord and Merrimack Rivers,’ and he published it in 1849 after leaving his cabin. He waited to publish ‘Walden’ for another five years later because ‘A Week on the Concord and Merrimack Rivers,’ had sold so poorly.

The next years of Thoreau’s life were once more spent in the Emerson family home. He lived there for two years while Emerson toured and continued to work in the pencil factory. Thoreau also took on odd jobs like surveying and lecturing. He continued to publish essays in various publications. He never came into very much money, and maintained a private lifestyle.

Thoreau left the Emerson house in July of 1848 and briefly lived nearby. Two years later he moved into a new house with his family where he would reside until his death. That same year Thoreau took his only trip outside of the United States, to Canada. He visited Quebec City and Montreal. These journeys would later inspire him to write a series of lectures which became, ‘A Yankee in Canada.’ Thoreau’s interest in natural history only increased as he aged. He was known to keep journals of his observations around town, which became the basis for essays such as, ‘Wild Apples’ and ‘Autumnal Tints.’

Thoreau was increasingly seen to be as much a philosopher as an ecologist. He also became a fervent abolitionist in his later years and wrote a speech about John Brown, the martyred leader of the failed slave revolt in Virginia, in 1859.

Many years previously, in 1835, Thoreau had contracted tuberculosis. It was an illness he had struggled with for a long time. Eventually, after an excursion into the woods to count tree rings in the rain, he developed bronchitis. This only added to his already declining health, and he became bedridden. The final years of his life were spent writing letters, revising his manuscripts, and petitioning for the further publication of his works. After suffering from illness for an extended period of time, he died in May of 1862.  You can read Henry David Thoreau’s poems here.